Well a wake up call was well and truly delivered in this match with Redcar claiming a deserved victory against a very under par Stockton. Stockton went into the game without forwards, Kallum Hannah, Tony Johnson and Macca Langstaff through injury, Matty Garbutt holidays and the returning Tom Coulthard making the bench for the first time since the League Cup Final last season.

The early exchanges saw Stockton control possession and force a couple of early corners that came to nothing. The game then became a midfield battle with Stockton making the better chances but Redcar looking lively on the break. The first real chance came Stockton’s way when Fleming in Redcars goal tipped round the post and then from the resulting corner he had to back pedal to tip over the crossbar. The next chance came Redcars way but having worked an opening 25 yards out the shot was weak and drifted well wide. Stockton were making their pressure tell and from a right wing corner Adam Nicholson headed back across goal for Stav Roberts to shoot , but this was blocked on the line and scrambled to safety. 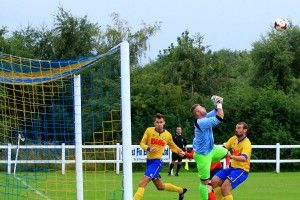 James Fleming in Redcars goal was forced into some early saves to keep the scores level.

There was a moment of controversy on the half hour mark when a Stockton attack developed on the edge of the Redcar area, Fleming came racing out to collect and his momentum carried him outside of his box. He released the ball as soon as he realised but then as the ball fell to Max Craggs 20 yards out he reclaimed the ball in what appeared to be a deliberate action to prevent Stockton the opportunity to score. Free kick awarded and as everyone in the ground expected a red card the Referee produced only a yellow, the free kick hitting the wall and cleared. As half time approached Stockton continued to press and Redcar were dangerous on the break. 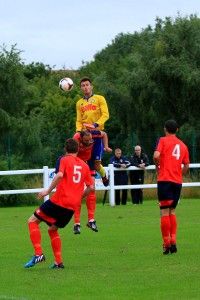 The second half started with Redcar dominating possession and making it difficult for Stockton to get their foot on the ball and from another swift break down Stockton’s left saw the ball delivered in behind the defensive line where a Stockton defender in trying to clear could only steer the ball into his own net on 49 minutes. Worse was to follow only 6 minutes later when another swift counterattack from Redcar saw Preston released through the middle and he clinically finished the chance to put Redcar 2 up.

Stockton now had a fight on their hands to rescue the game and despite having a lot of possession clear cut chances were hard to find as Redcar defended their lead and Stockton’s usual imaginative forward play just wasn’t there. The evening was summed up on 79 minutes when Lewis Wood grabbed Redcar’s third unmarked from a corner.

All in all a very disappointing performance from Stockton Town and a marker for the season has been set down, next up is Whitehaven at home on Saturday 22nd August with a 2 30pm KO. Hope to see you all there to see if we can bounce back from this disappointment.