Stockton went into the game with Tony Johnson missing out through an injury picked up in Wednesdays victory at Wolviston while Alan Cossavella came in for his first game of the season following holidays.

Stockton started the game on the front foot with Kallum Hannah screwing his left foot effort across goal in the early exchanges before Stockton were awarded a free kick on the left hand side of Gateshead’s penalty area. Max Craggs was switched on to situation and he curled a quick free kick onto Gateshead’s right hand post, it rebounded into play for Adam Nicholson to slam home from 8 yards on 7 minutes.

This spurred Gateshead into a response and a fine move down Stockton’s left saw a first time shot straight into Liam Jordan in Stockton’s goal. This proved the point for Stockton to turn on the pressure yet again and Gatesheads keeper kept out efforts from Chris Stockton andSonni Coleman but half time arrived with no further score.

The second half started with a bang as Stockton kicked off,  Max Craggs spotted an opportunity and fired the ball from all of 50 yards into the top of Gateshead’s net leaving the Gateshead players looking around at each other in disbelief.

Stockton were now well on top and next onto the score sheet was Stocko who rounded off a fine team move down the left and opened up by Stav Roberts clever lay off on 70 minutes. 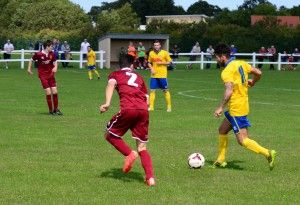 Max Craggs then claimed his second of the match on 75 minutes from the penalty spot after Sonni Coleman was brought down.

Next up on Wednesday evening are Redcar Athletic who have had a fine start to the Season and it is a game that should be a cracker for the spectators. Kick Off is 6 30 pm and it would be good to see a big support for the team.