The shortest away trip of the season saw us visit our nearest rivals Wolviston FC. Stockton made a number of changes with Sonni Coleman starting up front in place of Kallum Hannah and Liam Jordan in goal for Michael Arthur. There was also a place in the squad for Alan Cossavella for the first  time this season due to holidays.

The opening period of the game saw Stockton pressing for an opening goal and Wolviston trying to hit Stockton on the break. The first real chance saw a long diagonal ball into the Wolviston area met by Tony Johnson but he could only scoop the ball over the Woviston bar. After limping back into position Tony Johnson required treatment that saw him have to be replaced by Jimmy Ward. Stockton were looking ever more threatening and had claims for a penalty turned away when the Wolviston keeper appeared to impede Captain Stav Roberts but our appeals were turned away. Stockton were not to be denied for long and a right wing corner saw Sonni Coleman power in a header on 24 minutes for his first of the season.

Eight minute’s later and from another corner Adam Nicholson converted with his head at the back post and four minutes after that the unplayable Chris Stockton found Matty Garbutt bursting into the Wolviston box, round the keeper and coolly finish. Then just two minutes had gone again when Matty Garbutt took advantage of a mix up in the Wolviston defence to once again round the keeper and find the net, 4 goals in 14 minutes. 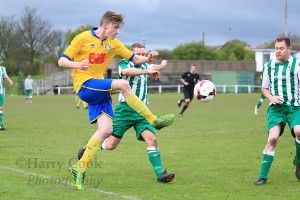 Sonni Coleman opened he scoring for Stockton with a header from a Max Craggs corner.

There was no respite for Wolviston in the second half and 8 minutes ina right wing cross was headed home by Stav Roberts to make it 5 0. Manager Michael Dunwell then introduced Louis Whensley and Joe Scaife Wheatley into centre midfield in place of Chris Dunwell and Stav Roberts and there was no let-up in the quality of Stockton’s play.

Stockton’s 6th came via the penalty spot with Max Craggs sending the keeper the wrong way on 58 minutes and then Matty Lovatt got his first goal at senior level for the Club when he turned home at the back post following a left wing corner.

An impressive display from Stockton who were clinical in front of goal and impressive with the ball. We now have two home league fixtures, with Gateshead Leam Rangers the visitors on Saturday 15th August, kick off 2 30pm and then Redcar Athletic on Wednesday 19th August , kick off 6 30pm.