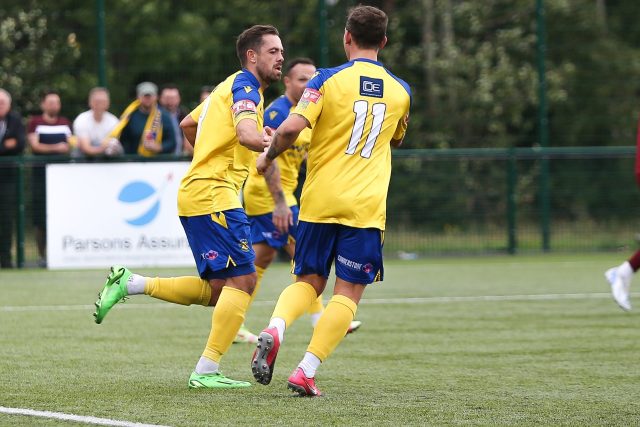 Stockton Town conceded a dramatic late winner as they were knocked out of the Emirates FA Cup by fellow Northern Premier League East side, Pontefract Collieries.

Pontefract opened the scoring through Joe Lumsden before goals from Nathan Mulligan and Adam Nicholson put the Anchors ahead.

The lead did not last long though and the Colls levelled through an own goal from Tom Coulthard.

The visitors stole the game in the final minutes when Adam Priestley converted from close range.

Stockton came into the game following back-to-back wins to start the league season, while Pontefract Collieries had a victory and a draw to start their season. In the FA Cup Extra-Preliminary Round they had beaten Garforth Town to reach this stage.

The Anchors had the game’s first chance when Elliott Beddow, using his speed, got onto the end of a long ball from Lewis McDonald and struck narrowly wide past the goalkeeper.

Shortly before half hour mark, Pontefract took the lead when Lumsden profited from a mix-up between McDonald and Dan McWilliams by nipping in to score.

McWilliams suffered injury during the collision with his goalkeeper and was forced off. Just before halftime Stockton levelled when Kevin Hayes’s cross was met by the head of N.Mulligan for his third goal in as many games.

Early in the second half, the Anchors took the lead when Mulligan turned provider with a free-kick, which was met by Captain Nicholson for his first goal of the season.

The home side were unable to kick on from that and Pontefract tied the game when a free-kick from the left was unfortunately met by Coulthard who turned the ball into his own net.

Stockton had two good chances to restore their lead. First Stephen Thompson forced an excellent save from Lloyd Allinson with a volley at the near post.

Then Hayes struck the crossbar with a curled effort which rebounded to Coulthard who drew another save from Allinson.

Pontefract went close when Gavin Allott was played through but he sent his lofted effort over the bar.

Stockton continued to knock on the door for a decisive third. Thompson drove forward with purpose before sending in a cross which was met by a stooping header by N.Mulligan but Allinson was again in the way.

Thompson continued his involvement and was played through on the right but fired an effort into the side netting.

In the final minutes, Pontefract struck the sucker punch when they cleared a promising Stockton attack forward into an odd-man rush which was tucked away by Priestley.

Stockton return to league action through the week when they play host to North East rivals Hebburn Town on Wednesday evening.