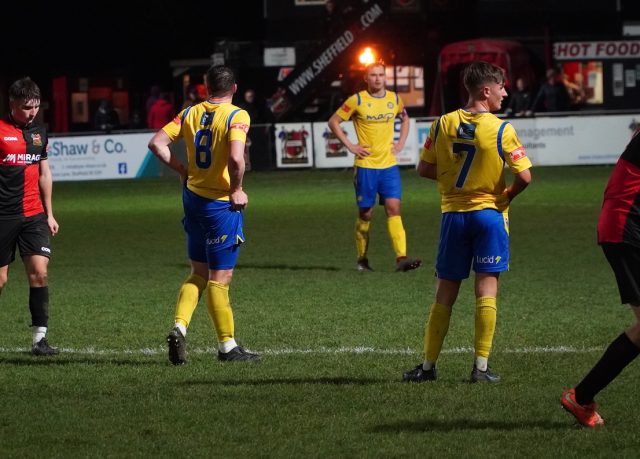 Stockton Town were held to a goalless draw against Sheffield FC on a frustrating evening at the Home of Football Stadium.

In a game where the Anchors were on the front foot for the majority, they were frustrated by their opponents.

The Anchors aren’t in action this weekend and are back at home a week on Saturday when they play host to Tadcaster Albion.

Michael Dunwell named three changes to the side which drew with Yorkshire Amateur on Saturday, with Sam Conway making his full senior debut in Dronfield.

The first 20 minutes were somewhat of a drab affair, with just two efforts on goal inside the first quarter of the match.

Stockton had the first good chance of the game, Peter Bulmer raced onto a through ball from Dan McWilliams on the left hand side and forced a good save from Jonathan Hedge.

The Anchors forced a spell of pressure as Jamie Owens first headed into the palms of Hedge then went for the spectacular overhead kick which went wide.

Owens then tested Hedge again as he glanced past a Sheffield defender inside the box with a Cruyff turn and stung the palms of the home ‘keeper.

Jamie Robinson and Tiernan O’Connor had efforts for the home side, the former heading wide with O’Connor forcing a save from Callum Roberts.

Marc Newsham half-volleyed at goal early in the second-half which Callum Roberts was equal to.

Sheffield then rattled the crossbar when awarded a questionable free kick, with Luke Hall stepping up and curling round the wall and onto the woodwork.

Substitute Jordan Walshaw almost made an immediate impact, making room for a shot which tested Roberts.

The Anchors pushed for a winner in the final twenty minutes as Sheffield looked content to hold on for a point, Mikey Roberts shooting narrowly wide on the volley and Adam Nicholson being denied by an incredible reflex save from Hedge on the goalline.

Mikey Roberts was again involved as he hit a fizzing shot which went inches wide then Nicholson was once again denied by a good save from Hedge.

The Anchors had two big changes to win it in injury time, Nicholson powering a header narrowly over the bar and N. Mulligan fizzing a free kick towards the back post which just evaded everyone.