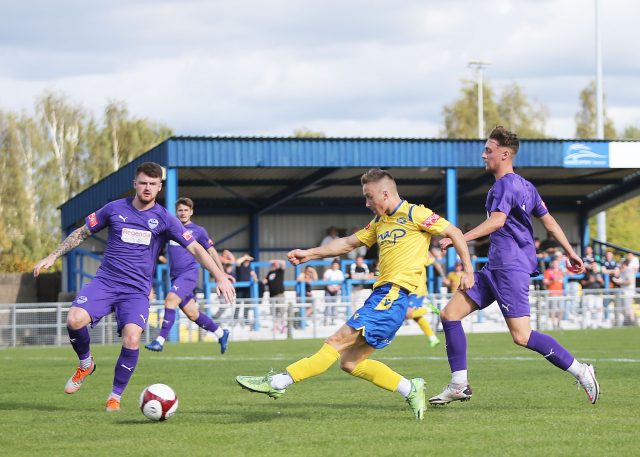 Stockton Town were knocked out of the FA Trophy after losing 4-3 on penalties against City of Liverpool FC.

After a goalless 90 minutes, where chances were few and far between, the game went to a penalty shoot-out.

Tom Coulthard had his penalty saved by Theo Roberts, and Callum Roberts come up with a huge save to deny Louie Corrigan with the Purps’ fifth penalty.

Peter Bulmer was denied by a good save with Stockton’s last spot-kick, and the Anchors will look to put the defeat behind them as they play host to Frickley Athletic in the league next weekend.

Manager Michael Dunwell made two changes to the side that lost to Curzon Ashton in the FA Cup, with Adam Nicholson and Tom Portas coming into the side for Dale Mulligan and Jordan Robinson.

The opening stages of the game were closely contested, with both sides finding their way in the game. After the hosts were forced into an early substitution, the Anchors had their first chance.

Shane Henry found the feet of Jamie Owens, and the striker turned and released Kev Hayes down the left. The winger charged into the penalty area and had an effort saved by Theo Roberts.

The two sides continued to battle in the midfield, in which chances were few and far between. Owens went close with a snapshot in the 33rd minute, while C.Roberts held onto Ben Rydel’s tame effort.

Stockton come out for the second-half with a spring in their step, looking to get on top from the first whistle and the first five minutes, they went close and looked threatening going forward.

Tom Portas played an exquisite pass with the outside of his boot from the centre circle into the hosts’ penalty area, which was headed towards goal by Hayes and caught by Roberts.

In the 52nd minute, the Purps looked to pose a threat on the Stockton goal. Nathan Burke picked the ball up 25-yards from goal, and after being allowed time for the shot, he fired high and wide.

Both sides continued to cancel one another out, and it wasn’t until the final 10 minutes, where the game picked up, with the two sides looking to snatch a late winner.

Ryan Schofield and Hayes fired off target and the hosts could’ve snatched the win in the 89th minute. Xenon Bahula beat the offside trap, but lobbed an effort over the bar under pressure.

After Burke stepped up and scored the first penalty of the shoot-out, Coulthard struck to the bottom left of the goal, but T.Roberts made a good low save to deny the defender.

Nathan Steel, Tom Portas and Dan McWilliams held their nerve for the Anchors, and C.Roberts made a huge save to deny Corrigan and keep the shoot-out alive.

The linesman on the touchline deemed Roberts to have come off his line, and the penalty was retaken. Nevertheless, the Stockton shot-stopper came out on top again, denying Corrigan to his bottom left.

Bulmer had the deciding penalty and T.Roberts made a stop to win the game for the hosts.