Stockton Town completed their home fixtures unbeaten this season, with this 6-0 win over our near neighbours Wolviston FC.

Wolviston carried an early threat  and after an early scare when Michael Arthur had to save from Ben Bonner the same player then fired wide following some sloppy defensive play from Stockton.

This spurred Stockton into action and they went on to dominate the rest of the game.  After 31 minutes Matthew Garbutt found Alan Cossavella whose run from midfield went unnoticed by the Wolviston defence and he made no mistake when firing past Wolviston keeper Jonathan McLone to put Stockton 1 up. 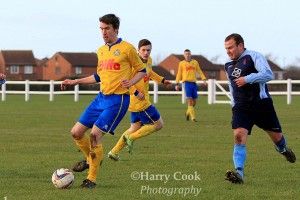 Alan Cossavella rounded off a superb team goal when opening the scoring against Wolviston FC.

Stockton should have increased their lead after 44 minutes, when Max Craggs was brought down inside the area, but Garbutt’s spot kick was saved by McLone down to his right hand side.

Stockton were well on top now and the second goal did come before the interval when Sonni Coleman won the ball on the edge of the area and took the ball around the keeper before firing into the empty net and send Stockton in 2 goals up at half time.

Sonni Coleman almost got his second goal and Stockton’s third after 46 minutes but his shot hit the post. However Stockton would not have to wait long to increase their lead, this time Matty Garbutt made amends for his penalty miss when he made if 3-0 after 50 minutes.

McLone pulled off the save of the game when he tipped Stephen Roberts shot over the bar in the 69th minutes.

Stockton Town  finished the strongest with 3 goals in 6 minutes. McLone was helpless as Garbutt made it 4-0 after 86 minutes, it was soon 5-0 when James Ward scored after 88 minutes, then in the second minute of injury time Max Craggs rounded off a fine team performance.