Stockton Towns last home draw was exactly one year ago, as we drew 1-1 with Seaton Carew on the 26th April 2014

One year later another home draw this time with Boldon CA.

How the first half finished goal less nobody knows, Kallum Hannah with only the keeper to beat slipped when he was about to shoot.

But in a hectic finish to the half Max Craggs hit the post and the Boldon defence scambled the ball out for a corner, Craggs took the corner and Adam Nicholson’s shot hit the crossbar and bounced clear.

Right on the half time whistle Ben Priestley fired a fierce shot from the edge of the box, the Boldon keeper Andrew Hunter managed to tip the ball over the bar.

Boldon who never troubled Michael Arthur and  he had not had a shot to save, found themselves 2-0 up.

The first came from a cross from Barney Dobinson after 49 minutes, that hesitation in the Stockton defence allowed Liam Wooton to get a boot to the ball and deflect it into the net.

It was 2-0 after 53 minutes Boldon won a free kick 30 yards from goal, Carl Evens free kick hit the wall the ball going the opposite side to Michael Arthur.

Despite having most of the play Stockton found the Boldon defence a hard nut to crack.

But crack it did after 72 minutes a fine solo goal from Adam Nicholson he won the ball just inside the Boldon half of the field, he jinxed his way through the defence before firing past Hunter.

Nicholson made the score all square after 82 minutes as he headed in at the far post to set up a grandstand finish. 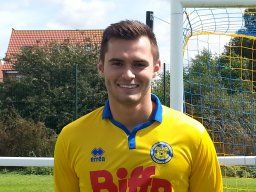 Chances fell to Hannah who fired across the face of goal and just wide of the post, Michael Dunwell who forced Hunter to make a fine save, Nicholson who almost completed his hat trick but for the second time in this game hit the post.

Hunter pulled off the save of the game in injury time, Matthew Garbutt firing in  a low shot that was going in near to the foot of the post, before Hunter got a hand to the ball to send it high and over, that could have gone into the roof of the net, but this time it went over the bar.

Stockton lost their 100% home record with this draw, but are still unbeaten by any Wearside League side this season.