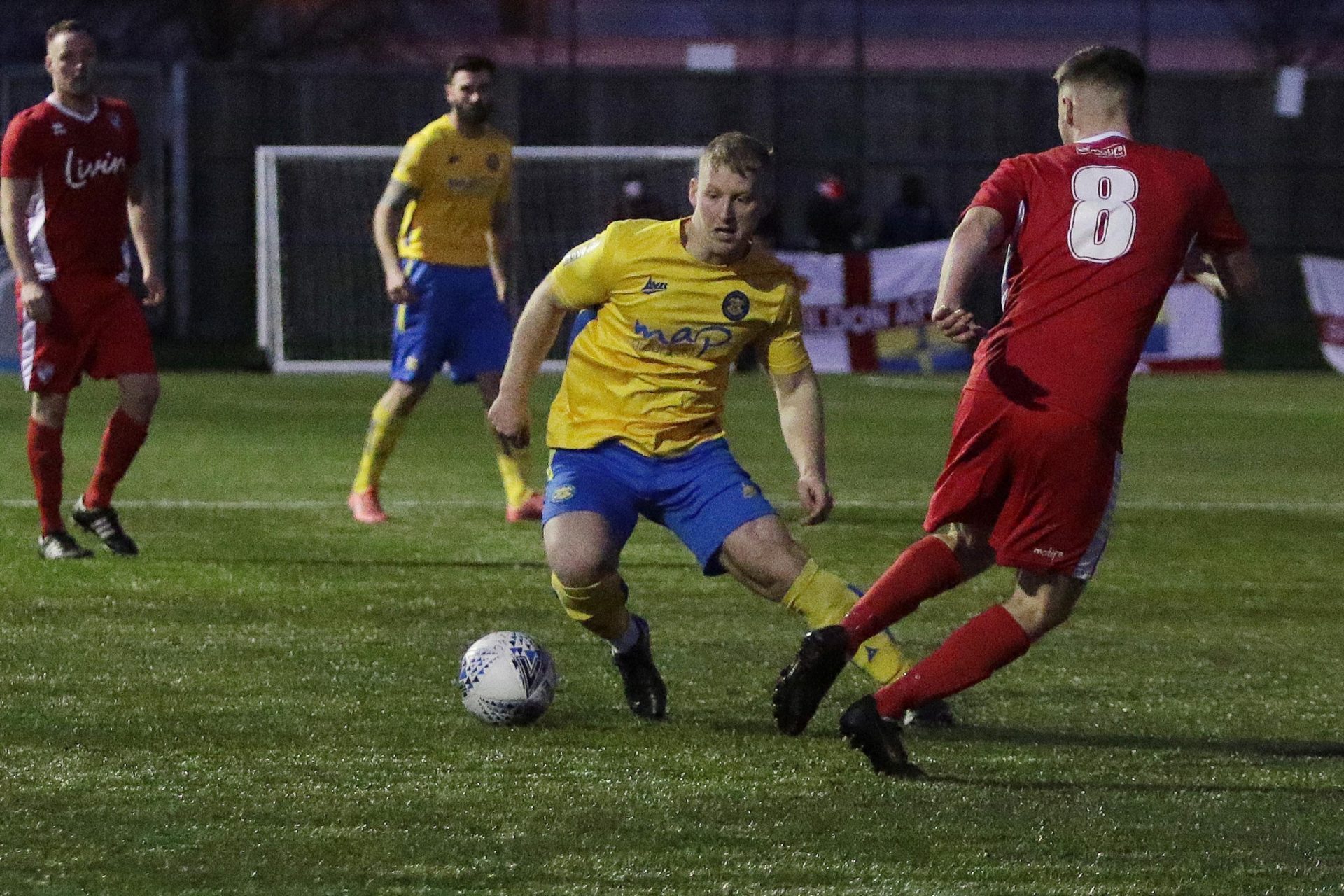 Stockton Town’s hopes for a dream return to Wembley are over for this campaign after a 3-1 defeat to Shildon in the FA Vase Third Round.

There were early warning signs for the Anchors when Thexton broke the offside trap inside five minutes but Tom Coulthard recovered for block the striker’s effort.

The Anchors had a chance of their own after ten minutes through a lightning counter-attack from a Shildon corner, Kev Hayes’ curling effort was tipped over the bar by Shaun Newbrook.

Shildon did take the lead just a few minutes later, Thexton found space on the left of the penalty area and curled an effort beyond Ross Coombe, who was deputising for the suspended Callum Roberts.

Tensions threatened to flare up after Chay Liddle’s late challenge on Tom Portas, with the Shildon no. 6 given a yellow card and Portas a talking to.

A long ball over the top played in Thexton but Coombe dived brilliantly to his right hand side to keep out the Shildon man’s volley.

The Railwaymen doubled their lead on the stroke of half-time, Matthews broke the offside trap and slotted past Coombe to leave the Anchors with work to do in the second half.

Michael Dunwell responded with an attacking change at the break, Lewis King was substituted with an ankle knock and Nathan Steel, making his first appearance for over twelve months, replaced him.

Stockton set about getting themselves back into the match and were rewarded with a succession of corners, with Portas firing over from outside the box on the rebound.

Thexton almost scored a third for Shildon but his well struck effort from a narrow angle went over the bar.

The Anchors kept pushing for a route back into the contest, Shane Henry’s header across goal from a free kick was pushed away by Newbrook and Robinson’s shot in a crowd of defenders was claimed by the Shildon no. 1.

With less than twenty minutes to go, Nathan Mulligan gave Stockton hope of taking the tie to penalties, he found room in the box to get a shot away and find the corner.

This prompted the crowd into full voice and suddenly the home side believed the game was there to be rescued.

Coombe stood strong at the other end to deny Michael Sweet the crucial third goal for Shildon with a big save.

Shildon defended resolutely and scored their third goal, Thexton doubled his tally for the match by meeting a cross from Sweet.

It wasn’t to be for the Anchors today, full focus now goes to the Northern League, whenever that may resume.