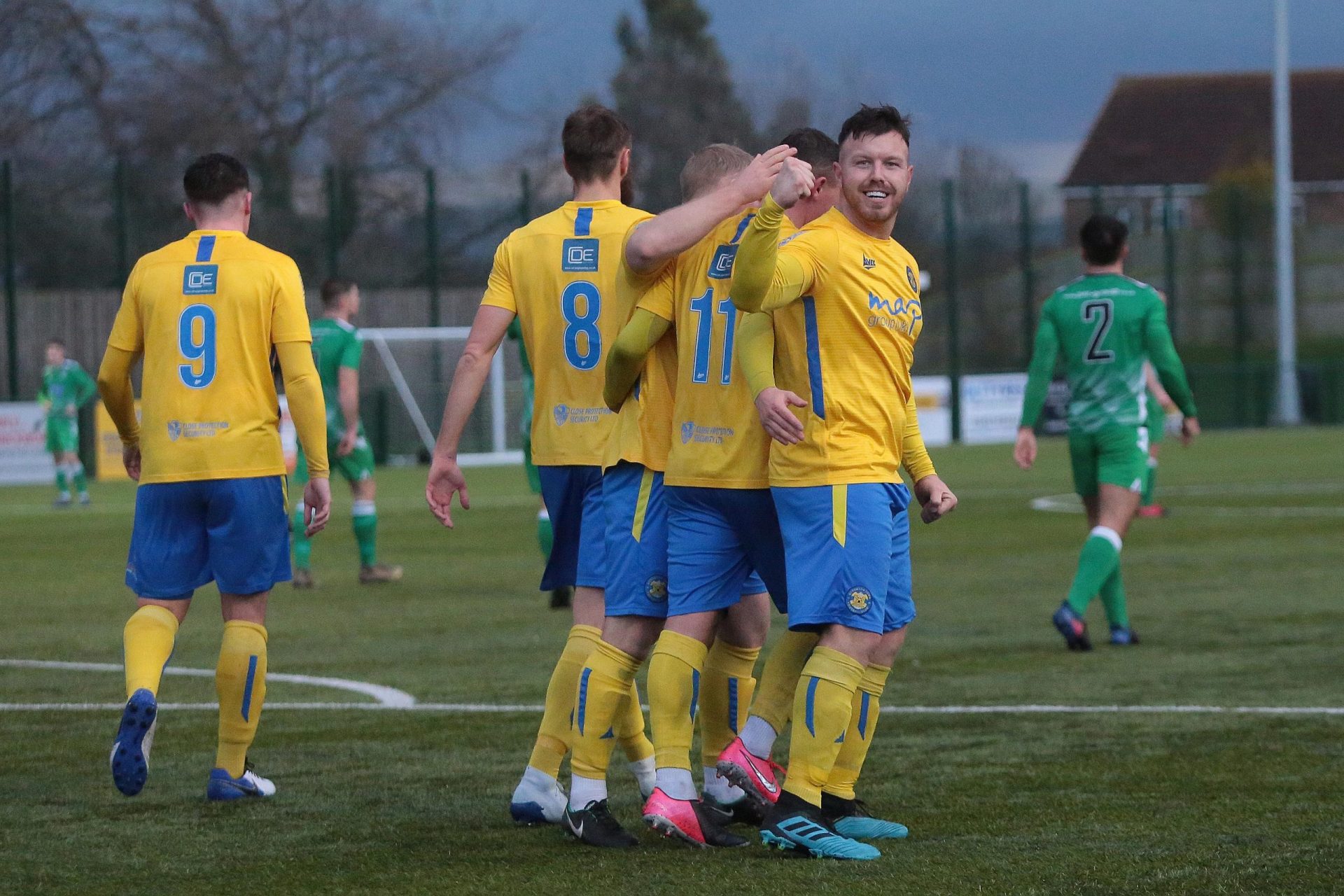 Stockton Town progressed to the FA Vase Third Round after an entertaining 4-2 victory over Charnock Richard.

The Anchors looked to be cruising into the Third Round after scoring three times in the opening half hour, Dan McWilliams, Jamie Owens and Mikey Roberts all on target.

Charnock were offered a lifeline after Brad Carsley’s powerful header found the back of the net and Callum Roberts was sent off in the aftermath for his reaction against Carl Grimshaw.

Skipper Adam Nicholson headed in the hosts fourth goal to move ever closer to a century of goals for the club.

Lewis Pilgrim pulled another goal back for the visitors with a well taken volley, but it wasn’t enough as Stockton emerged from a six goal thriller with a place in the next round.

Charnock flew out of the blocks, Nickens had the first shot on goal after three minutes that was saved at the near post by Callum Roberts.

Kev Hayes managed the first shot on goal for Stockton, curling an effort on his left foot over the crossbar.

The Anchors took the lead through Dan McWilliams after excellent pressure from the left back resulted in him winning the ball, driving forward and curling an effort with his right foot into the far corner.

The goal appeared to settle the home side, who then began to create opportunities, Hayes’ deep corner found Henry at the back post but the midfielder couldn’t quite direct an effort on goal.

Hayes and Henry combined again with a neat 1-2 inside the Charnock penalty area, attempting to set up Mikey Roberts but the ball was cleared before the latter could score.

Jamie Owens doubled the hosts lead with a typically emphatic finish into the far corner with his trusted left foot.

Stockton continued to press on, Robinson recovered the ball in midfield before finding Hayes, his left footed effort was just wide.

Shane Henry was played through by Mikey Roberts and the midfielder’s well taken effort was saved from close range by David Jones.

Mikey Roberts continued his excellent goal scoring record this campaign with a thunderous strike into the top corner, his ninth goal of the season.

Charnock found a way back into the match through Brad Carsley’s header, Callum Roberts was sent off for an off the ball incident in the aftermath of the goal, Mikey Roberts replaced his namesake between the posts for the final 45 minutes.

Charnock began to dominate the ball in the early stages of the second half, searching for a way through some resolute Anchors defending.

Dan McWilliams broke from a visiting corner, his early cross was just out of reach of the onrushing Kev Hayes.

The visitors could have halved the deficit just after the hour mark but Carsley’s pull back was over the head of Nickens and was cleared.

Kev Hayes tested Jones with a free kick from 30 yards, the ‘keeper tipping his set piece round the post.

From the resulting corner, Adam Nicholson rose highest from Hayes’ delivery to score the Anchors fourth and seal their passage into the Third Round.

Minutes later, Nicholson believed he had doubled his tally for the match, his shot from close range appeared to have crossed the line, but nothing was given from either the referee or assistant.

Mikey Roberts pulled off his only real save in goal with a good stop at his near post from Nickens’ shot.

Charnock offered brief concern of a comeback through Pilgrim’s half volley from the edge of the penalty box, but the Anchors prevailed from a competitive FA Vase tie.

The draw for the Third Round takes place on Monday 7th December at 1pm.