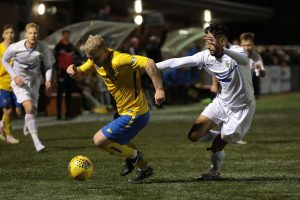 Stockton Town exited the FA Cup at the First Qualifying Round with a 1-0 defeat to Consett.

Luke Carr’s strike on the hour mark was enough for the County Durham side to progress into Friday’s draw.

Stockton had beaten Shildon and Billingham Town to progress to this stage, whilst Consett emerged victorious over Ryhope and Ossett United.

The game started tight, with both sides enjoying spells of possession in a competitive opening 15 minutes.

Consett began to create a few chances and were close to going ahead through Dale Pearson, the striker hitting the post from inside the area.

The Anchors had a chance to take the lead themselves when Kevin Hayes found space but could only shoot wide.

The game opened up towards the half time interval, with both sides creating opportunities.

Just before the break, a well structured counter attack from the Anchors presented Hayes with a chance that was saved by his namesake in the Consett goal.

The visitors started the second period the brighter of the two sides, and could have taken the lead when a shot from Portas took a deflection that required a good save from the Consett ‘keeper.

Consett took the lead on the hour mark when Darren Holden laid off Carr for a calm finish into the bottom corner.

Stockton began to push for an equaliser, and created two good opportunities. First, Henry had an effort saved by the feet of Hayes, then Mikey Roberts had a shot cleared off the line from King’s cross.

Consett had the ball in the net through substitute Cornish but the linesman’s flag was raised.

As the minutes ticked down, the Anchors couldn’t manage to find the equalising goal to bring a penalty shoot-out.

Up next for the Anchors is a league fixture at home to Northallerton Town.