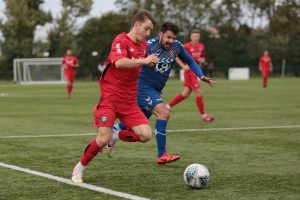 Stockton Town progressed to the First Qualifying Round of the FA Cup after a dramatic injury time winner from Kevin Hayes.

The Teesside derby looked to be destined for a penalty shoot-out after Nathan Mulligan had cancelled out Chris Emms first half spot kick.

The Anchors pushed forward for a winner and looked set to be frustrated until Kevin Hayes worked room in a crowded penalty area to slide the ball home.

The game started lively and Billingham had the first effort on goal but Callum Roberts stood tall to deny Earl.

Stockton began to create chances and were close to going ahead twice, first Mikey Roberts had a one-on-one saved then Nicholson went close to connecting to a McWilliams delivery.

Billingham Town were presented with a chance to take the lead after a dubious foul was called on Tom Coulthard.

Emms stepped up and slotted the 'hosts' into the lead.

The Anchors retaliated immediately from kick off, Nathan Mulligan caused the defence problems and managed to lob the goalkeeper from six yards.

The Anchors continued to create, but no clear cut chances were found for the majority.

With 15 minutes to go, Billingham were awarded a second spot kick after consultation between the referee and the linesman, despite originally awarding a free kick on the edge of the area.

Callum Roberts stepped up with a huge save to deny Emms' penalty and keep the Anchors on level terms.

The game opened up in the final 10 minutes as Stockton went searching for a winner, creating chance after chance but agonisingly falling short of finding the winning goal.

That was until Kevin Hayes took the ball, created space for himself in the penalty area to slide the ball home and send the Anchors through to the FA Cup First Qualifying Round, cueing the somersaults.