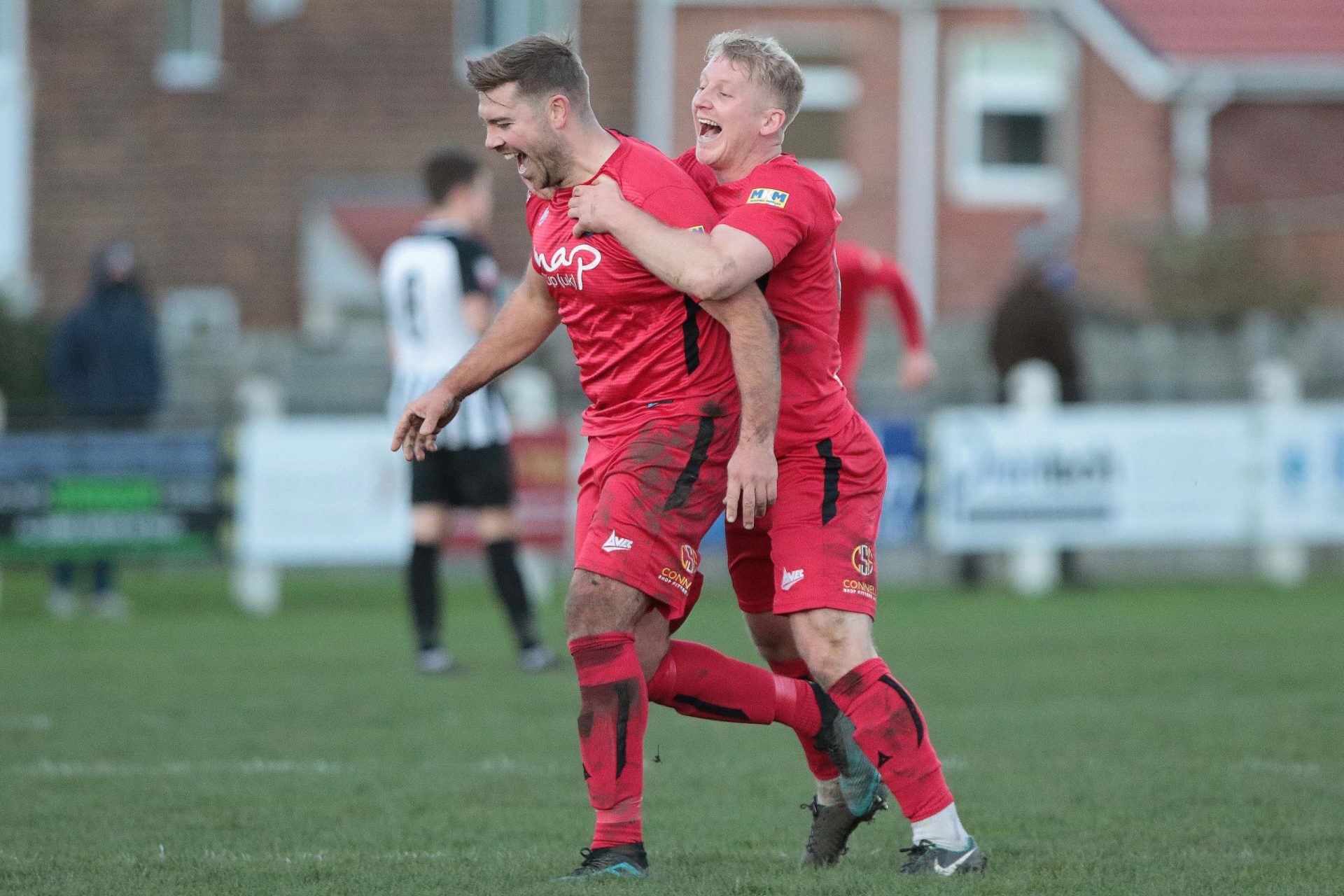 Dale Mulligan scored from inside his own half as Stockton Town ended an unbeaten October with a 5-0 victory at Whickham.

Mikey Roberts opened the scoring on his 100th appearance for the Anchors, slotting in at the back post for his 8th goal of the campaign.

The Anchors added four goals in a terrific second half display; Nathan Mulligan, Tom Coulthard, Dale Mulligan and Lewis King all on target as Stockton end October with four wins from five matches.

Whickham had the first opportunity of the match when Zac Atkinson’s half volley sailed over the crossbar.

The Anchors took the lead following their first attack on goal, Lewis King and Kev Hayes exchanged passes on the right flank before finding Nathan Mulligan, who pulled back for Mikey Roberts to score his third goal in two matches.

Whickham responded well and it took an incredible Dan McWilliams block for the visitors to remain level, a goal mouth scramble ensued from a set piece and McWilliams’ threw himself into the path of the ball to deny Atkinson the equaliser.

Callum Roberts made a fine save from Robson that was palmed away from the onrushing Bowey, the Anchors then cleared the danger.

The visitors rode out the pressure from Whickham and began to create several chances, Nathan Mulligan found Hayes with an outside-the-foot through ball, the winger cut inside but his shot was saved by Regan Ward.

Hayes found space in the Whickham half to get a shot away, his effort was saved well by Ward.

The Anchors almost doubled their lead, McWilliams with a deep cross that was headed back across goal by Nathan Mulligan, Craggs lost his footing as he was about to strike and Mikey Roberts’ effort was saved.

Whickham missed a huge chance to restore parity just before half-time, Atkinson forced a good save from Callum Roberts, Bowey’s follow up from close range hit the crossbar and the Anchors were able to clear.

Tom Portas, who was excellent once again in midfield, recovered the ball in the centre of the pitch, found King who’s cross to Owens was fired over by the striker.

Nathan Mulligan doubled the visitors lead shortly after half-time, good possession play around the Whickham penalty area freed King on the right flank, his cross to found Owens who’s shot was blocked before Nathan Mulligan followed up for his 7th goal of the campaign.

Portas was in action again as he made a brilliant tackle to deny Atkinson a one-on-one opportunity.

The Anchors were in control of the game and were creating more chances, Craggs, Hayes and Owens all having shots on goal.

Jamie Owens was unlucky not score when his shot from King’s cross was saved at point blank range from Ward.

Nathan Mulligan almost grabbed his second goal of the match, latching onto a poor back pass but couldn’t quite round the keeper in order to get a shot away.

The Anchors sealed the three points with a third goal midway through the second half, Mikey Roberts’ deep corner was sent back across goal by Dale Mulligan, Coulthard slid in at the near post to score his second goal of the season, and first since the opening day.

The pick of the goals, and arguably the winner of the goal of the season already, came from the boot of Dale Mulligan; the centre-back spotted Ward off his line from a free-kick, and cleverly took it quickly to lob the fastly retreating goalkeeper from his own half.

Callum Roberts preserved a deserved clean sheet with a stunning point blank save from Newton.

Lewis King capped off another top personal performance with the fifth goal of the game, the right-back controlled the ball well and smashed home at the near post to round off another comprehensive performance from the Anchors.

Next up is a trip to Ryhope CW on Tuesday 3rd November.