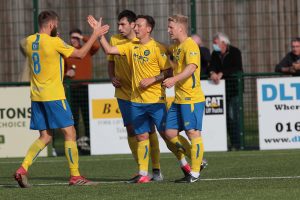 A 94th minute penalty for West Auckland cancelled out Mikey Roberts’ opening strike to salvage a point for the visitors.

The Anchors looked set for their second league win of the season when deep into injury time West were awarded a spot kick.

Callum Patton stepped up to level the scores to leave the hosts wondering how they haven’t won.

Mikey Roberts had given the Anchors a deserved lead after a well worked move allowed him space in the box to turn and fire Stockton in front.

West had the first chance of the match, Anthony Bell broke through the Stockton defence but his effort was well saved by Callum Roberts on his 50th appearance for the Anchors.

The hosts gained control of proceedings, first Hayes headed over from Franks’ cross then the winger cut inside from the right to get a shot away that was blocked.

Shane Henry, who was excellent throughout, struck the woodwork with a header across goal from Hayes’ corner.

Stockton continued to press, Owens was found by Henry but his strike was over the crossbar, then the striker was unlucky not to score after he rounded the West ‘keeper but couldn’t quite find the finishing touch.

Henry was so unlucky not to put the Anchors ahead with a fierce strike that shook the crossbar and bounced away.

The second half started slowly but the Anchors picked up the tempo and created three good chances in succession; first, Nicholson hit the crossbar with a header from Hayes’ free kick.

McWilliams found space on the left flank to feed Mikey Roberts who’s turn and shot was straight at the keeper, King whipped in a cross onto Roberts’ head but his flashing header was just wide.

Stockton deservedly broke the deadlock just under 20 minutes from time, quick passing and movement allowed Mikey Roberts time and space to turn and slot the ball into the corner.

Henry had an effort from 20 yards that was saved only into the path of Mikey Roberts who couldn’t quite get the finishing touch.

With less than ten minutes to go, West were awarded a penalty kick, under consultation between the referee and the linesman, the decision was altered to a free kick on the edge of the area, that was blocked by the wall.

The Anchors had another chance on the break, Risbrough and Hayes exchanged passes but Hayes’ shot was saved by the West ‘keeper.

Deep into injury time, West Auckland were awarded a spot kick for an alleged foul on Patton, who stepped up to level the game and leave the Anchors frustrated.