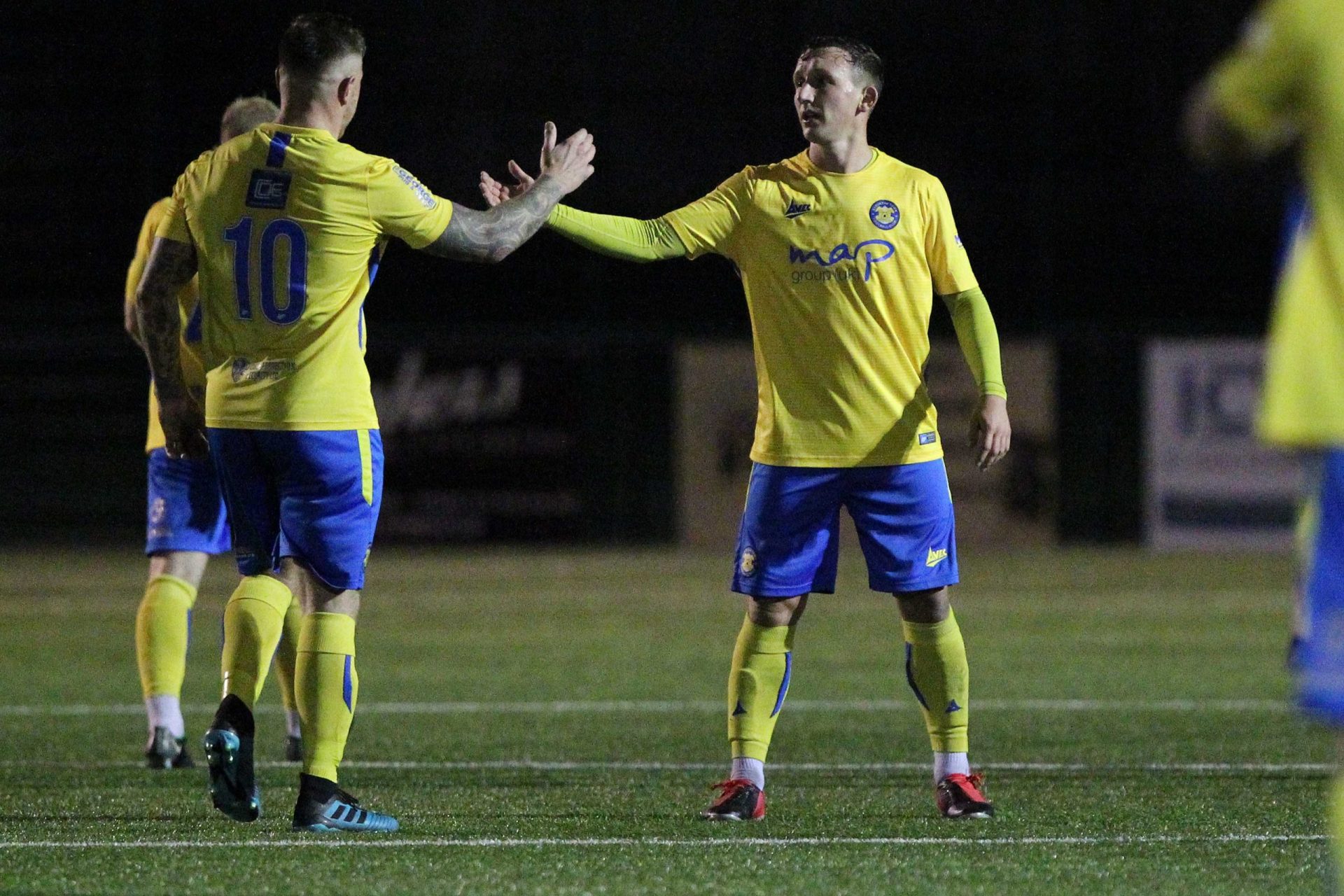 Stockton Town recorded their biggest win for just over twelve months with a dismantling 7-1 victory over Seaham Red Star.

The Anchors scored five times in a breathtaking first half in which they attacked at will with pace and intensity that the visitors couldn’t live with.

Nathan Mulligan added a sixth for the hosts before Mikey Roberts rounded off a comprehensive performance with his second of the night, and the Anchors seventh.

It is the first time since Bishop Auckland in the Durham Challenge Cup last October that Stockton have scored seven times in one game, and the first time in the Northern League since beating Penrith 8-0 in 2018.

Both sides enjoyed spells of possession in a closely contested opening 15 minutes, without carving out many clear cut chances.

The Anchors broke the deadlock shortly after the 15 minute mark, Dan McWilliams found space on the left flank to pull back to Jordan Robinson, his effort was deflected past the unfortunate Seaham no.1.

Tom Coulthard was close to doubling the hosts’ advantage but his effort was well blocked on the goal line.

Stockton did double their lead when Kevin Hayes’ corner was deflected into the path of Dale Mulligan who slotted in at the back post.

The Anchors began to hit their stride and were playing some confident football, McWilliams found space on the left, passed inside to Owens who played in Henry but his one-on-one effort was well saved by the Seaham ‘keeper.

Tom Portas grabbed his first goal of the season before the half hour mark, working some space in the box before slotting home into the bottom corner.

Stockton kept searching for goals and went close on numerous occasions. First, McWilliams’ wicked cross was just out of reach of the onrushing Owens. Kev Hayes, Mikey Roberts and Owens linked you nicely before setting up Robinson who fired over from close range.

Callum Roberts set up a counter attack with a long goal kick to Lewis King, his cross found Hayes who curled his effort just over the bar on his right foot.

Arguably the pick of the goals came from the boot of Mikey Roberts who broke forward on the counter attack a to cut inside and unleash a strike into the top corner.

Shane Henry scored his second goal in three games as he headed in at the back post from Hayes’ corner with virtually the last act of the first half.

Hayes dispossessed two Seaham defenders before curling a shot that went just over the bar.

Nathan Mulligan was denied a sixth goal by a stunning close range save from the Seaham keeper.

Peter Bulmer entered the field with twenty minutes to play and almost scored on his second Stockton Town debut, working his way through the Seaham defence, rounding the keeper but couldn’t get his shot away. From the rebound, Nathan Mulligan slotted home the sixth goal of the night.

Seaham grabbed a consolation goal through Elcoate after Stockton had failed to clear their lines.

Max Craggs’ free kick was palmed into the path of Nathan Mulligan but his follow-up effort was well saved by the Seaham no. 1.

Mikey Roberts secured his brace with the final kick of the match, controlling the ball and slotting home to complete a magnificent attacking performance from the Anchors.

Up next for Stockton is a trip to Whickham FC on Saturday 31st October.