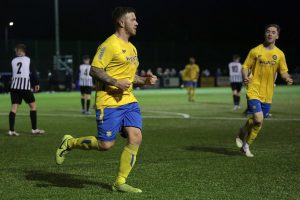 Stockton Town secured the first three points of their league campaign with a hard-fought win over a competitive Ashington side.

Jamie Owens’ opened the scoring with his first goal of the season, slotting in two minutes before half-time.

Nathan Mulligan added late gloss to the scoreline with a late brace, first from the penalty spot after Jonathan Franks was fouled on the goal line. His second came from a counter-attack as Ashington pushed for a goal, tapping at the back post from Franks’ cross.

Stockton started on the front foot and could have been ahead inside three minutes, Jamie Owens found room inside the box and his shot hit the side netting.

The Anchors continued to create chances, and almost hit the front when Shane Henry rattled the crossbar with a fierce strike that somehow bounced out.

A succession of chances came for the hosts but no breakthrough was found, until just two minutes before the break when Jamie Owens found room to slot in with his trusty left foot.

Ashington began the second half on the front foot and caused the Anchors a few problems, twice almost equalising when Dean Briggs was denied by a last ditch block by Dan McWilliams, then Callum Roberts had to sweep to prevent a one-on-one opportunity.

Michael Dunwell turned to his bench to steady the game after Lewis King was forced off with a knock, bringing Dale Mulligan on for his first competitive appearance since returning to Stockton.

The Anchors steadied the tide and began to create opportunities themselves, first Franks broke through on goal but fired just wide. Mikey Roberts harried the Ashington back line and won the ball back, but Robinson’s effort was deflected wide from the pull back.

Stockton were given the chance to seal the game with six minutes to go from the spot after Franks was hauled down on the line when he seemed certain to score.

Nathan Mulligan stepped up and slotted in his second goal of the season.

His third followed moments later, Franks found space on right flank, his cross was out of reach of the Ashington ‘keeper, leaving Mulligan to tap in at the back post. 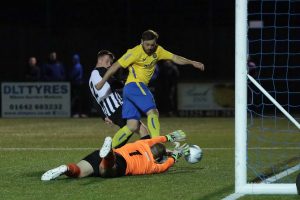 Nathan Mulligan taps in at the back post for his second goal of game, and his third of the season.

The Anchors were tested in parts tonight, and survived a good spell of pressure from the visitors during the second half.

Up next for the Anchors is a trip to Billingham Town in the FA Cup Preliminary Round on Saturday afternoon.