The Anchors bounced back from Saturdays disappointment with a victory tonight over a stubborn Northallerton on a claggy surface. They pretty much dominated possession for the first 70 minutes and with 2 super goals midway though the second half and looked to be cruising until a lack of concentration led to a goal for the home side with their first shot on target and a nervy final period.

Michael Dunwell rested Owens, Bulmer and Mulligan for Roberts, Risbrough and Craggs tonight to freshen it up.

Stockton started brightly, Fred Woodhouse was heavily involved in the early exchanges and had three efforts in the first 20 minutes but each time he was denied by good saves from Dawson. There was only two minutes on the clock when Woodhouse latched onto a loose ball and his shot was saved low down at the foot of the post, his next effort was an even better strike after cutting in from the right and skipping round Pattinson and firing in a left footer from edge of the box which Dawson pushed away for a corner on the stretch. His best chance came when he got on the end of a flick by Hayes and found himself bearing down on goal his curling effort was beaten away by Dawson and Roberts couldn’t get the purchase to convert the rebound. 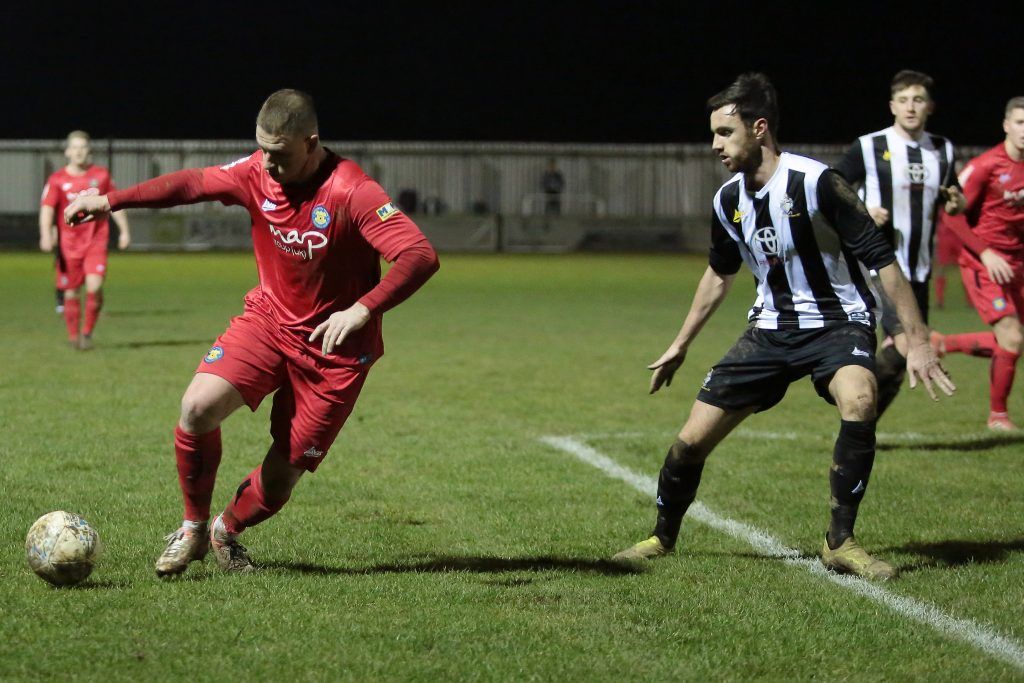 Fred Woodhouse had several great efforts in a super performance

Northallerton broke out a couple of times and Hillerby had a half chance which he fired wide and then after a catalogue of errors allowed the hosts to break King slipped in the mud trying to recover and Nicholson had to take one for the team, bringing down Murphy to avoid a two on one situation.

The Anchors continued to dominate possession but couldn’t force the ball home, Roberts and Hayes both blazed efforts over the bar and Risbrough was robbed by Pattinson just as he was about to shoot after beating the offside trap and the Anchors went into the break frustrated. FT 0-0

Second half followed much the same pattern, Northallerton sat deep defending in numbers and Stockton probed and moved the ball side to side trying to work an opening. It was Max Craggs turn to work the keeper with two superbly struck free kicks, one heading towards the roof of the net the other low down and Dawson was equal to them both with excellent stops.

Finally the anchors got the breakthrough on 58 minutes after yet another corner was scrambled away the loose ball was picked up by Portas who fed it out wide to Woodhouse he stood up a cross and CRAGGS rose to head it home from close range. 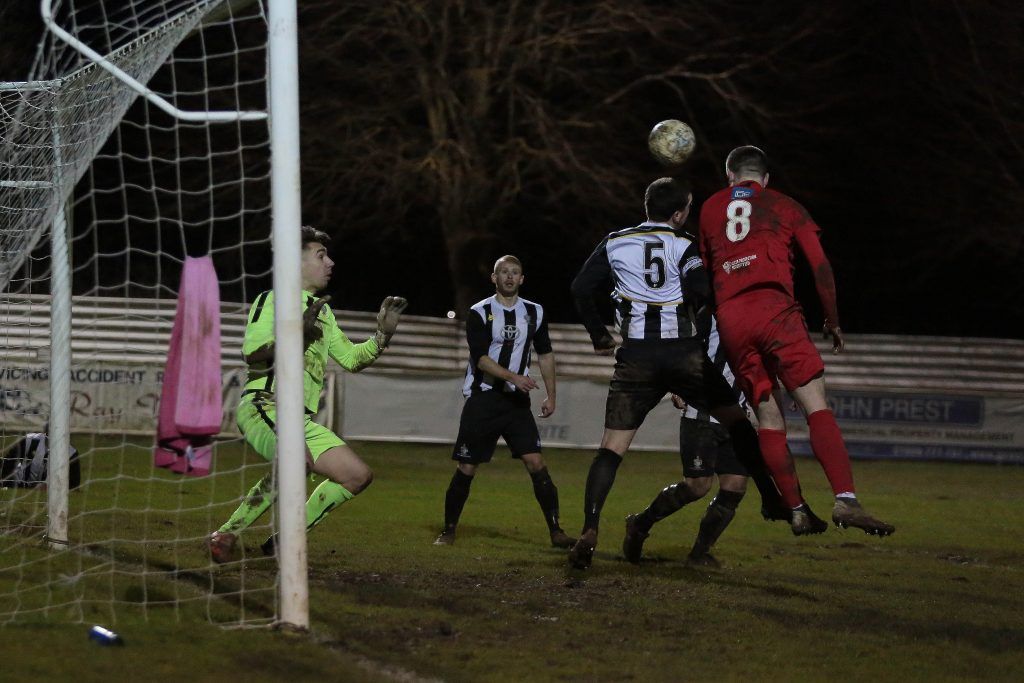 Northallerton responded and all of a sudden pushed the anchors back into their area and only a last ditch tackle by Nicholson prevented Murphy from equalising just two minutes later after being caught short at the back.

Dawson, who was unsurprisingly Northallerton’s man of the match, made another excellent save from Craggs as he turned in the box and in one movement shot from 8 yards out. But the keeper had no chance on 68 minutes when McWilliams inch perfect left foot pass found HAYES running in behind on the left hand side of the box, he controlled it in one touch and lobbed the onrushing Dawson for an excellent finish. 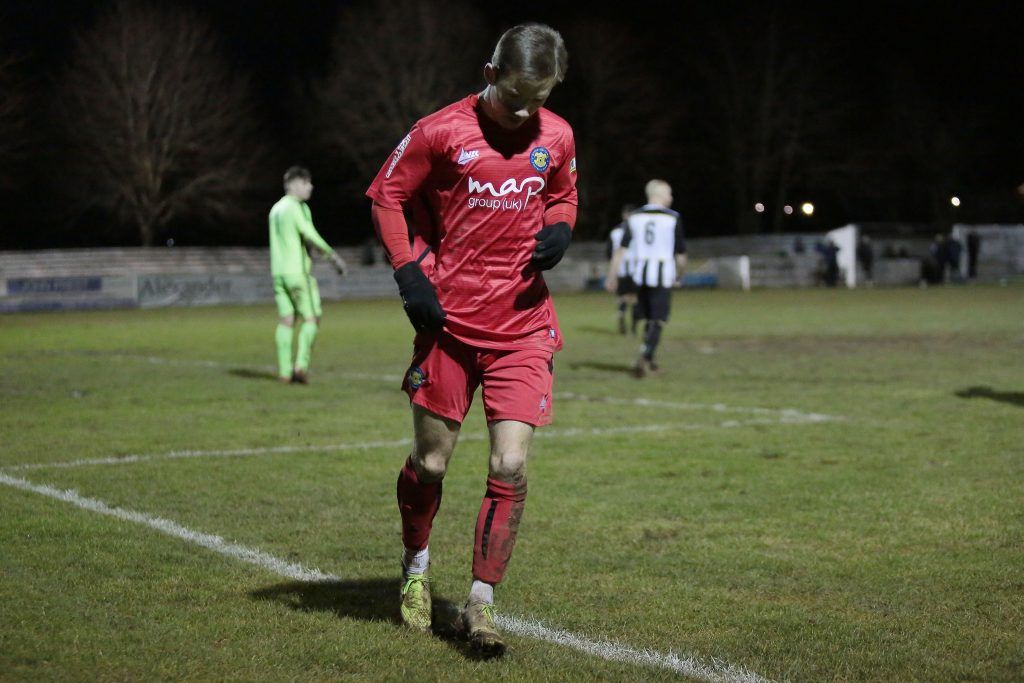 Game over everyone thought, not Northallerton though and just 5 minutes later, full back Charlie GRAHAM exploited the space down the Anchors right and hit a shot across the goal and past Roberts into the far corner.

The Anchors lost their way a little and needed a few minutes to compose themselves. The hosts tried hard and threw men forward but Stockton stood firm and apart from the odd skirmish held on for 3 points FT 1-2

It was important to bounce right back and they did, the game could have been sewn up inside an hour but keeper Dawson had his say in that, two super goals though and the Anchors showed great patience and resilience in trying conditions. Woodhouse and Nicholson were stand outs on the evening, Portas was busy and involved in everything as usual and Max Craggs showed his qualilty and played a huge part especially second half.

On to Bishops this weekend and then a huge week with South Shields in the Cup and promotion rivals Shildon which should be a classic.