A disappointing result and an under par performance for the Anchors saw the end of the unbeaten run and them dumped out of the Vase. Take nothing away from Atherstone they handled the conditions better and their tactics worked out for them as they pretty much contained the Anchors threat, especially in the second half and created 3 or 4 chances one of which they took. Stockton, despite plenty of effort just weren’t able to do enough in response and just as the Anchors looked like they were coming into the game, a late Obi goal put the lid on a frustrating day.

Michael Dunwell restored Hayes, Bulmer and Portas to the starting line up and another big crowd had gathered with plenty of visiting fans making for a good atmosphere. A very strong gusty wind was always going to be a factor and it was, especially first half when the Adders had it at their backs.

Stockton had to defend for their lives in the opening fifteen minutes as Atherstone made good use of the wind and pushed the Anchors back into their box, clearances were holding up and sure touches were at a premium. But they did it well and Roberts saved Naughton’s shot comfortably on 6 minutes, 2 minutes later it was Naughton again latching on to a flick on from a long throw in to strike a shot on the half volley just over the bar. Atherstone kept pressing and drew a free kick just outside the left corner of the box, it was Naughton who struck it well but as it flew past the far post Roberts was there just in case. 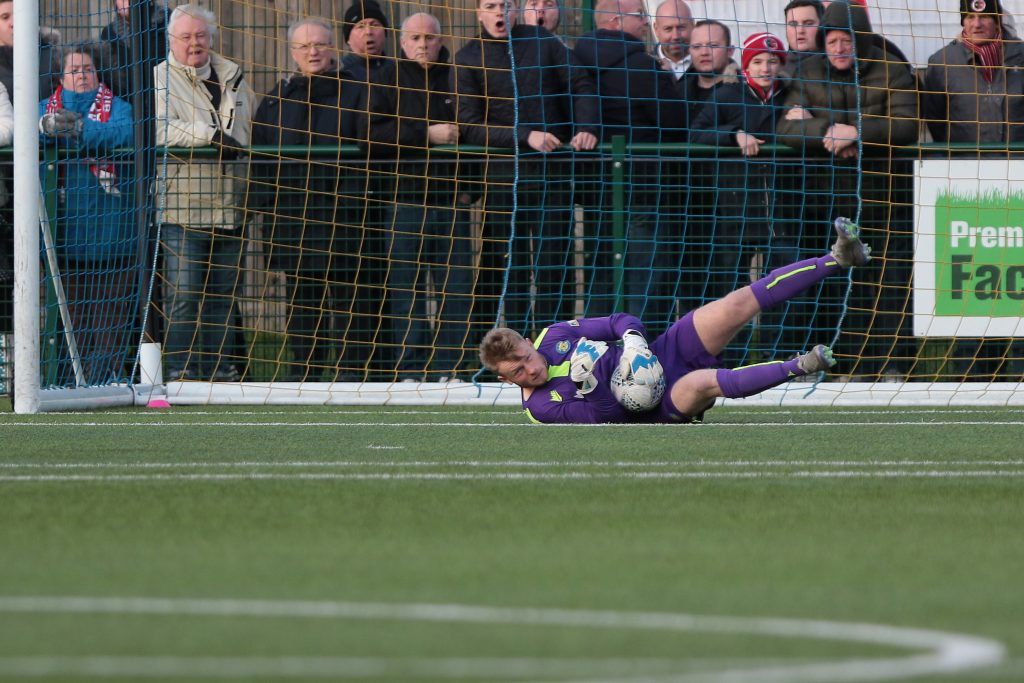 Callum Roberts handling was excellent in the conditions

It was Atherstones turn to defend as Stockton got the ball down and built up some good moves down the right, Lewis King linking with Hayes and sending in two terrific crosses which Owens almost got on the end of.

After the initial surge Stockton now seemed to have it all pretty much under control, they kept Atherstone at arms length and coped with the the wind affected balls into the box, Roberts pulled off one excellent save tipping over Belchers effort from 20 yards, that aside it was the Anchors who had the better opportunities.

Pete Bulmer had two good efforts on goal, controlling a ball inside the box he dropped his shoulder and curled it with his right foot but with O’Neill beaten in the Adders goal it slipped agonisingly inches wide and then on 35 minutes he took a ball from Woodhouse and crashed in a shot from outside the box which took a slight deflection of a defender and flew just wide again. HT 0-0 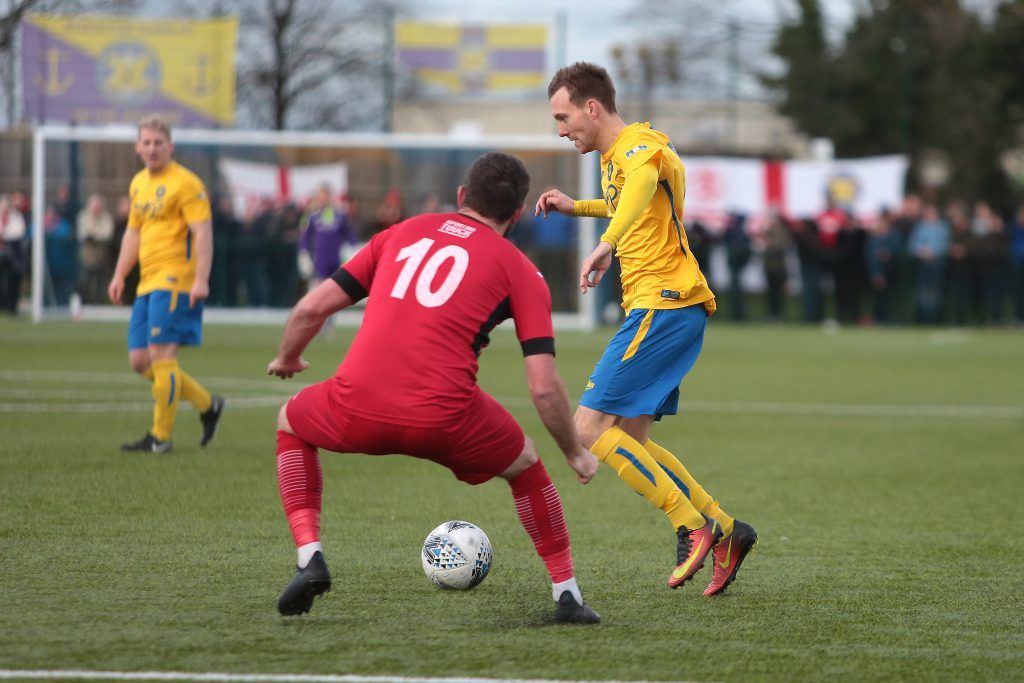 Bulmer went close twice in the first half

Second half didn’t quite pan out as planned, the wind eased which helped the quality of the game but the Anchors just never got up a head of steam and Atherstones blatant delaying tactics and hounding of the referee everytime he blew his whistle certainly had an effect on building momentum in the game.

Obi went close after just a few minutes but he couldn’t get a clean header on Cottons ball into the area and then we went through a spell of free kicks, long waits for dead balls to be taken and nothing of note happening. Atherstone seemed to be coping really well and controlled the pace of the game preventing Stockton from getting their wide men on the ball. In fact they had the next chance on 70 minutes as full back Fitzgerald burst forward and got on the ball firing in a really dangerous effort which Roberts saved well.

The Adders seemed to be tiring a little and the addition of Risbrough added a little more pace, he got round full back Cotton but his cross was cleared for a corner by Haines although the ball could have easily flew into his own goal.

Nathan Mulligan controlled a difficult bouncing ball on the edge of he box and as he drew defenders he rolled it to Hayes who hit it with his left foot but O’Neill got down well to save it for what was the Anchors best chance of the half. 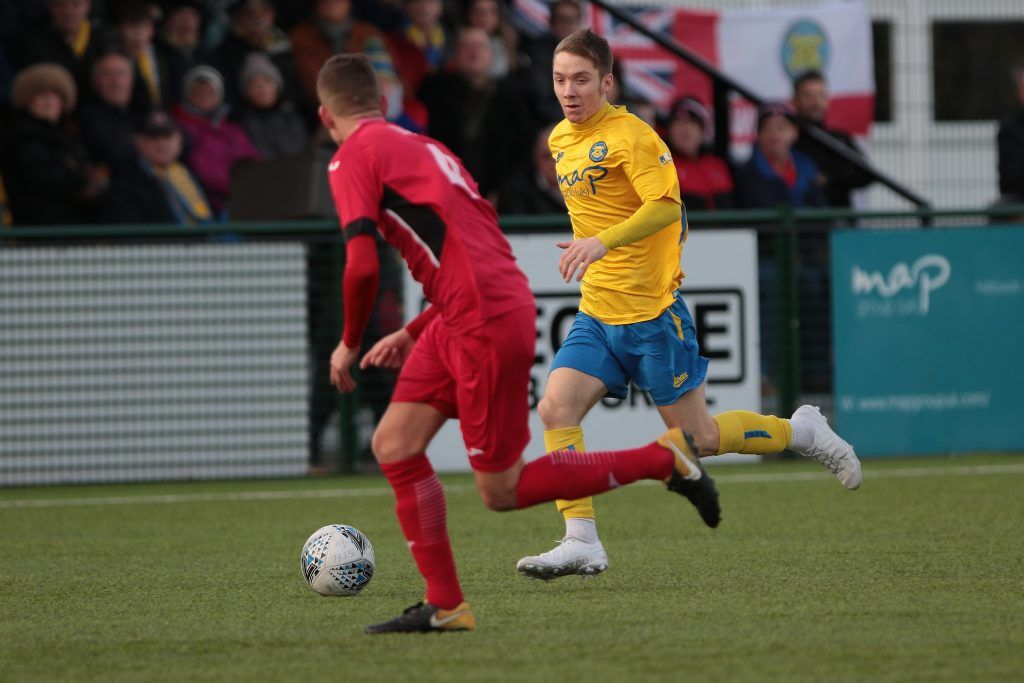 Unfortunately just as it looked like Stockton would step it up and maybe produce the moment to win the game it was Atherstone who did exactly that on 80 minutes, taking advantage of the space left in the middle of the pitch they moved the ball quickly forward Belcher cushioned a volleyed ball back across and OBI dived in to head it home from close range. 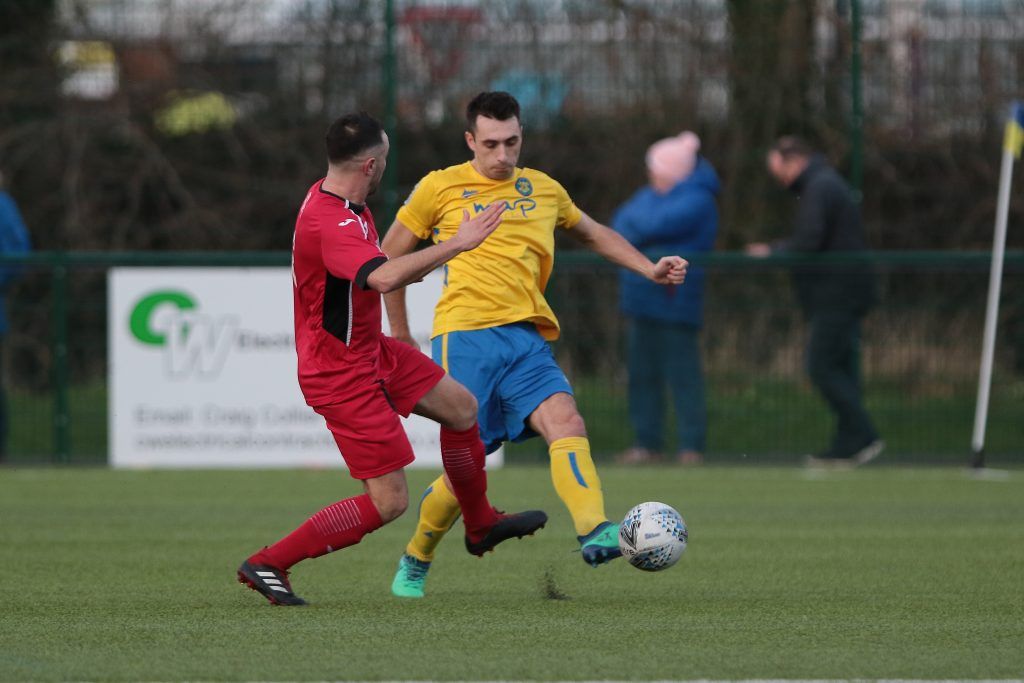 Dan McWilliams got man of the match

The Anchors pressed for an equaliser forcing some free kicks and corners but it just wasn’t happening, delivery wasn’t great or the wind gusted and just frustrated them, O’Neill did make one good save low down on his line from Roberts and a scramble in the box saw Ashby clear from almost on the line but Atherstone hung on for a famous victory. FT 0-1

Cant argue Atherstone deserved the win, but mainly because Stockton didn’t or weren’t allowed to do enough to win it themselves. A very frustrating and disappointing day, but they happen and the Anchors are back in League action on Wednesday and a win will erase some of the bad memories. Time to lick wounds and get back on with the main target of the season. The management will have everyone prepared and back in the right frame of mind for the Northallerton game. Dan McWilliams got sponsors man of the match.