The Anchors earned a well-deserved point at an in form North Shields in a game with few chances and two streaky goals. Stockton were without the injured forward duo of Fred Woodhouse and Nathan Steel, but Pete Bulmer and Danny McWilliams returned to the 16 after missing Saturdays victory over Penrith.
An own goal put the Anchors ahead on the stroke of half time but was cancelled out by a late fluke Robins equaliser which Patton has claimed, in what was good competitive game with both sides getting the ball down and trying to play football on a tricky surface. Both teams unbeaten runs remain intact and the Anchors stretches to 12 games (7 in the League).

The wet pitch didn’t stop both sides trying to play football and in a bright start the early play saw some good passing moves.
Stockton had a shout for a Penalty after just 5 minutes when Owens appeared to have his legs taken by New as he controlled McWilliams cross and was about to pull the trigger, but the Ref waved it away, then a foul on Owens drew a free kick 25 yards out and and Nathan Mulligan hit a lovely curling effort which had Skirpan scrambling across his goal diving low down to push it wide for a corner. 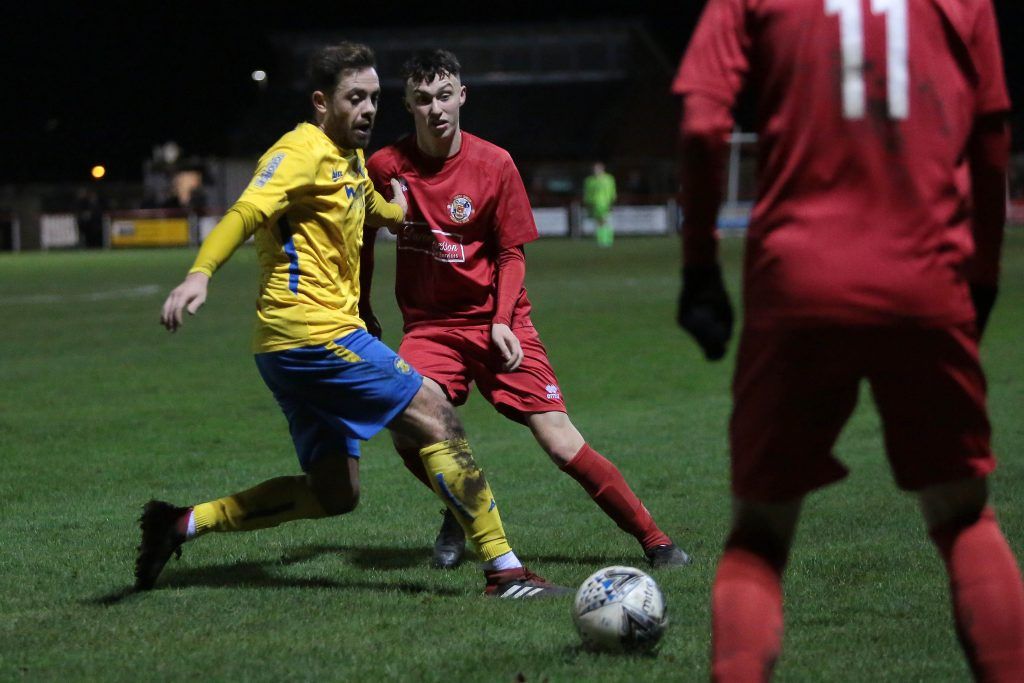 North Shields played some nice football too and worked their way to the edge of the Anchors box more than once but were restricted to a couple of long range efforts which Roberts dealt comfortably with.

Hayes and McWilliams looked the Anchors best outlet and they linked well again Hayes skipped past the full back and pulled it back to Owens whose first time effort was a bit mistimed and flew high over the bar. Nicholson was next to make a break and he intercepted a ball on halfway, found Owens and set off for goal. Owens played it back to him and his cross was driven along the 6 yard box but no one could get on the end and it was scrambled away by the red robins defence. 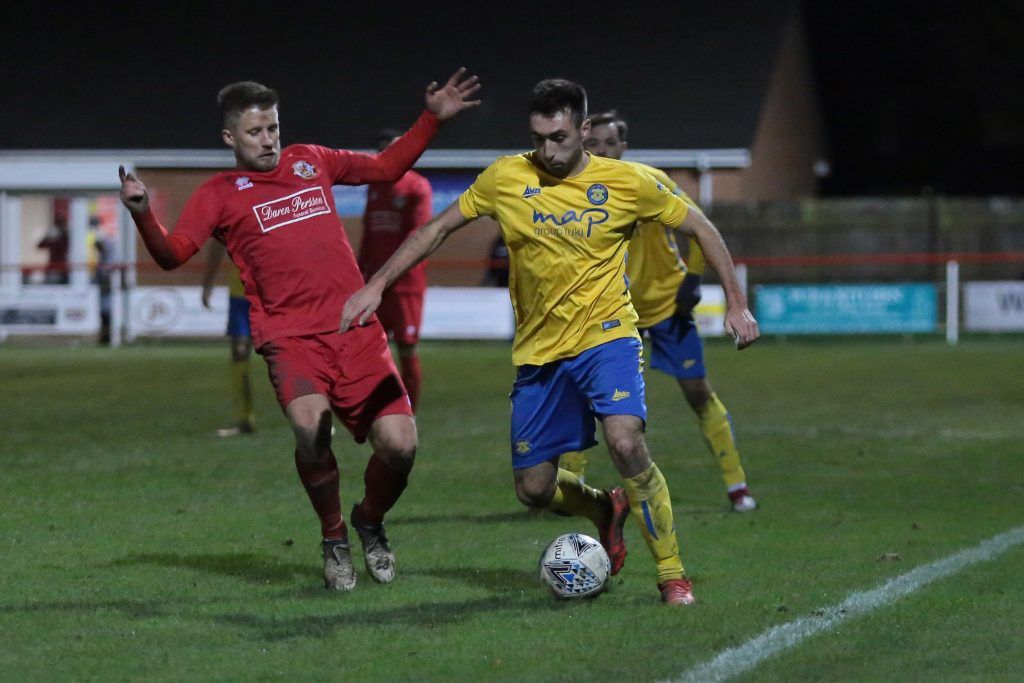 Right on the stroke of halftime the Anchors got the lead they just about deserved. Dan McWilliams cut inside and his right foot shot was deflected just wide with Skirpan stranded. The resulting corner to the near post beat everyone and clipped off North Shields defender ORMSTON who could do nothing but watch it trickle into the net Unfortunately in the melee at the near post Nicholson suffered a gash to his eyelid and had to be replaced by Craggs. HT 0-1 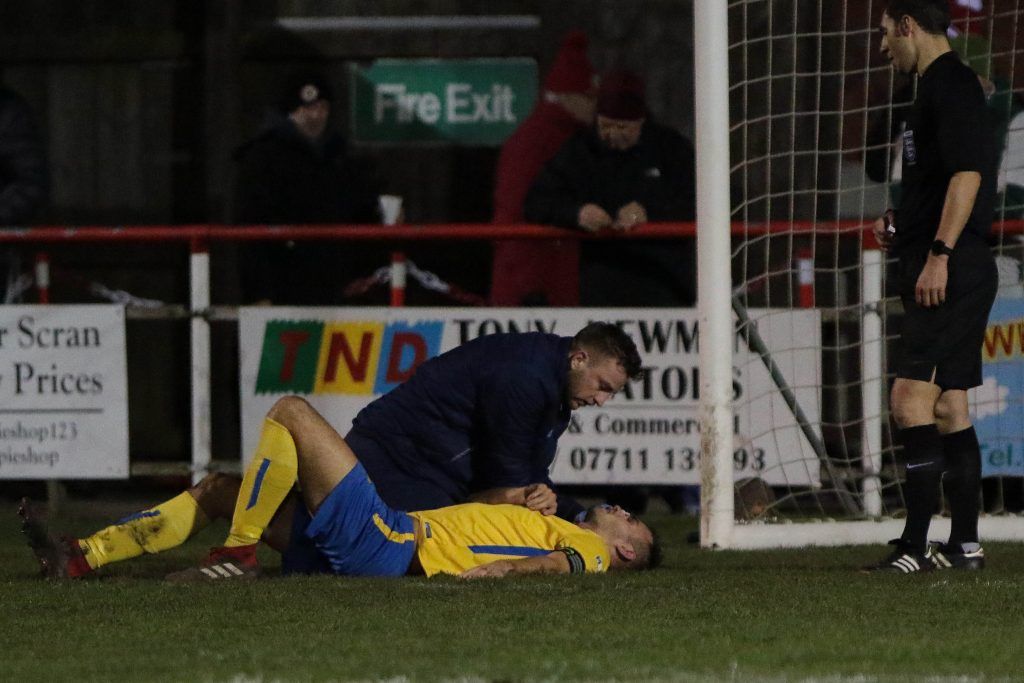 Anyone got a needle and thread? Nicholson receives treatment before leaving the pitch.

The Anchors shaded the first half just about, but in the Second half Stockton had to reshuffle to cater for the loss of the captain and Jordan Robinson stepped back into defence. His first contribution wasn’t far away as good play from North Shields down Stocktons left saw a shooting opportunity open up on 59 minutes but Robinson was out quickly to the edge of the box with a fantastic block to snuff out the danger. 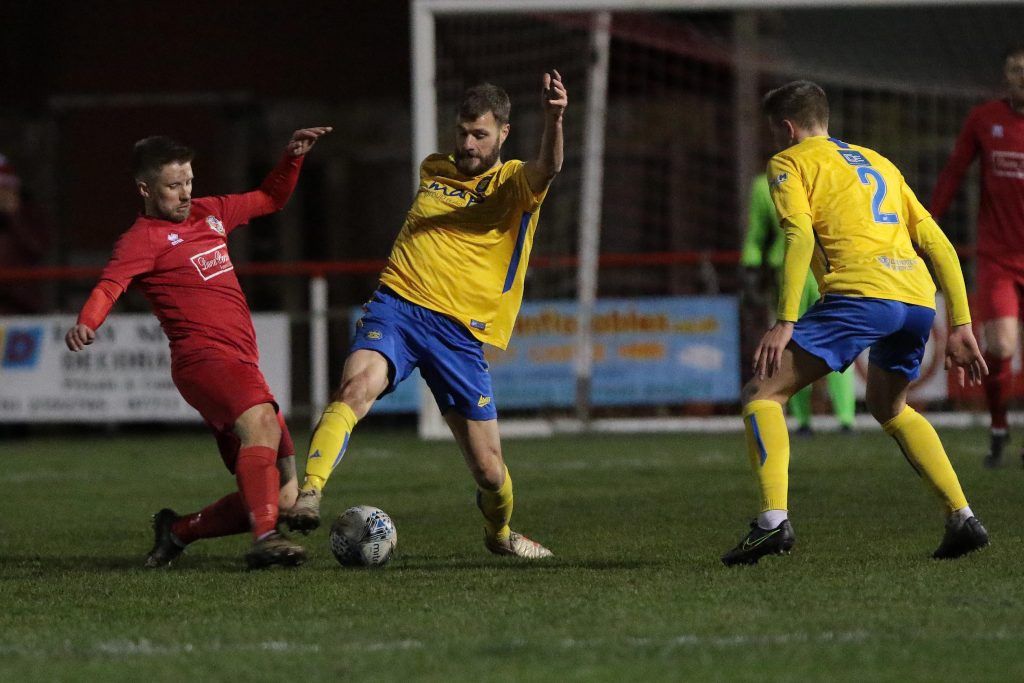 Jordan Robinson was excellent covering at centre half

The Anchors best chance to seal the victory came when King ventured forward and slipped the ball down the channel to Owens, his right foot shot was a little scuffed but it went across the box and was met at full stretch by Max Craggs at the back post but he could only divert the ball onto the post from close range. James Risbrough replaced Jamie Owens for The Anchors on 67 minutes with Kev Hayes switching to the right and Mikey Roberts moving to centre forward and Hayes continued to cause problems. 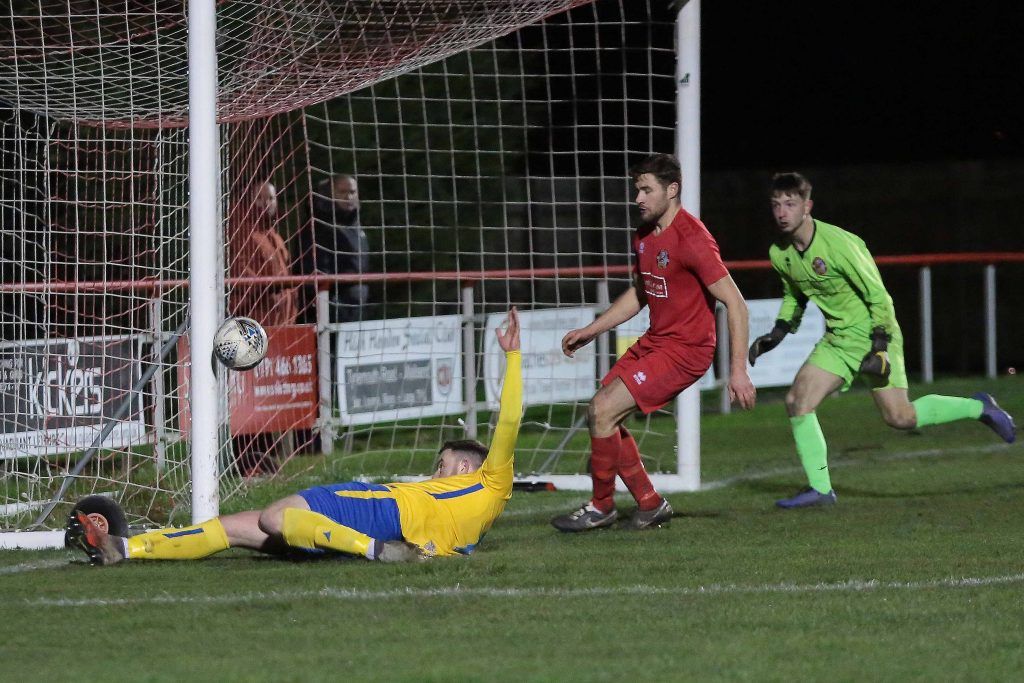 Stockton were enjoying a good spell and from a partially cleared corner on 70 mins James Risbrough’s goal bound pile driver from 22 yards thundered into a North Shields body a couple of yards from goal. 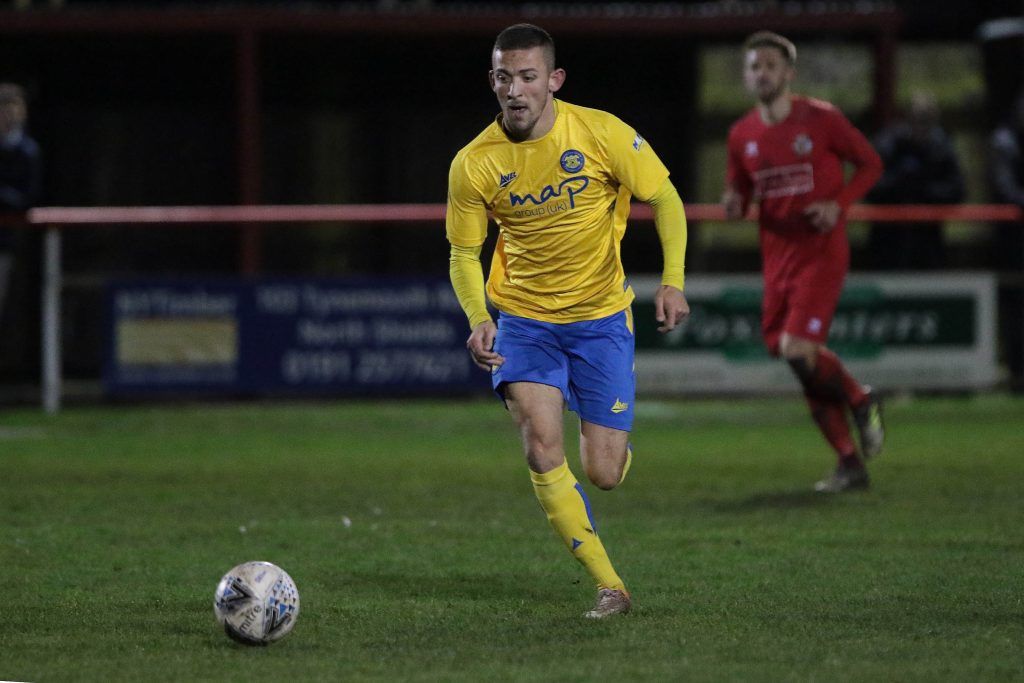 Risbrough had a good impact when he came on

It was then North Shields turn to apply a period of pressure and they forced 3 corners in quick succession but Stockton’s defence was up to the test on each occasion and an equaliser had looked unlikely for North Shields as they hadn’t seriously tested Roberts in Stockton’s goal until an utterly bizarre incident.

A back pass from Craggs on 80 minutes looked like a straightforward clearance for Roberts but the keeper hammered the ball forwards it hit Coulthard full force on the back and deflected back past him and although it looked like it was already over the line Kyle PATTON made sure and tapped it into the open Stockton goal for an unfortunate equaliser. 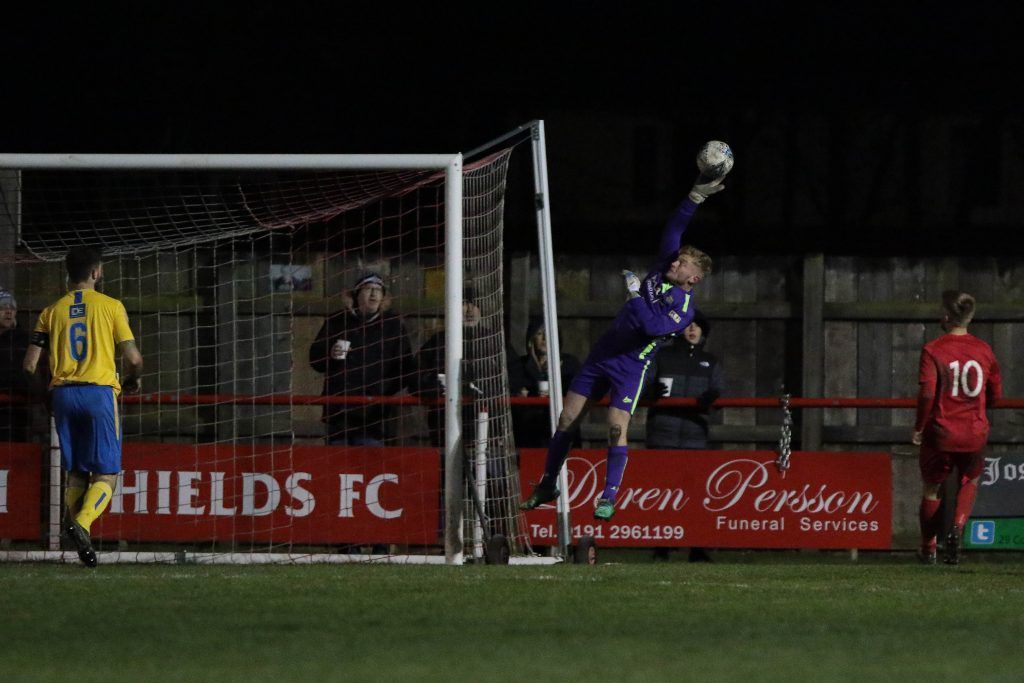 It was anyone’s game now Stockton continued to look threatening on the break while North Shields pressed for their own winner. Right on time North Shields crossed from Stockton’s left and a deft touch from Jamie Clark opened up a chance for Patton but Callum Roberts got down to his left and made a fantastic save to keep the scores level. 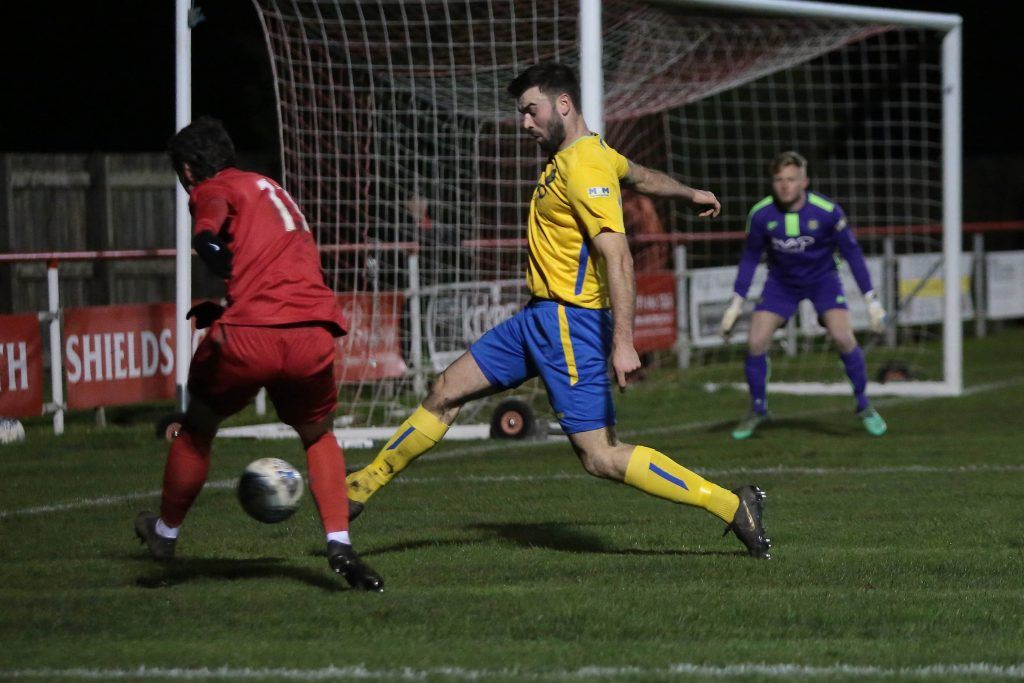 Coulthard was a Rock as always at the back

There was still chance for The Anchors to look for a winner of their own and after good work by Risbrough down Stockton’s left, Stockton forced two corners deep into injury time, but Shields defended them well. FT 1-1

Another good display and result for Stockton against a very good North Shields side that will surely be in the promotion shake up come the end of the season. A lot of very good solid performances in every department for Stockton, with Tom Portas edging the honours for Man of the Match.
Lead extended at the top and a tough game ticked off. Onto another difficult match away to Whickham this weekend.