A late Nostell equaliser meant Stockton Town will have to replay this game on Wednesday and it prolonged their search for a first win in the FA Cup, but this was one match they could have had sewn up before half time, Kev Hayes was at his mercurial best but a combination of good goalkeeping and last ditch defending kept the score down and enabled Nostell MWC to give it a go in the second half.

Assistant Manager JD Briggs was in charge today and there was several changes in the line up. Michael Arthur replaced Callum Roberts, who is suspended, Jamie Owens, Cieran Jackson and Max Craggs came in for Mikey Roberts, Lewis King and Tom Portas the latter two being unavailable.

The Anchors had lots of early possession as Nostell sat back and tried to deny space, but they struggled to contain Kev Hayes and he had them on their heels at times. Nostell keeper Dan Rusling made the first of a string of good saves to deny Stockton skipper Nicholson after just 2 minutes when he met a corner at the far post and crashed a header goal wards, Rusling acrobatically beating it away. 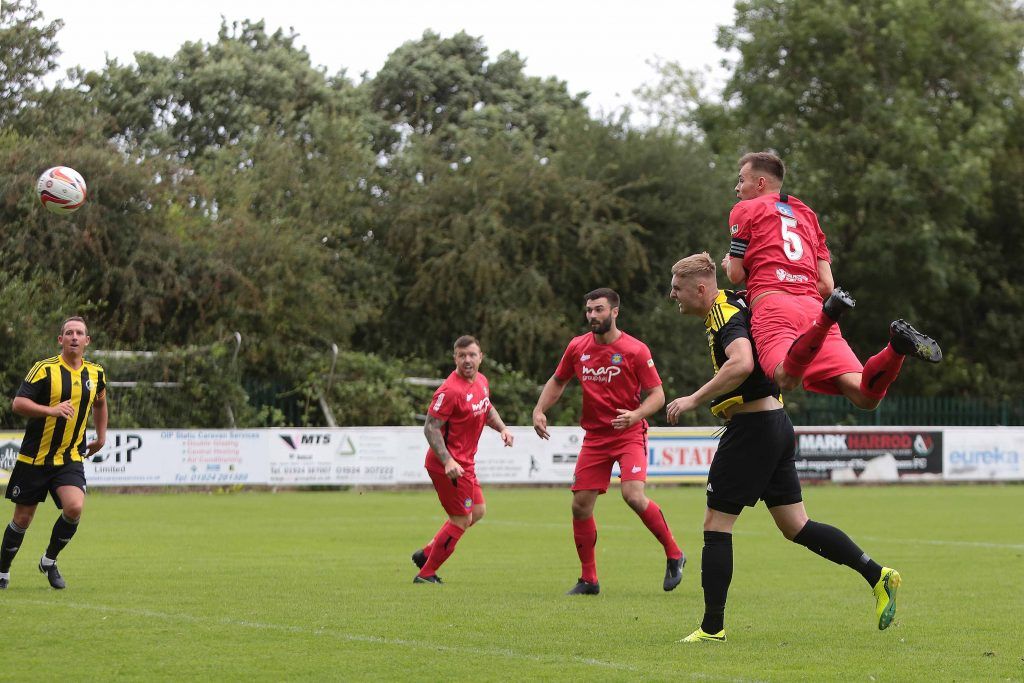 The Anchors were smelling blood and on 7 minutes Kev Hayes fired in a curling left foot shot from out wide which flew across the goal but hit the inside of the post with Rusling stranded, Owens took the rebound on the half volley but hit it wide from the edge of the box. 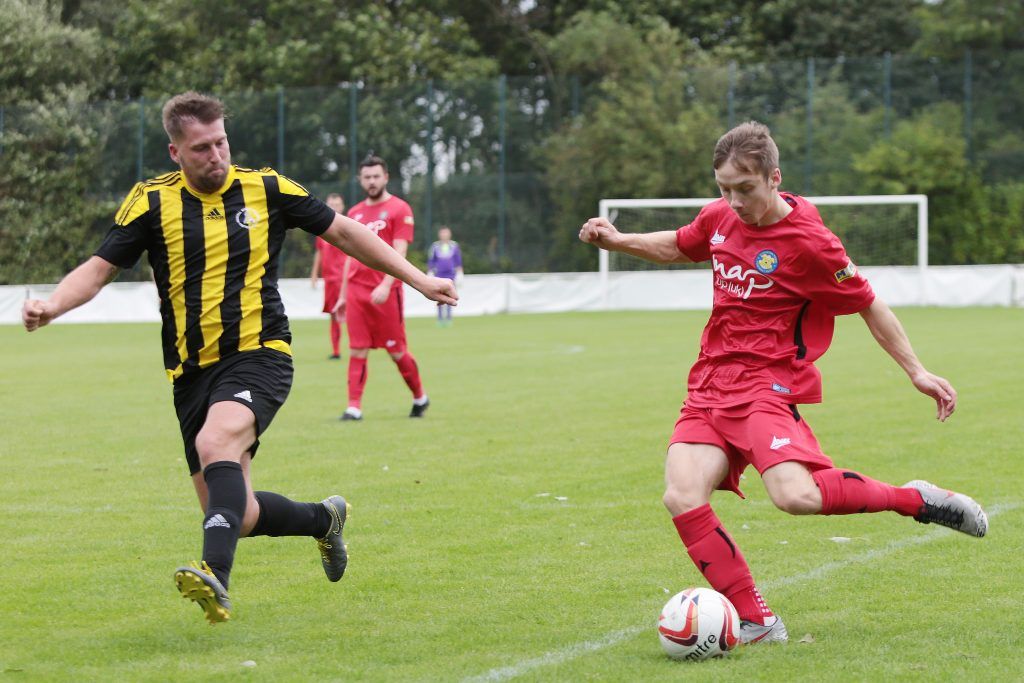 The pattern continued and Nostell looked over worked at times in defence but the Anchors were just not getting the bounce of the ball or jelling like they did in the previous weeks victory and this led to a loss of tempo bringing Nostell some relief and they enjoyed a bit of the play themselves. Nostells best effort of the first half came during this spell from Collier as he picked up a ball on the left hand side of the box but was wide of the target with his shot.

Nicholson burst forward on 31 minutes and found McWilliams in space, his cross fell to Hayes who’s cracking shot was deflected for a corner, this gave the Anchors a lift and they finished the half strongly. Hayes, again, then bringing another save from Rusling this time with a right foot effort after some neat build up involving Owens and Robinson. The Anchors pressed hard for a goal, Jordan Robinson had a golden opportunity but dragged his shot wide from 12 yards out on 44mins after Woodhouse had got behind the defence and pulled the ball back to him. Right on the stroke of halftime Stockton finally got their noses in front after Nostell had blocked another effort on the line the ball was part cleared and Jackson rolled it to Jamie OWENS  who fired it home from 20 yards with his left foot giving Rusling no chance this time HT 1-0 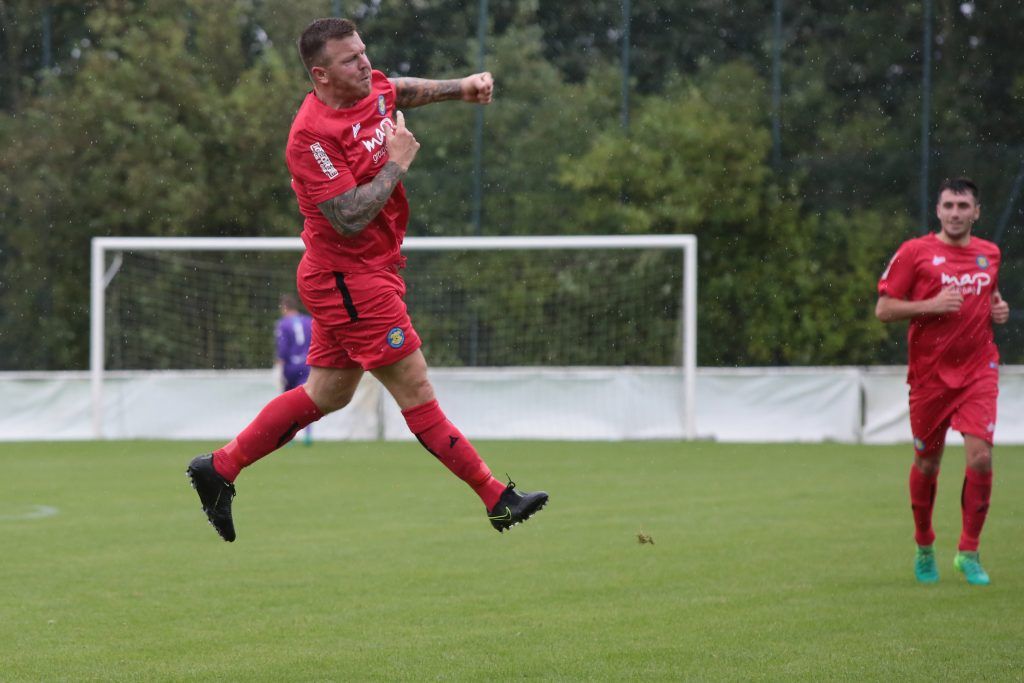 Jamie Owens jumps for joy after scoring the opening goal

Stockton’s half time cuppa must have been cold because they looked sluggish in the opening minutes and despite a warning they conceded on 48 mins. Adam HAYTON curling one in from the edge of the box after good work from Mole and Owen down the left. It took the Anchors a few minutes to pull themselves out of their slumber and it was Kev HAYES who got the goal his performance deserved when he finished across the keeper with his right foot after good work by Jackson on the left. 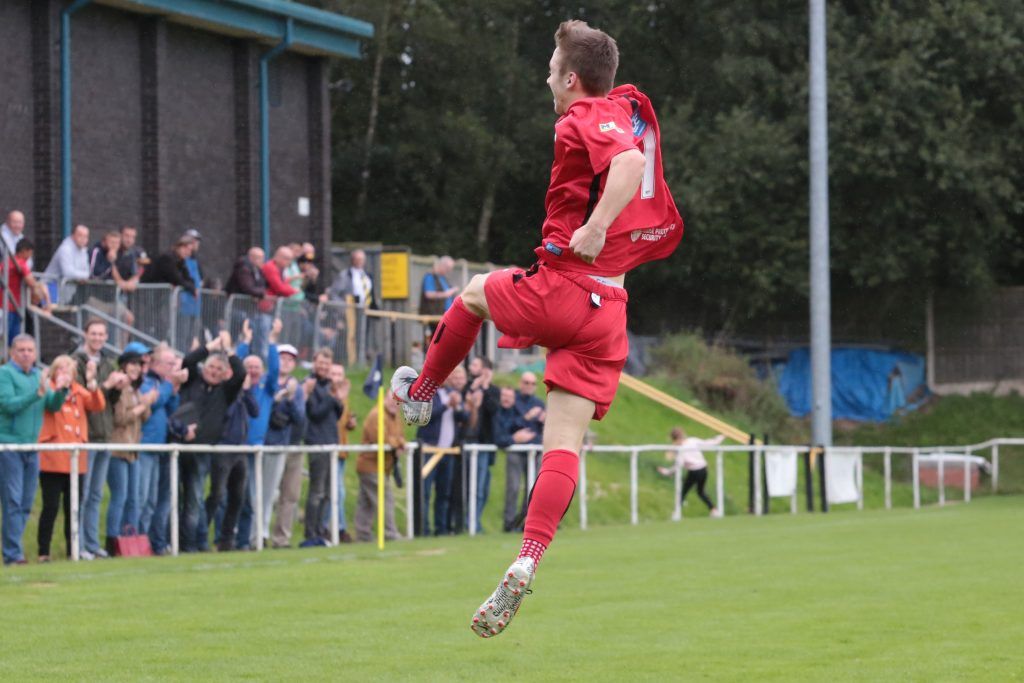 The Anchors looked to be doing enough and Cieran Jackson flashed a shot just wide from sub Roberts lay off but Nostell were growing in confidence and starting to create things, Jack Owen especially on the left was causing problems, bringing a good save out of Arthur as he cut in and shot. On 78 mins Nostell sub Edwards should have equalised but he headed over from close range after a free kick was headed back across goal. The Anchors seemed to be making hard work of it all and the home side pushed for an equaliser which eventually came on 84 mins Danny EDWARDS making no mistake this time with his finish after Colliers flick had come back off the bar. The Anchors showed some urgency and almost found a winner as Robinson met a corner full on only to see Rusling and a defender stop it on the line, somehow the Nostell defence blocked the follow up from Nicholson as well to add to the frustration for Stockton’s players and supporters. 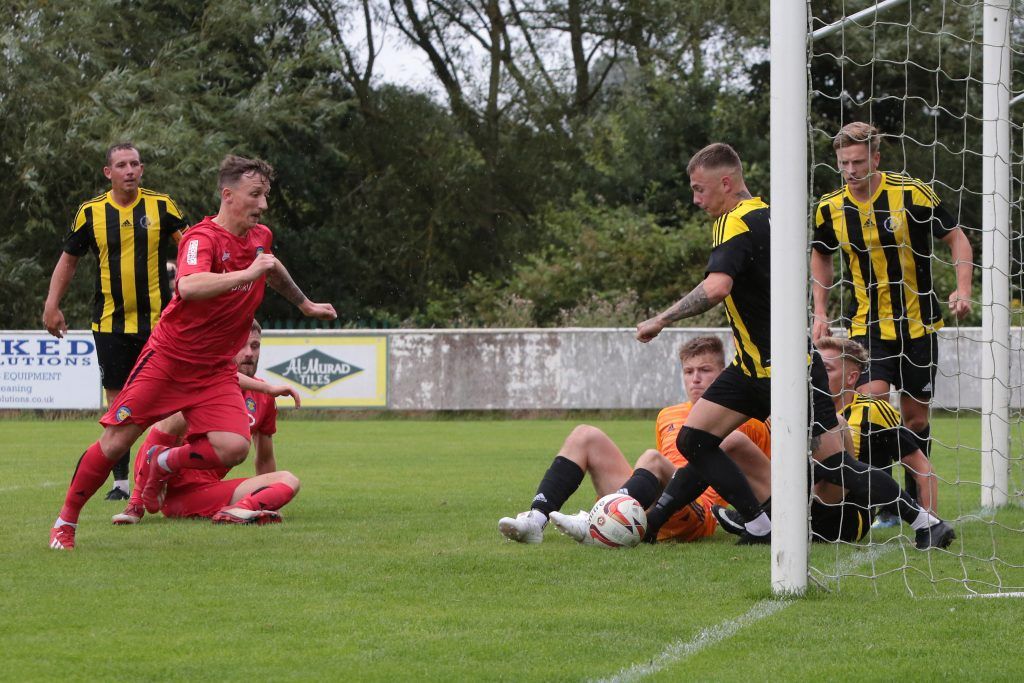 Another Goal Line clearance to thwart the Anchors

Not the free flowing performance of a week ago, but the Anchors had enough opportunities to have killed this match off in the first 45, the longer it went Nostell looked increasingly dangerous as their confidence grew towards the end of the game. Nostell’s tactics meant the match didn’t have a great tempo and that didn’t suit the Anchors but some individual performances, especially from Kev Hayes, looked like being enough. Nostell have to take some credit however for defending with their lives at times and taking advantage as the Anchors switched off. The players will get the chance on Wednesday to finish off what they started but they know they will have to more clinical in their approach.