And so the fantastic winning run continues and the Anchors inch ever closer to securing a promotion spot. Yesterday’s game was in danger of becoming a farce in the opening 20 minutes but credit to both sides as they managed to produce a match full of quality and as you would expect from two good footballing teams, they both played better against the wind than with it. First half goals from Franks and Hayes looked like setting up a comfortable victory for the Anchors but an early response in the second-half from the Steelmen gave them renewed vigour and they carved out several good chances only to find out a couple of the reasons Stockton are where they are, excellent defending and a superb goalkeeper.

The first 15 minutes of the game was spent mainly in the Stockton town 18 yard box as Consett had as much difficulty trying to control the ball and weight of passes as the defenders had in clearing it. The ever lively Luke Carr had a shot pushed away by Roberts and Calvin Smith fizzed a 25 yarder just over the bar. But Consett failed to capitalise on a stream of corners and the assistance of the strong winds.

The Anchors found their feet after a while and as Consett would prove later it was a bit easier to play football into the wind and Tom Portas began to gain some control in the midfield for them.

Stockton took the lead on 21 minutes, a long ball forward by Nicholson held up a little in the wind and caused a mistake by the normally assured Purewal and the ball came to Roberts who managed to get it out of his feet and when he looked up he slipped the ball to the advancing Jonny FRANKS bursting into the box from the left who lashed it home left footed from 12 yards. 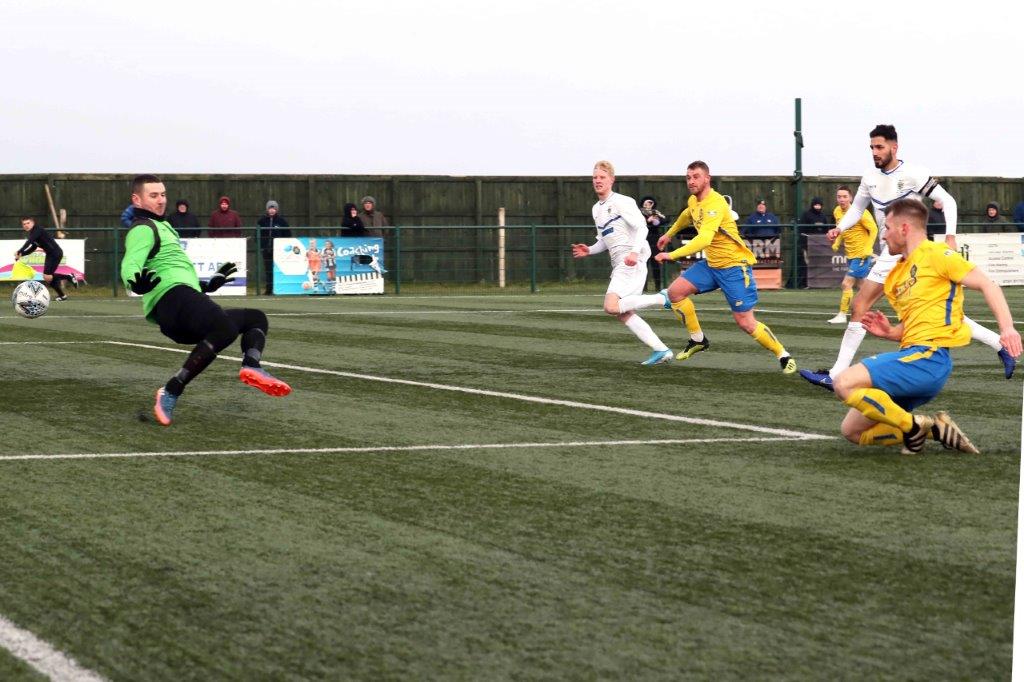 Franks smashes the ball past Hayes to open the scoring

Confidence flowed through the Anchors after that and they continued to look the more dangerous as the Steelmen ran out of ideas a little, Franks flashed a ball across the box but it was just out of reach of a stretching Hayes at the far post as the Stockton wide men caused problems, with only Luke Carr offering anything for the home side as he brought another decent save out of Callum Roberts.

The Anchors increased their lead on 41 minutes and it started well inside the Anchors half, Portas again was at the heart of it, driving the team forward, Hayes cut along the 18 yard box and it looked like the chance had gone, but the ball came to Robinson and then Franks in space played a nice ball down the side to Woodhouse who’s cross flicked off Allen to Kev HAYES who touched it to kill the pace and volleyed home the dropping ball through the legs of his namesake Kyle in the Consett goal. HT 0-2 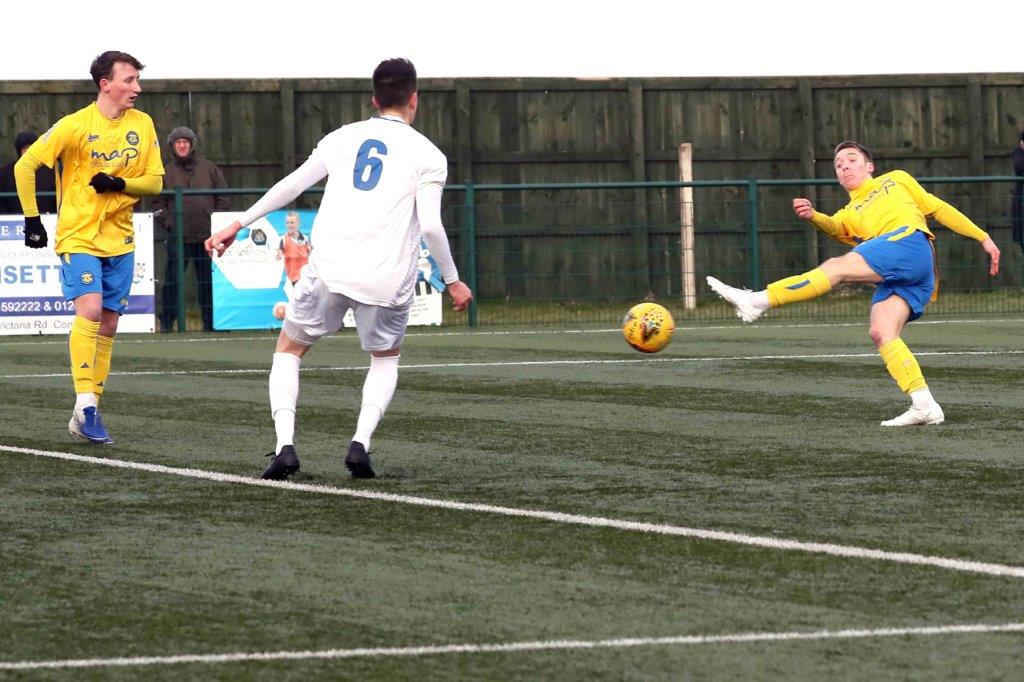 Any thoughts of an easy Anchors victory were dispelled within a couple of minutes of the restart as the lively ALSHABEEB was set away by Pearson and he raced into the box and finished neatly past Roberts. Game on as they say.

Consett just like the Anchors found it easier to play into the wind and they passed it about well and the Stockton players just like Consett in the first half were unsure whether to press or sit off and the Steelemen carved out several decent chances. Full back Metz couldnt keep his balance and scuffed an effort from close range into Roberts hands as the Stockton keeper began to earn his corn for the second game in a row. 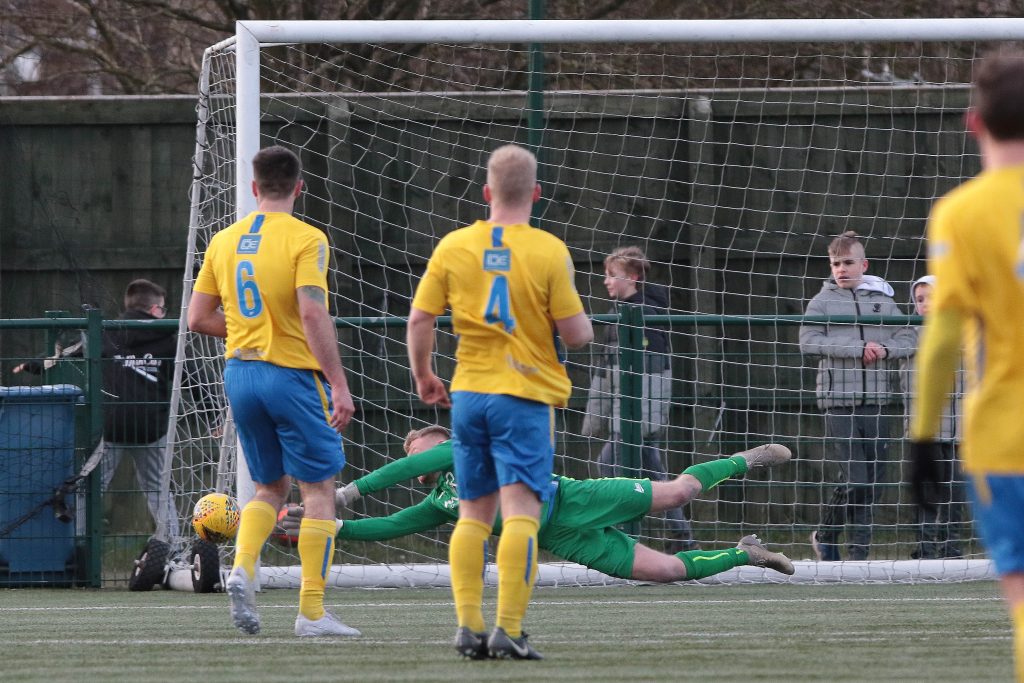 Callum Roberts made a string of important saves

Luke Carr cracked in a low drive which Roberts pushed away and then made an important block as Pearson latched onto the rebound, but Metz probably squandered the best chance for Consett on 64 minutes as they worked the ball out to the fullback inside the box in space again but he lashed at his shot under McWilliams challenge and he blazed it over the bar from a good position. 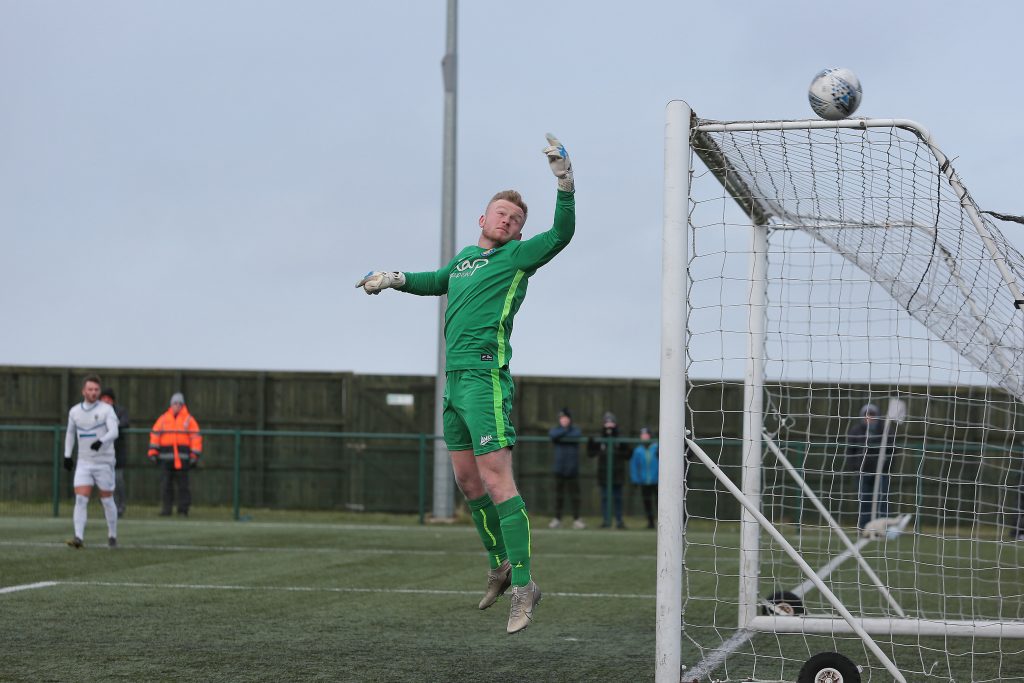 The Anchors had their opportunities to kill the game off, Lewis King was set free on the right hand side and his effort from the edge of the box was just deflected wide. Woodhouse and Nicholson both sliced their shots when well placed and Hayes had a couple of decent shots at goal but one was too high and the other was collected comfortably by the keeper.

The Steelemen’s top scorer Dale Pearson was denied twice in the last ten minutes, firstly Callum Roberts produced a stunning one handed save from his header which he thought was already a goal and then 3 minutes later he was robbed by a super last ditch tackle by Nicholson just as he was about to pull the trigger inside the box and its those type of things that keep you top of the League and unbeaten in your last 19 League games. FT 1-2 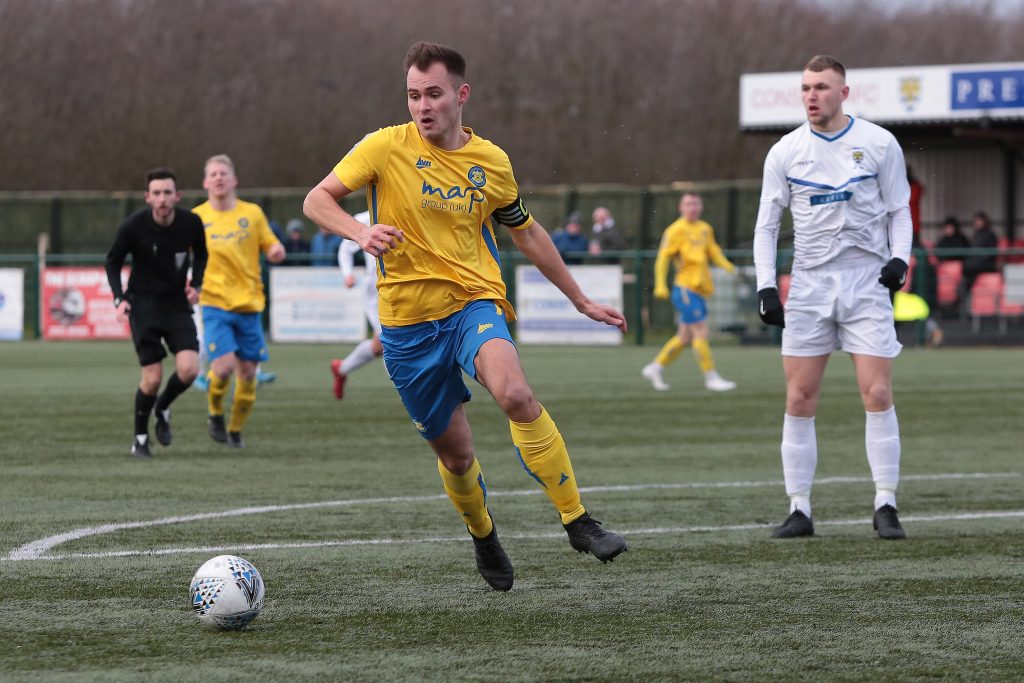 Skipper Nicholson made a vital tackle in the last 5 minutes

Fantastic result for Stockton in very trying conditions and in the face of severe pressure from an excellent side they stood firm and never flinched. The work rate and determination being shown is incredible as this season just seems to be going more and more to plan as each week comes and goes.
Tremendous performances again from the lads but Callum Roberts gets the MoM for the second time in a week for a brilliant display and possibly the save of the season.

A week to rest up and prepare for what should be a cracking derby match next week at home to Guisborough with a bumper crowd expected again, exciting times for the Anchors and their fans.