Another excellent crowd of almost 600 gathered as Manager Michael Dunwell and Asst. JD Briggs marked their 300th game in charge together by making just one change from Wednesdays victory at Northallerton. Jamie Owens replacing Mikey Roberts.

The game started with the visitors set up to frustrate and it worked well, Stockton had more of the ball but it was difficult to get any momentum and it was 10 minutes before any action of note when Hayes clever chipped ball forward picked out Woodhouse’s run and his cross was scrambled clear. The resulting corner saw Coulthard get there first but he couldnt get enough contact on the ball. 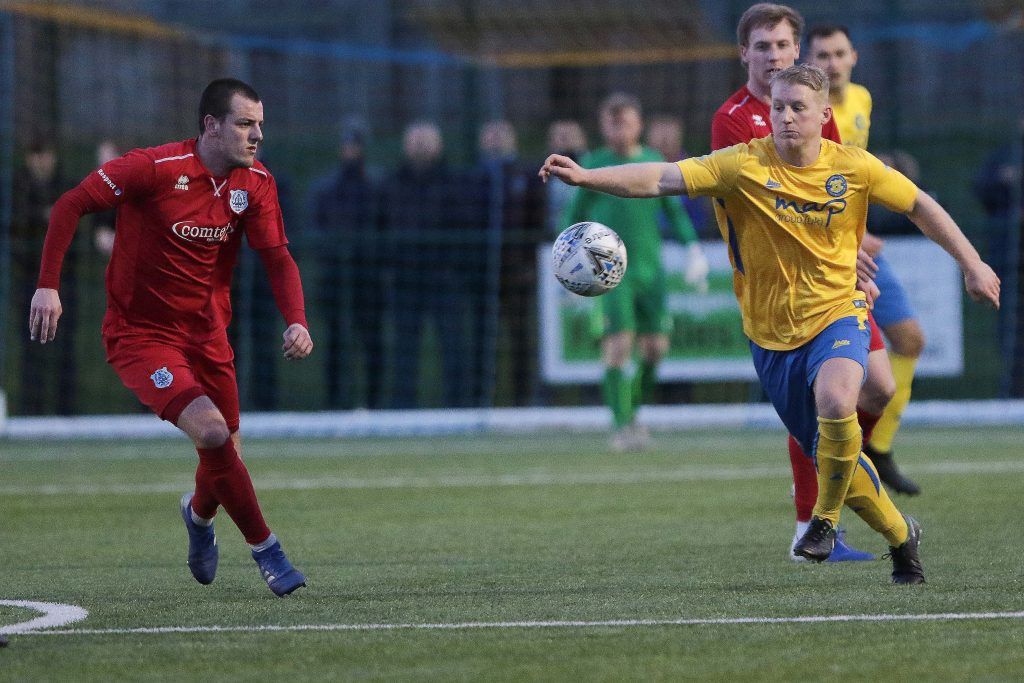 Tom Portas was always in the thick of it today

Woodhouse had a great opportunity to open the scoring on 18 minutes, Portas found some space and attacked the box as he drew he defender to him he played the ball to his right to Woodhouse charging into the box but he was slightly off balance as he hit his shot and it flew wide.

The game settled into a period of scrappy play, the Anchors were trying to push but Bishops managed the game well and as Stockton got a little sloppy the twoblues enjoyed some possession, Callum Roberts called into action for the first time punching out a corner which eventually landed to Michael Hoganson who’s long range effort drew a comfortable save from him.

As the half wore on, Stockton became more threatening. In the 33rd minute, Kevin Hayes stood up a great cross ball but just too high for Max Craggs who was unable to make meaningful contact with his head. The Anchors picked up the pace and a ball in by James Risbrough was controlled by Owens who turned and fired it just wide.

Nick Liversedge was then forced into a save at full stretch after Hayes cut inside from the right and fired in a left foot effort.
A minute before half time it looked like ending goalless, when another difficult chance went begging after Risbrough skipped past the full-back and played in a lovely cross ball met on the volley by the on-rushing Hayes but he was unable to keep his effort from 10 yards down. 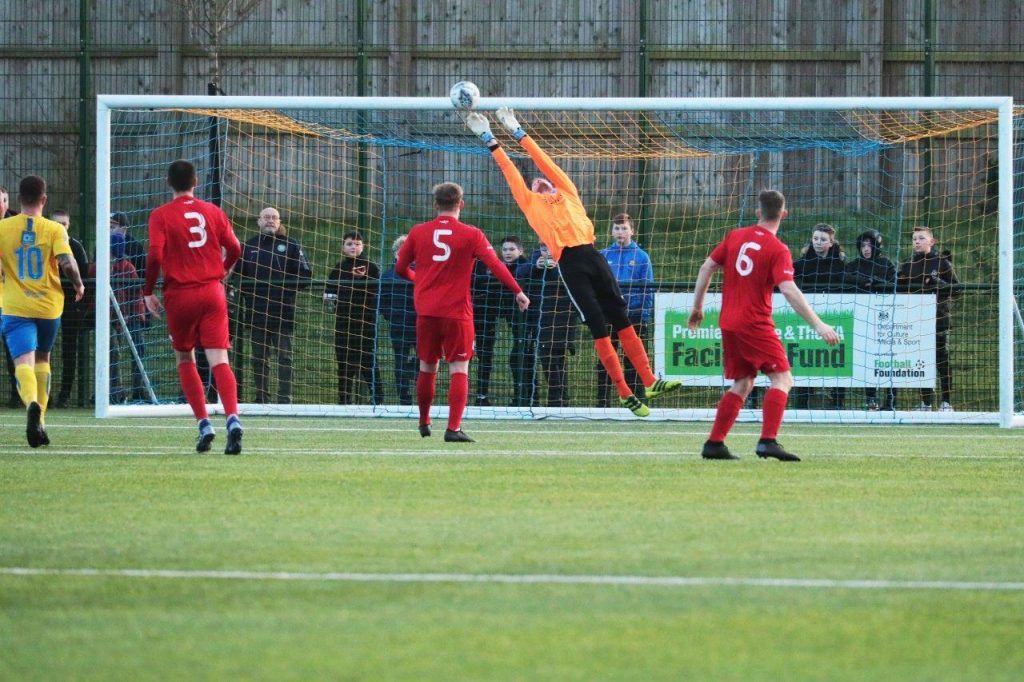 Liversedge just gets his fingertips to Hayes goal bound shot

Eventually the opening goal came for the Anchors right in the stroke of half time, Risbrough was sharp to pickpocket an unsuspecting Bishop Auckland defender on the edge of the box as he took a short goal kick from Liversedge, he slid in a pass to OWENS who tucked it away comfortably from close range it was the perfect time to take the lead. HT 1-0 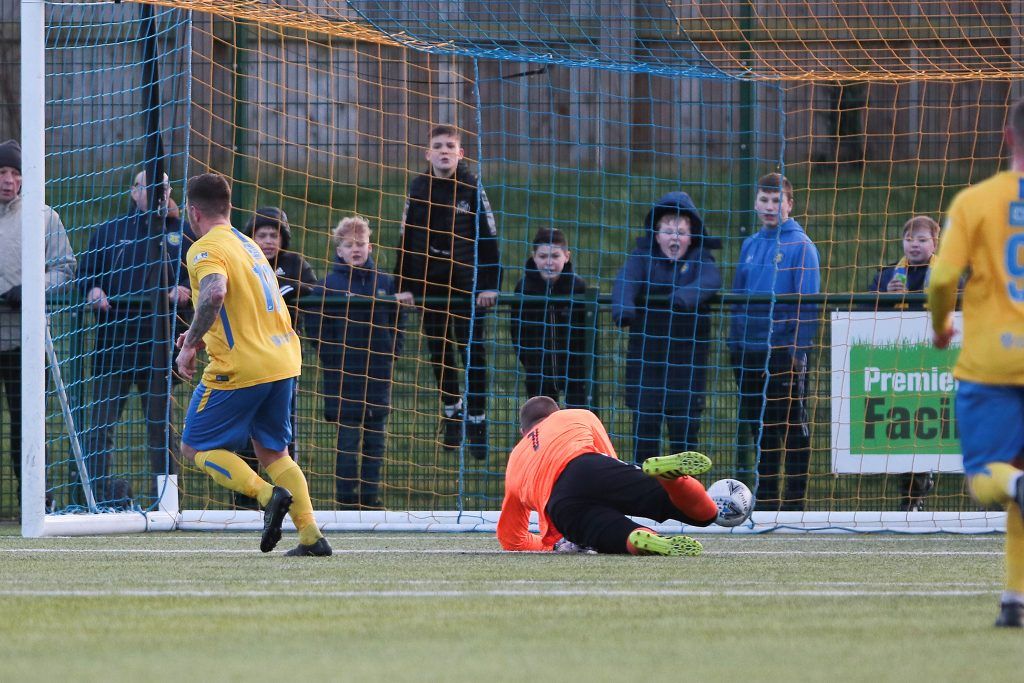 In the second half, Bishops started on the front foot a bit more but this suited the Anchors as it opened up space and the first real chance came as a corner was cleared to Hayes and he raced the full length of the pitch leaving players in his wake but as he cut inside his shot was deflected just wide.

James Risbrough released by Adam Nicholsons accurate long pass closed in on goal from the left but his well struck effort was saved by Liversedge with his legs at the near post. 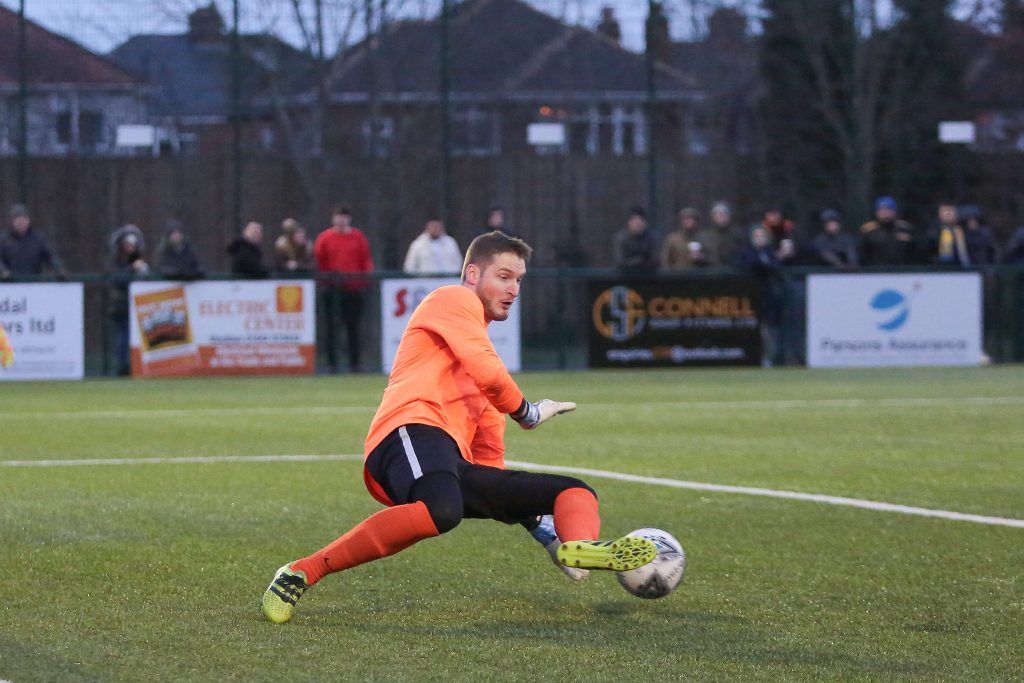 The Anchors finally and deservedly increased their lead on 58 mins with a super worked goal and a cracking headed finish it was that man Portas again bursting into the Bishop half playing a lovely weighted pass to McWilliams who took it in his stride and swung in an excellent cross that was met at the far post with an equally impressive powerful header from Jamie OWENS leaving Liversedge clutching at thin air. 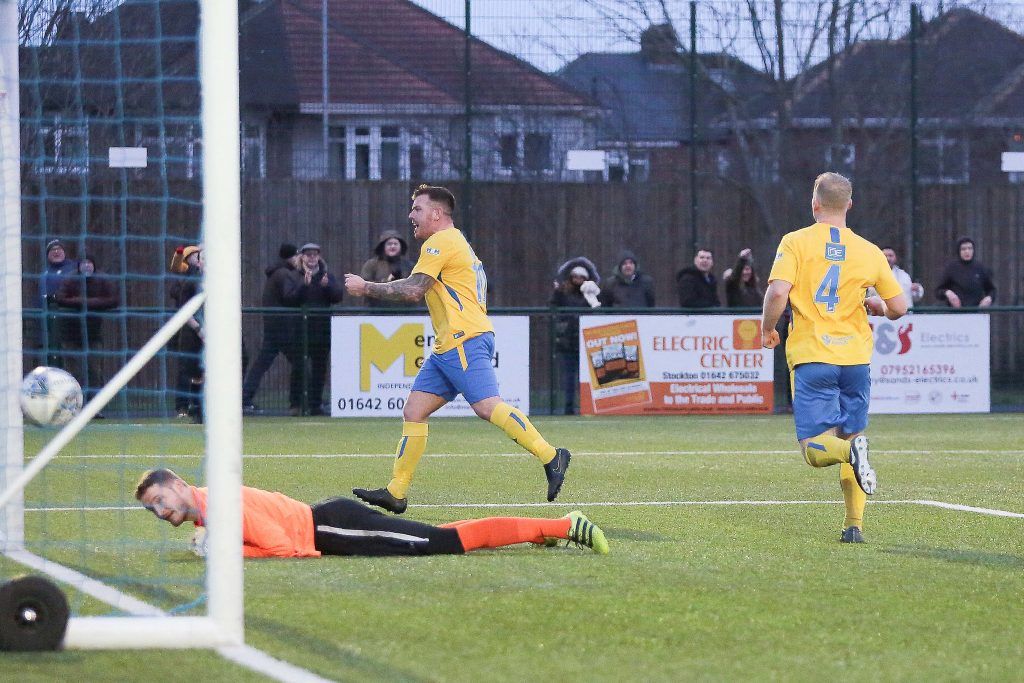 It looked as though Stockton would only continue to add more goals as the game opened up and they started to swamp the twoblues, Woodhouse and Owens both going close to extending the lead and Liversedge again saving with his legs this time from McWilliams, but it was Bishop Auckland who crucially got the next goal out of nowhere on 68 minutes, Kieron PARNABY in space 25 yards out struck a superb unstoppable effort into the corner of the net past Roberts. That gave Bishops a bit of momentum,they pushed men forward and ensured Stockton would have to be on their guard until the end. 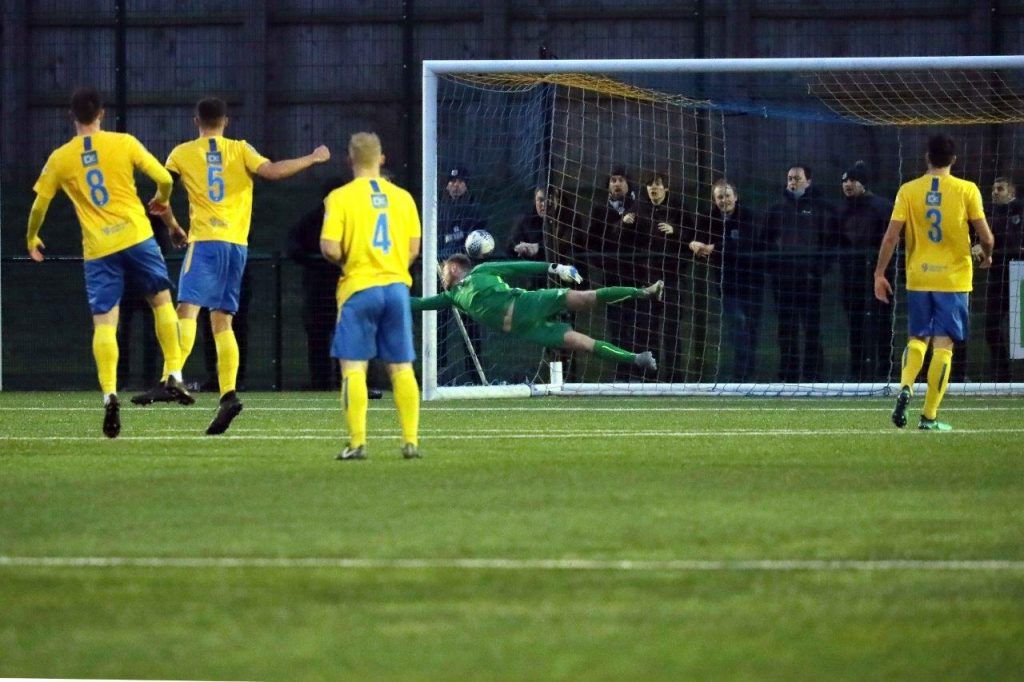 Roberts had no chance with Parnaby’s shot

A few minutes later Bishop Auckland had a an extremely dangerous free kick on the edge of the box following a dubious decision by the referee. Hoganson was unable to make it count as he sent his effort wide however.

Mikey Roberts had two chances to ease the pressure but his attempted lob after being picked out with a fantastic long ball by Callum Roberts, was plucked out of the air by Liversedge and then as he tried to turn in a cross ball from Jackson it ran agonisingly wide. 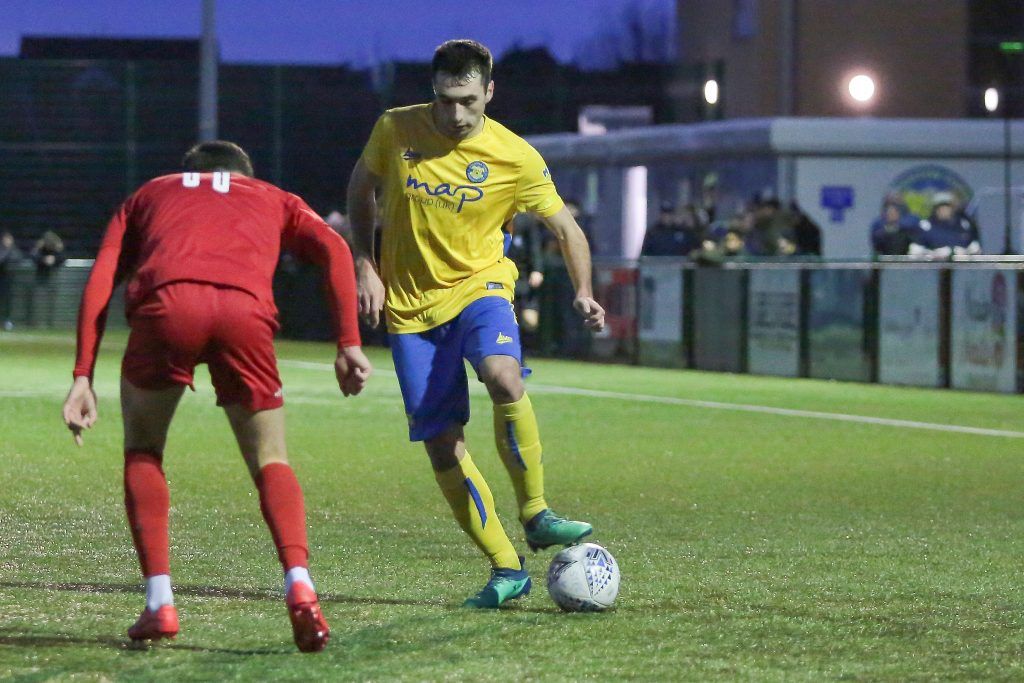 Dan McWilliams was heavily involved at both ends of the pitch today.

Bishops pressed hard but their best chance for an equaliser came on 90 minutes when Chris Winn was released in the box with just Roberts to beat but the long legs of skipper Nicholson managed to catch him up and sliding in he nicked the ball away just as the experienced striker was about to pull the trigger. FT 2-1 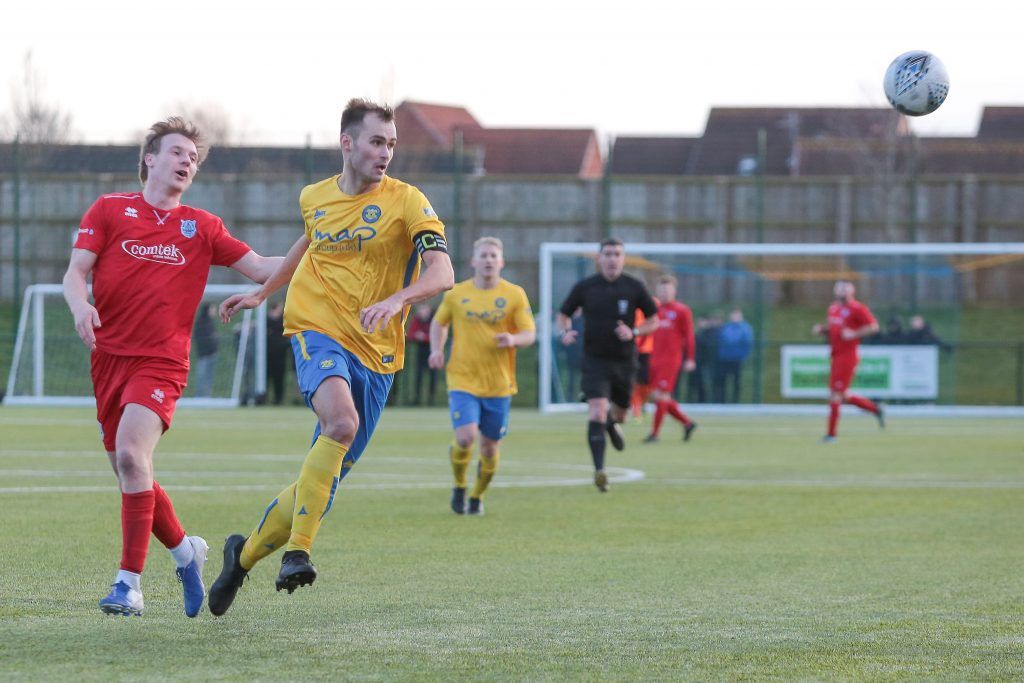 Adam Nicholson made a superb last ditch tackle right at the end of the game.

Another game which probably could have been a little more comfortable if they’d taken just one more of their chances, but job done without too many problems for the League Leaders. Coulthard, McWilliams and Portas were excellent again sponsor’s MoM was James Risbrough who is benefiting from a run in the side.

The Anchors have bounced back well after last weekend’s disappointment with two hard working victories making it five league wins in a row now and keeps Stockton six points in front of Shildon heading into next weekend’s mouthwatering clash between the two top sides in the ENL1 at Dean Street. Before that game, there is a tough Durham Challenge Cup tie at Northern Premier League Premier Division league leaders South Shields. Stockton have never met the Mariners and with them sitting well clear at at the top of the table it will be an interesting game on Tuesday night.