It was October the last time the Anchors lost a game and today was their fifteenth match since then and in truth, they never looked like losing in another hard fought derby game played in front of another huge crowd. The result was decided by two great finishes from mercurial winger Kevin Hayes who was Billingham’s torturer in chief today.

Fred Woodhouse returned to the starting line up and with Jordan Robinson suffering an injury in the warm up, Nathan Mulligan took over his spot in the team just before ko.

Stockton started the game on the front foot and they moved the ball around well playing in between Billinghams lines and getting it wide. After just 5 minutes, Dan McWilliams played the ball into the path of Pete Bulmer running forward into space he played it quickly to Mikey Roberts who shot from just inside the box and keeper Brad Young made the first of several good saves, in an impressive display from the youngster, low down to his right, unfortunately Roberts pace took him just too far to convert the rebound and Billingham’s defenders cleared it. 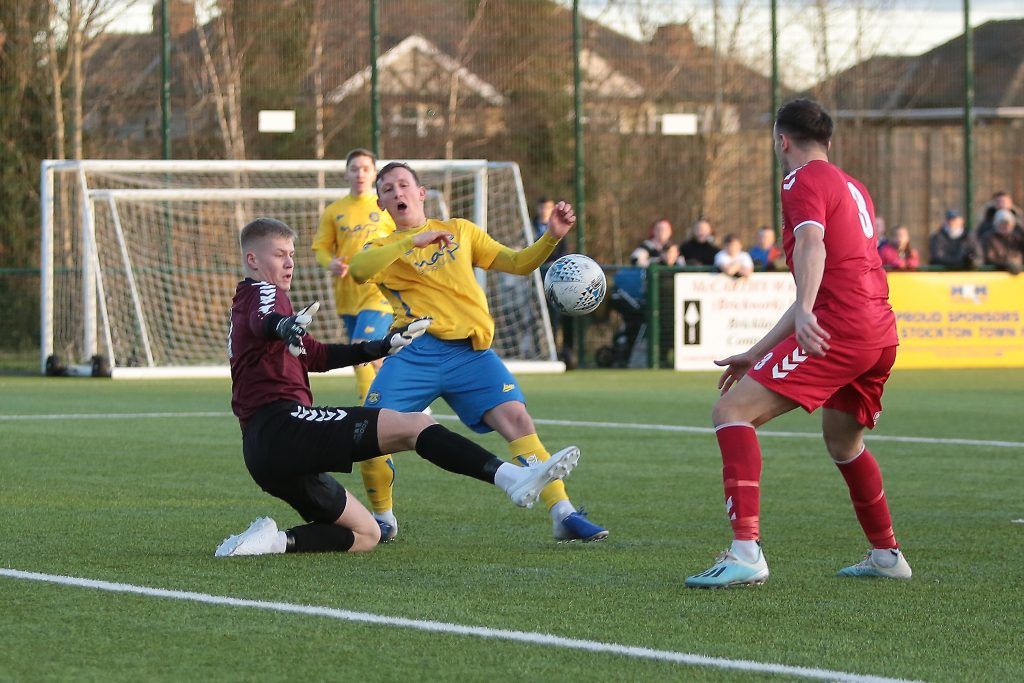 The Anchors then had two good opportunities within a minute, as Hayes got involved, bursting forward and playing it to Woodhouse who played a one two with Roberts before crashing a shot in which was blocked out for a corner. Portas then worked a good position for McWilliams who’s cross found Hayes at the far post and he brought another good save out of Young who could only push it out to Roberts but as he pulled the trigger 10 yards out skipper Lee Moore made a super block to keep the visitors on level terms.

Billingham Town were pressing forward when they could and Jamie Davis got on the end of a corner but couldn’t direct it goalwards. Callum Roberts gave the ball to Nicholson and he sent a long raking pass forward to Hayes who showed his usual brilliant control skipped past Flounders and played in Bulmer whose goal bound effort was deflected onto the roof of the net by the toe of Howes boot who just got back in time to cover. All of that inside the first 17 minutes. The visitors managed to gain a little control after that and took the sting out of Stockton’s attacks, working very hard in numbers but when they did break out and attack they met with the solid defence this team is built on.

The Anchors best chance of the half came on 30 mins, excellent pressing from Woodhouse, Hayes and King in the corner caused confusion in Billingham’s ranks and a sloppy pass across the box from Robinson was pounced on by Roberts who struck it well from 10 yards out but over the bar with the goal at his mercy. Roberts was involved again just before halftime when he played a lovely ball through for Lewis King racing forward to shoot from a tight angle but Young was up to the task again and kept the full back’s effort out. HT 0-0 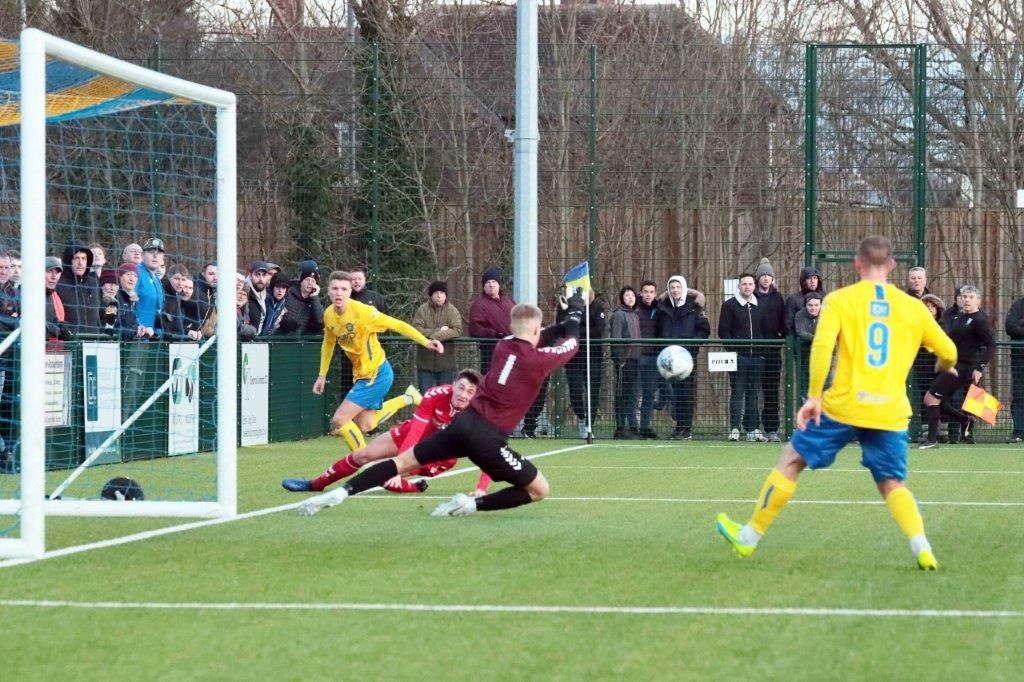 Second half was pretty much the Kev Hayes show, super performances again from everyone, Portas and King especially but Billingham had no answer to the Anchors in form winger, they kicked him, tripped him, doubled up, trebled up, but he found the key to unlock each situation, aided and abetted by King, Bulmer, Woodhouse and Roberts. His first real effort was a lovely curling free kick, after being fouled himself right on the edge of the box by a mesmerised Hogan, which Young acrobatically tipped over.

Pete Bulmer then found himself in a great position free inside the box after Woodhouse had worked it to him across the area, but he tried to be too precise with his shot and Young collected easily as the Anchors ramped up the pace of the game.

Stockton were working the ball well across the pitch trying to find space to attack, McWilliams and Mulligan were involved and again it was Hayes cutting inside onto his left foot to sting Youngs hands as he got down well to his left at the foot of the post with a low drive.

The Anchors continued to press and the reward came on 69 mins, no surprise that HAYES was the scorer. Nicholson’s headed clearance fell to Mulligan who drove forward again, Portas found Hayes and he jinked inside, dragging defenders with him playing a one two with Owens saw the little winger in space inside the box and from a tight angle his chip(cross?)floated over the despairing stretch of the keeper into the far corner to give the Anchors a deserved lead. 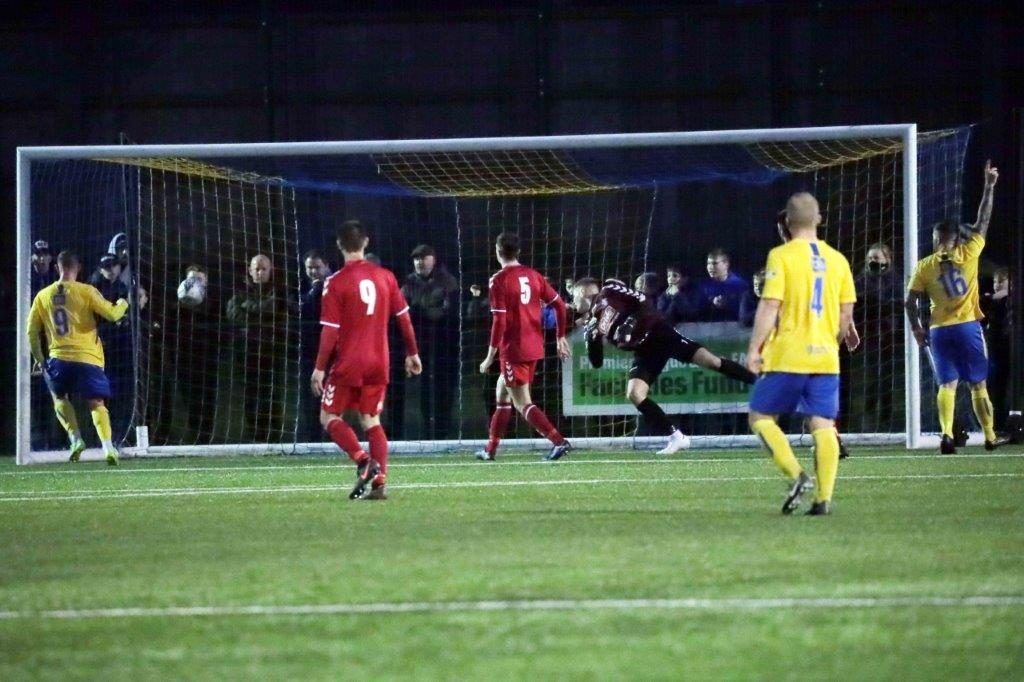 Hayes effort beats the keeper to give the anchors the lead 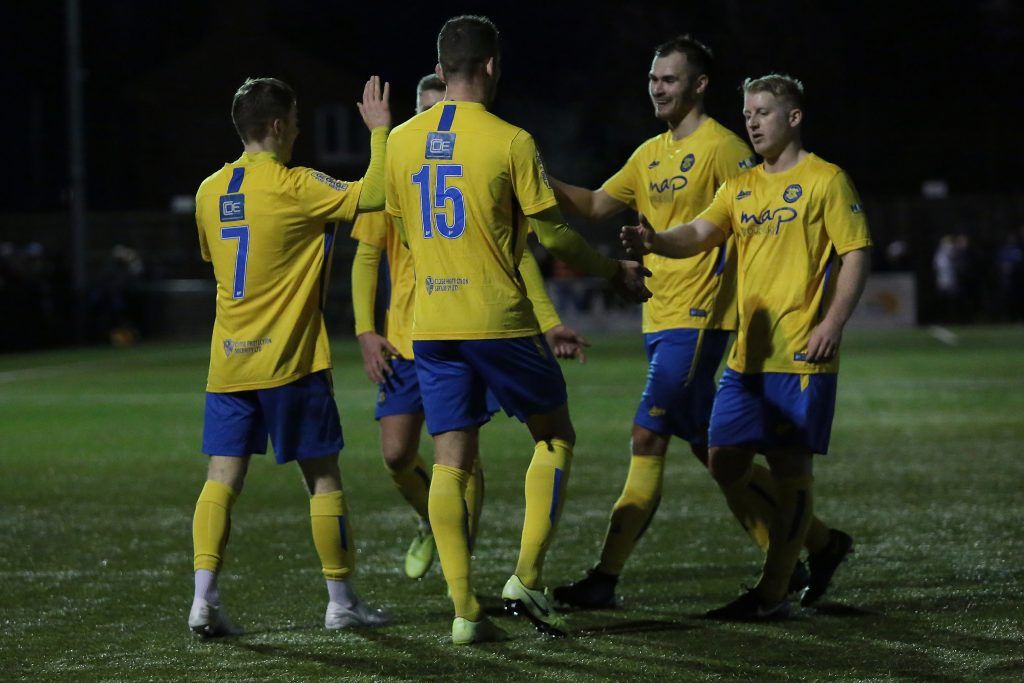 Billingham Town tried to push out to create an equaliser, but generally met with stiff resistance and the Anchors looked to pick them off on the counter with the pace of Risbrough now added to the attack.

It was HAYES again in injury time who received a ball from Owens and instead of running the clock down he attacked the box again, the defender thinking he’d done his job keeping him on his right foot could only watch as the Anchors no 7 shot across the keeper with that right foot into the far corner for his and the teams second goal. FT 2-0 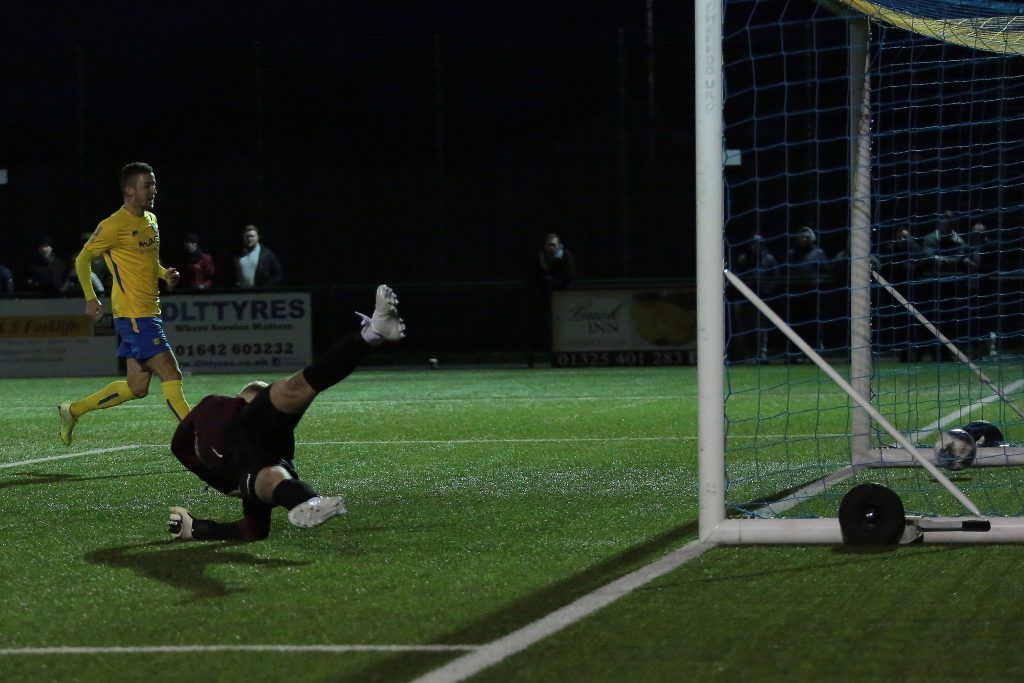 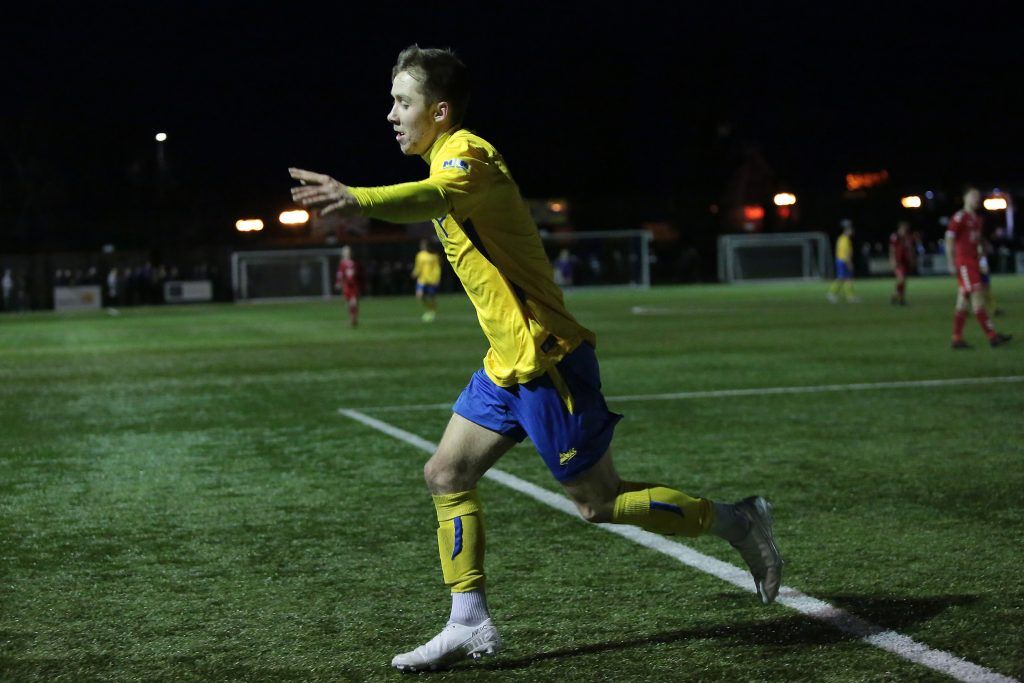 Another hard game negotiated for the Anchors, you always had the feeling Stockton would score at some point and but for some superb stops from 18yr old Brad Young the game would have been comfortable a lot earlier for the league leaders. Hayes takes the deserved plaudits along with the MoM award for a super performance, always a threat and the two goals capped it off, but everyone was on point again, the defence was immense with yet another clean sheet, hardly allowing any scraps for the Billingham forwards to feed off, with keeper Roberts in his usual commanding form if called on. Portas and Mulligan were excellent linking it all up and dictating the pace of the game and the movement and skill of the forwards kept the visitors deep in their own half for long periods.

Taking each game as it comes isn’t easy in practice, but its what the Manager and his team are trying to push home, a Durham Cup visit to Aycliffe midweek followed by a huge game in the Vase last 32 on Saturday with hopefully another massive crowd, is enough to think about the next few days.