Stockton showed their mettle tonight against a very disciplined RCA team. A penalty from Nathan Mulligan and a brave Jordan Robinson header was enough to take the Anchors to the ENL Division 1 summit.

RCA set their stall out very early to press high and close down quickly with a formation that left no space for Stockton to play in and spells of the first half saw a stalemate or resorting to long balls as the Anchors tried to force the game.

The Anchors beat the press on 4 minutes and broke out through Nicholson, the ball came to Jamie Owens who worked a position for a shot but he couldn't get a clean contact and Dean collected it easily, but little else of note for a while as RCA players energetically executed their game plan and when Stockton did break a challenge it usually led to a cynical foul, most of which escaped punishment from the Ref.

RCA had the odd moment too in the first half hour and Davis crashed a shot just over the bar as they caught the Anchors short in defence. A change of wings for Kev Hayes proved fruitful as the little winger became instantly involved as as usual created problems for the opposition.

Setting off on a mazy dribble past two defenders he feigned to shoot with his right foot but dipped left and looking like he'd ran down a blind alley he backheeled the ball in from the bye line and only an intervention from Dean and Preston prevented Mulligan converting it. Hayes had further opportunities the best being when he cut across a left foot drive and sent it just wide from a good position as the Anchors finished the half on top and showed hope for the second period HT 0-0

Again the Stockton team were the aggressors and RCA were putting up a pretty good fight but the complexion changed in the 55th minute when a swift Stockton move found Roberts inside the box being brought down by Hodgson just as he was about to pull the trigger. RCA were raging at the ref about the decision but no VAR and Nathan MULLIGAN stepped up and hammered the penalty into the bottom corner with his usual authority to make it 1-0. 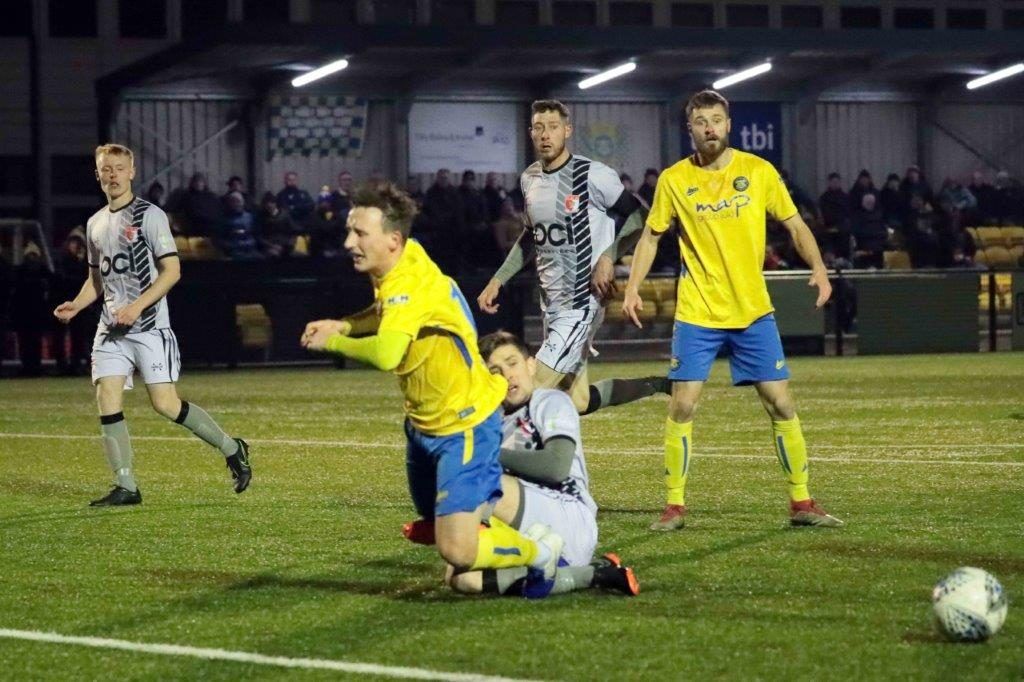 The game opened up a little after that and the Anchors quick passing style started to click in, although there still wasn't a lot of chances, King and Hayes became more involved going forward and Roberts almost doubled the score when his cross was deflected by a desperate lunge by the defender and Dean had to save well just inside the post.

Callum Roberts was called into action on a rare occasion when he superbly tipped over Leonards well hit shot from 25 yards but RCA were feeding on scraps despite their effort.

Nathan Steel came on as sub but had to be replaced just a couple of minutes later after appearing to badly twist his knee, extent not known yet but hopefully not as serious as first looked.

RCA skipper Swansbury almost turned Hayes cross into his own net and then another raid by Hayes brought a good save out of Dean, Craggs swung the resulting corner over to the far post where Nicholson rose above everyone to head back across goal and ROBINSON dived in bravely between the RCA defenders legs to head it home from close range to make it 2-0 on 82 minutes.

RCA had run themselves into the ground keeping Stockton at bay and the Anchors were now flowing and put together several good slick moves which somehow didnt result in further goals in the last 15 minutes. Craggs just missed out when he ran into the box onto a ball from Hayes. Pete Bulmer twice in the last couple of minutes was through in a good position but couldn't find the target with his shots and the game ended 2-0

5 wins on the bounce now and another clean sheet as the Anchors hit form at a busy time. Some tricky away games coming up but if they show the same resilience and effort, they will get chances to win them. Skipper Nicholson took man of the match with Portas and McWilliams not far behind, but another good solid performance from everyone. The team showed again last night they can be patient and work as hard as anyone and then rely on their ability to get the job done in the end.
The Anchors sit top of the ENL Divison 1, they won't rest on their laurels but some from the club can be forgiven if they wallow for a could of days at least in this achievement amongst all the others in the last few years.