A new man in between the sticks tonight with South Shields Ross Coombe covering Callum Roberts suspension and was the only change to the team, Fred Woodhouse was back in the squad for the first time in 3 weeks as we welcomed a good Shildon side to BRW

It turned out to be an entertaining contest with both sides trying to go forward and win the game, although there was a few niggly fouls which the ref didn’t stamp out early on and it threatened to get out of hand in the second half once or twice as Stocktons players got frustrated by it. Another good defensive display this week as the Anchors dug in second half and dealt with the bombardment from Shildon and they created the better chances despite being pinned back for periods.

A lively opening 15 minutes from both sides but without a lot of goal box action. There were several fouls on Stockton players as they broke past challenges and it all looked a little orchestrated but the Referee failed to recognise it and let too much go unpunished. Shildons Matty Robson had the first effort at goal after 7 minutes but it was wide, the same result from Owens five minutes later as he spun in the Shildon box but dragged his left foot shot. Risbrough burst into life after 18 minutes and skipped around Heywood to the bye line but his pull back evaded everyone unfortunately as the Anchors warmed to the task. The closest effort so far came from Shildon’s Lavery who snuck in at the near post and was first to a Craggs corner but his header flashed just wide.

On 25 minutes the Anchors took the lead and it started with Max Craggs moving into space and slipping a lovely ball inbetween the defenders for Risbrough to run onto, he drew a player to him then rolled it to full back McWILLIAMS and his effort took a slight deflection but beat Newbrook low down for his first goal in the Yellow and Blue. 1-0. 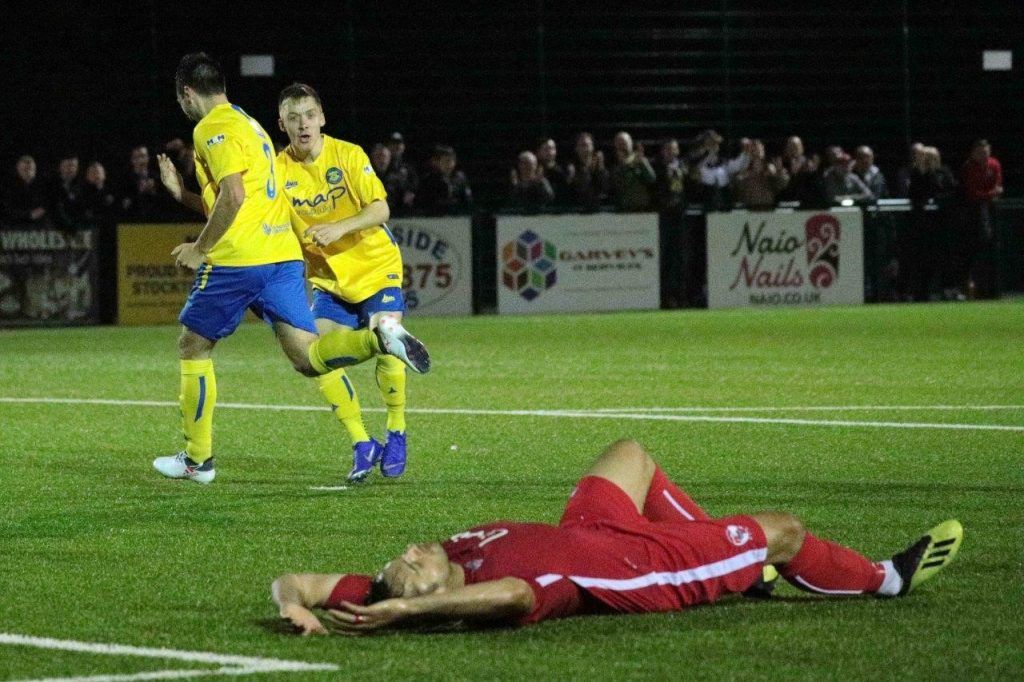 Dan McWilliams wheels away to celebrate after scoring the only goal of the night.

Shildon came close to equalising when good work by Greulich-Smith saw him play in Robson behind the Anchors defence but Coombe came rushing out and saved well at at his feet to avert the danger.

Stockton finished the half on top and after another good break by Risbrough from McWilliams long ball Kev Hayes pulled his right foot effort wide from 18 yards. The usually reliable Nicholson wasted a free header when he got to a 40th minute Hayes corner first but mistimed the effort and it flew wide with the goal at his mercy. The Anchors forced another couple of corners and Mulligan chased down a loose ball and his high cross in looked like it was falling right for Owens but he couldnt get a touch and the chance had gone HT 1-0 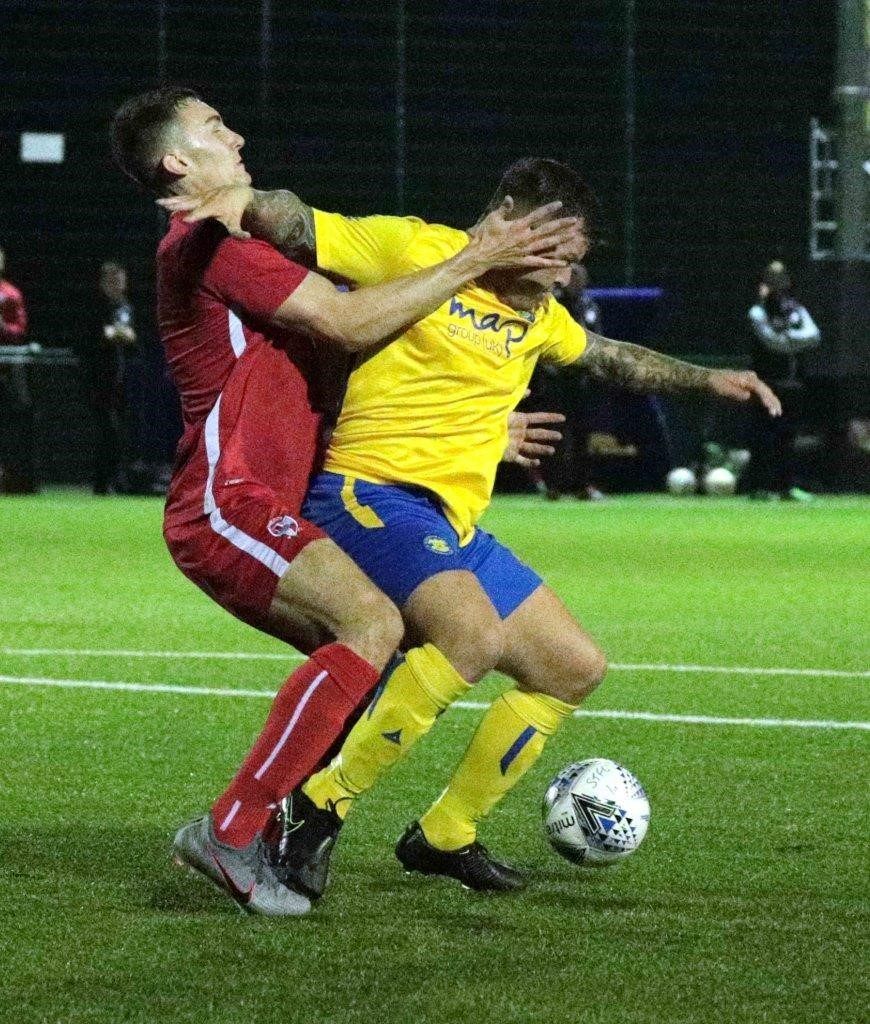 Owens battling away in typical fashion

Shildon showed more purpose second half and took the initiative, although based around high balls into the two big front men. Greulich-Smith had the best chance of the game for the Railwaymen on 60 minutes when he got free from a corner and headed wide from close range, then a few minutes later they worked a good position to find Craggs just inside the box but his shot was blocked well by McWilliams.

McWilliams and Nicholson block the way for Shildons Craggs

James Risbrough pulled off the same brilliant move that lead to the first goal against North Shields and the result could have been the same tonight, letting the ball go through his legs and he spun leaving Heywood for dead and outpaced everyone but this time his low cross wasn’t met by anyone, perhaps he should have been more selfish this time. Kevin Hayes on the other flank, not to be out done, took a pass from King and worked his way into the box, he opted to shoot, but his right foot effort was into the side netting.

Despite having their fair share of the ball Shildon didn’t create a lot of clear opportunities as they were firing in long balls to what became a four man forward line and mostly it was dealt with by the Stockton defence and if not they got to the second ball quickly and cleared and Coombe didn’t really have a shot to deal with. FT 1-0

Another side of the Anchors was on display tonight, just like at Guiseley they produced an excellent all round team performance and ground out a hard fought 3 points. McWiliams got the nod for MoM but King was superb again also and Mulligan worked tirelessly tidying up and making important challenges. Good win, 3 points and a clean sheet to start a new run of them hopefully. Shildon played their part and went away thinking they’d had enough of the ball to have got something from the game. Another huge game on Saturday at home to Consett who have hit form recently.