STOCKTON TOWN failed to repeat their giant killing heroics of the previous round as they crashed out of the Durham Challenge Cup with a 4-0 defeat against Darlington at Blackwell Meadows.

Having seen off Spennymoor in the previous round, hopes were high of another upset but the Anchors couldn’t claim another National League North scalp and found themselves outplayed by a Darlington side that predominantly featured first team talent.

Stockton entered the game without some key names with Tom Coulthard and Fred Woodhouse missing through injury and Kevin Hayes cup-tied having played against the Anchors for Spennymoor in the previous round. Stockton did boast three ex-Quakers among their eleven with Jordan Robinson, Nathan Mulligan and Josh Moody all lining up against their former club.

The Anchors wouldn’t have to wait long before receiving a demonstration of the threat posed by Tommy Wright’s side and they found themselves behind in the games infancy. With just four minutes on the clock, the home side took the lead as a perfectly weighted through ball from Jordan Nicholson fed Harvey Saunders and the young forward finished clinically past Moody to seize the initiative. It wouldn’t be the last time the two would link up. 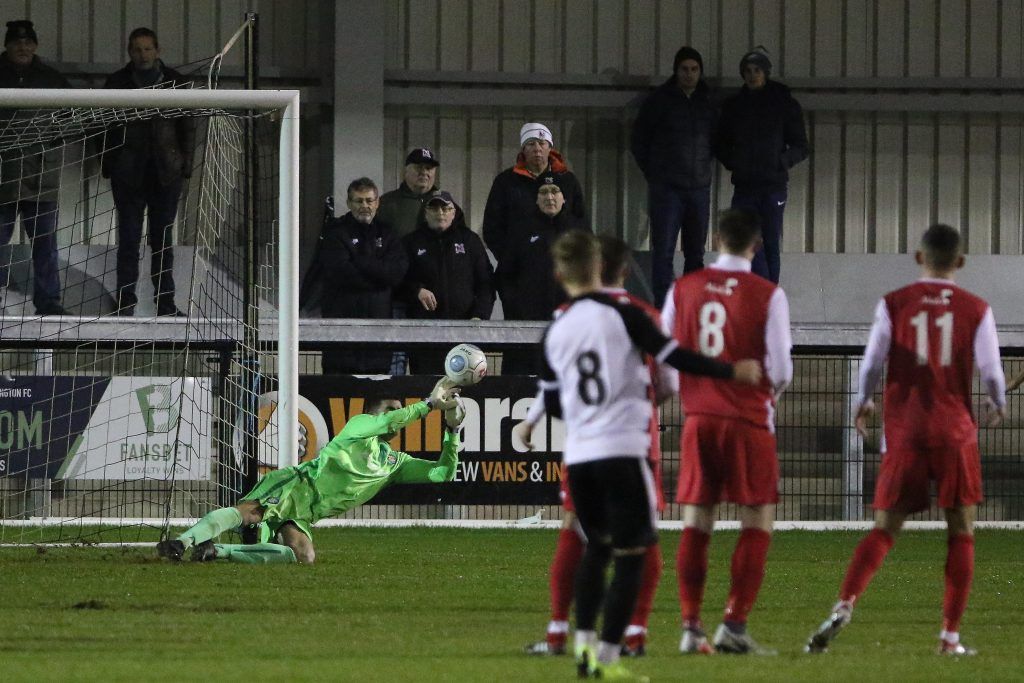 Jonny Maddison denied Stockton with a string of impressive saves.

Stockton responded well to the early disappointment and could have been level ten minutes later. Darlington failed to convincingly clear a Max Craggs free kick and the ball dropped kindly for Peter Bulmer on the right. He pulled it back to the edge of the area and into the path of the onrushing Alan Cossavella but the defender snatched at the chance and Quakers cleared their lines.

Stockton continued to grow into the game and may have felt aggrieved to have a penalty appeal waved away just after the quarter of an hour mark. Mulligan seized possession just outside the area and surged through a crowd of bodies into the box. He went down under the challenge of Terry Galbraith but the officials were unmoved, much to Mulligan’s chagrin. 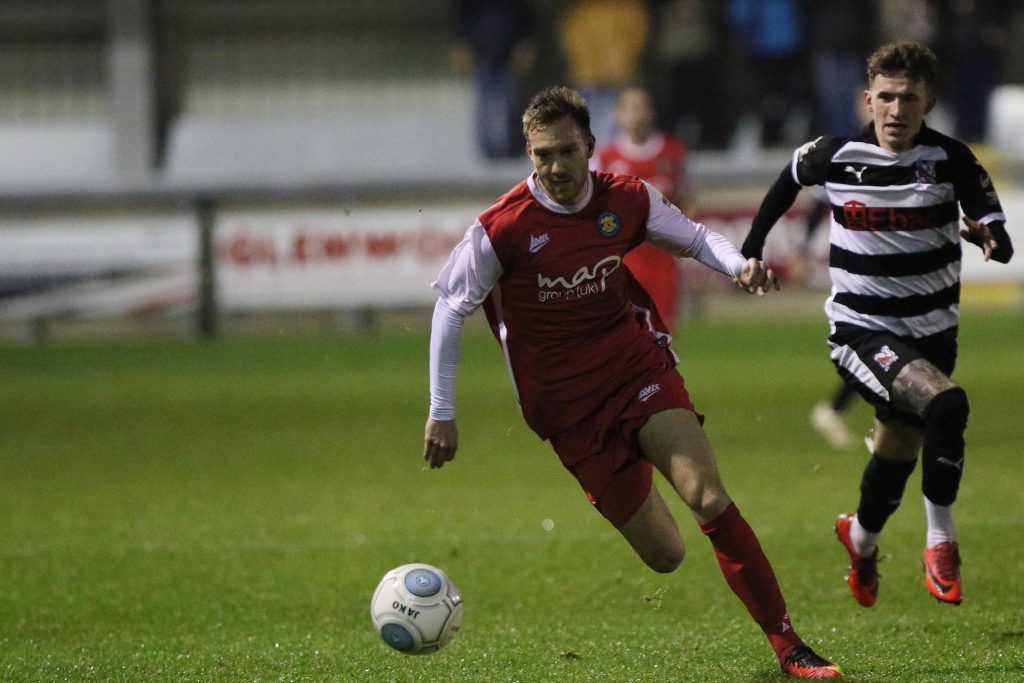 Peter Bulmer went close on a couple of occasions for Stockton.

The home side regained their control on proceedings and built a solid spell of pressure culminating in their second goal on 28 minutes. Nicholson picked up the ball just outside the box and his low right-footed effort beat Moody but cannoned back off his left-hand post into the path of Saunders, who had the simple task of sliding the ball into the empty net to double his and Darlington’s tally.

Stockton would go close to halving the deficit on 37 minutes with their best move of the game. A clever back-heel from Mikey Roberts released James Risbrough down the left. He surged past the impressive Liam Trotman before curling a deep cross to the back post. It was met by the head of James Ward but he failed to keep his header down and the ball rose over Jonny Maddison’s crossbar. 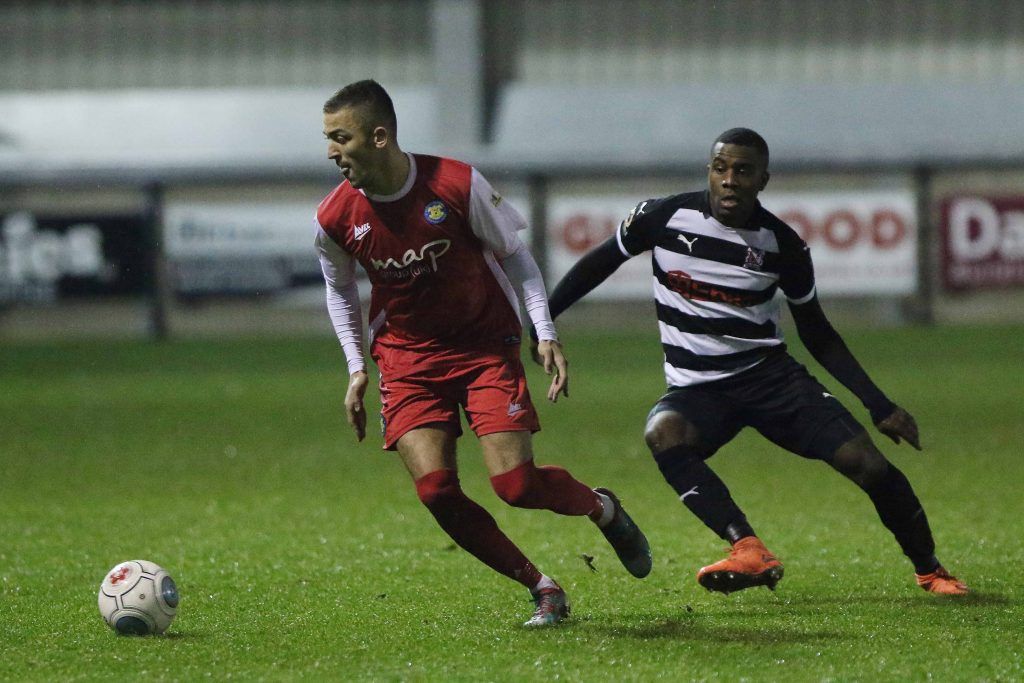 James Risbrough and Liam Trotman fought an intriguing contest down the Stockton left.

Stockton would pay for the missed chance and the game would effectively be put to bed five minutes before the interval as Saunders completed his hat-trick. The Anchors were the architects of their own downfall as Chris Stockton lost possession on the edge of the Darlington box before Quakers launched a sweeping counter attack. For the third time, Nicholson teed up Saunders and the young forward finished emphatically to give Moody no chance and bring up his treble.

The Anchors came out fighting in the second period and were the better side for large parts of the half. They could have got a goal back within a minute of the restart as Ward took aim from outside the area. His rasping effort looked set for the top corner but was clawed away by a sensational Maddison save. It would be the story of the first part of the half. 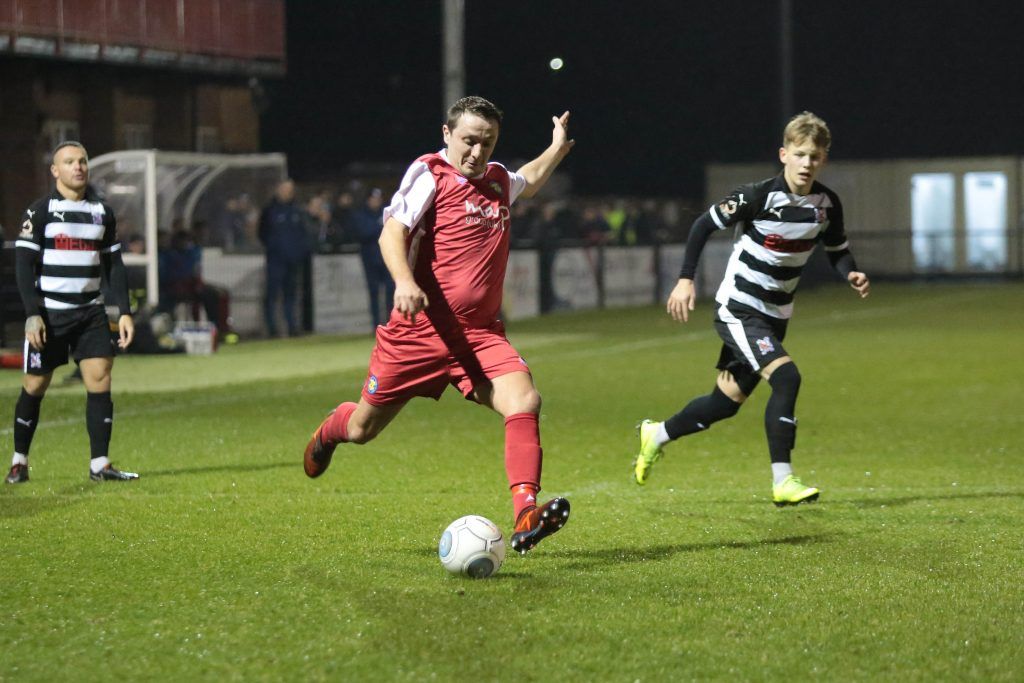 Moments later, Maddison was called into action again and once more he had the answers to the questions Stockton were posing. A clever reverse ball from Bulmer played Roberts in behind Galbraith and he struck low across Maddison but the ‘keeper got down to his right quickly to repel the effort.

There were more heroics from the former Yeovil Town goalkeeper ten minutes after the restart as he pulled off a stunning double save to maintain his side’s clean sheet. Initially, he denied a near post Roberts effort diving low to his right before showing excellent reactions to rise and block a point blank effort from Bulmer on the rebound. The ball then dropped to Stockton, who really should have broken his side’s duck, but he dragged his strike wide of the post. 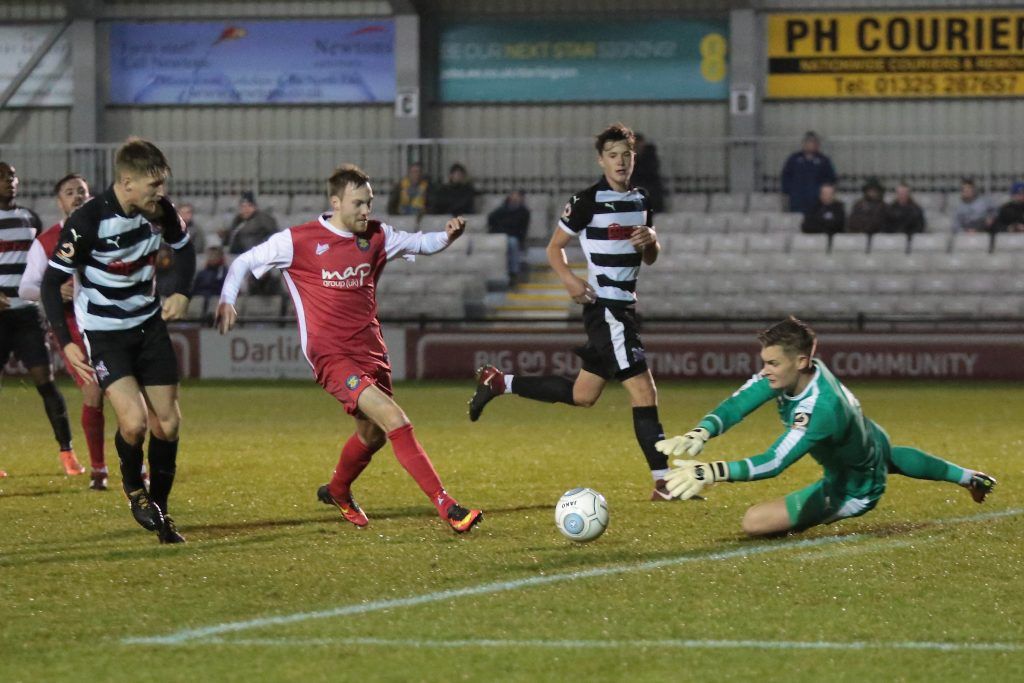 Jonny Maddison made a string of excellent saves to deny Stockton.

It would prove to be a spirited second half display from Michael Dunwell’s side but the goal wouldn’t come for them. If Quakers had dominated the first half, it was a different story in the second as Stockton more than matched their hosts.

Quakers added a further layer of gloss to the scoreline in the closing stages as young forward Brandon Harrison grabbed a fourth for the home side. In the greasy conditions, Moody fumbled Harry Stansfield’s effort from range and the ball dropped kindly to Harrison. The substitute beat the scrambling Moody to the ball and tucked the ball home for a fourth Darlo goal.

A second cup victory over National League North opposition wasn’t to be for Stockton and attention now turns back to Northern League action with Shildon the visitors to the Coverall Stadium on Saturday.