Stockton Town travelled to Gateshead looking to consolidate their position at the top of the Wearside League. 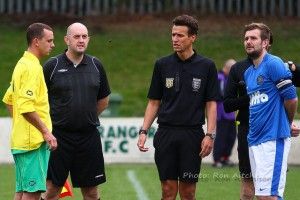 Captain Stav Roberts going through the pre match formalities with the Match Officials.

The game started with neither side creating any chances and it took a highly disputed free kick award to bring the game to life. Up stepped Kallum Hannah to curl a free kick round the wall and into the bottom corner on 22 minutes. This was quickly followed by Stockton’s second. after a quick passing move down the left the ball was delivered into the box for Stav Roberts to turn home. 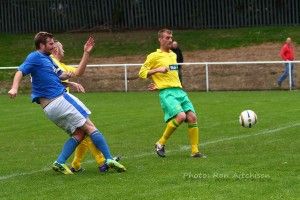 Tony Johnson was then on hand to grab Stockton’s 3rd on the stroke of half time when he scrambled the ball home at the second attempt on 44 minutes.

The second half saw a midfield battle develop with Stockton comfortably seeing the game out. Under 18 Sonni Coleman came on for his second appearance in the 1st team.