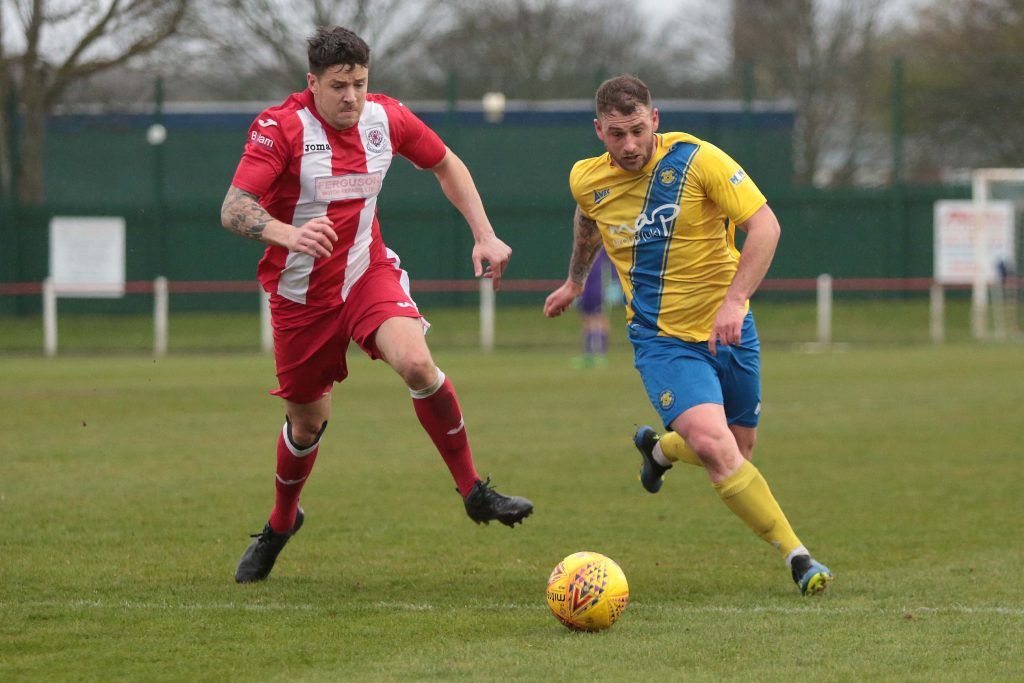 It was Deja Vu for the Anchors at Seaham Town Park this afternoon with Red Star coming from behind and Gillesphey scoring a last minute winner exactly as he’d done earlier in the season at the Coverall although an abject display of finishing combined with some brilliant goalkeeping from Seaham’s Chris Bannon left Stockton clinging onto 6th place in the table when top 4 looked more likely just a month ago. Fred Woodhouse was restored to the starting line up in place of Shabs Mohammed.

The Anchors started slightly the better side although it was all pretty scrappy in the early stages, Kev hayes struck the first meaningful effort as he cut in onto his trusty left but as he shot the ball bobbled and it sailed over the bar. A long ball up to Chilton saw his flick on find Gardiner but he snatched at his effort from the edge of the box and dragged it wide.

Stockton were building nicely, Craggs and Woodhouse were getting in between Red Stars lines and causing problems. The Chris Bannon show started on 15 minutes when he blocked a point blank range from Roberts as the striker was slipped in by Robinson, the ball fell to Woodhouse and his follow up was deflected for a corner. An even bigger scramble ensued from Craggs ball in as Bannon touched it away and Nicholson at the far post saw his shot blocked on the line by Hailes, Coulthard latched onto the rebound but Red Star had players in the way and Robinson had a go too but there was no way past the massed ranks. 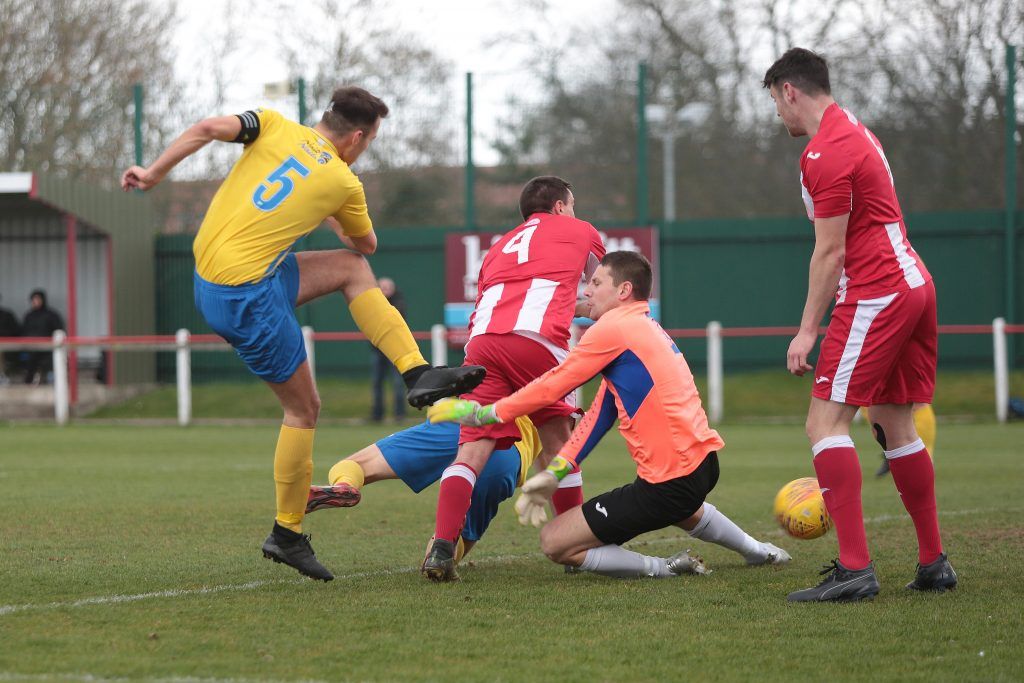 The Anchors took a deserved lead on 18 minutes when a positive run by Risbrough saw him get to the bye line and fire it across, Bannon made a great save to block Roberts effort and then the follow up but the loose ball found WOODHOUSE a yard out and he tapped into the empty net 1-0. 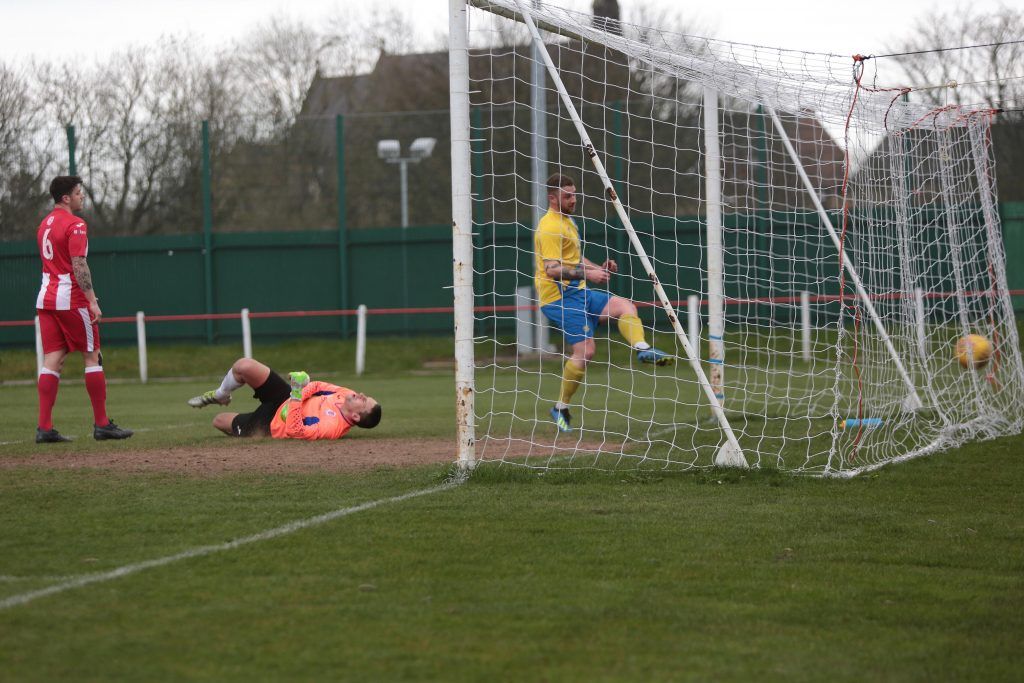 Fred doesn’t miss from there…. Woodhouse converts to make it 1-0

Stockton were now in the ascendency and both full backs were getting forward, Jimmy Ward linked with Roberts and curled one just past the far post. Then Pete Bulmer played a one two with Hayes and found himself one on one with the indomitable Bannon who pushed away Bulmers shot.

One way traffic now and Bannon trying to clear a poor back pass was beaten to the ball by Roberts who pulled it back for Woodhouse, Bannon managed to divert the ball away but Hayes picked it up and whipped in a cross, Roberts met it near post with a firm head but Bannon was equal to it and he tipped it away for a corner. 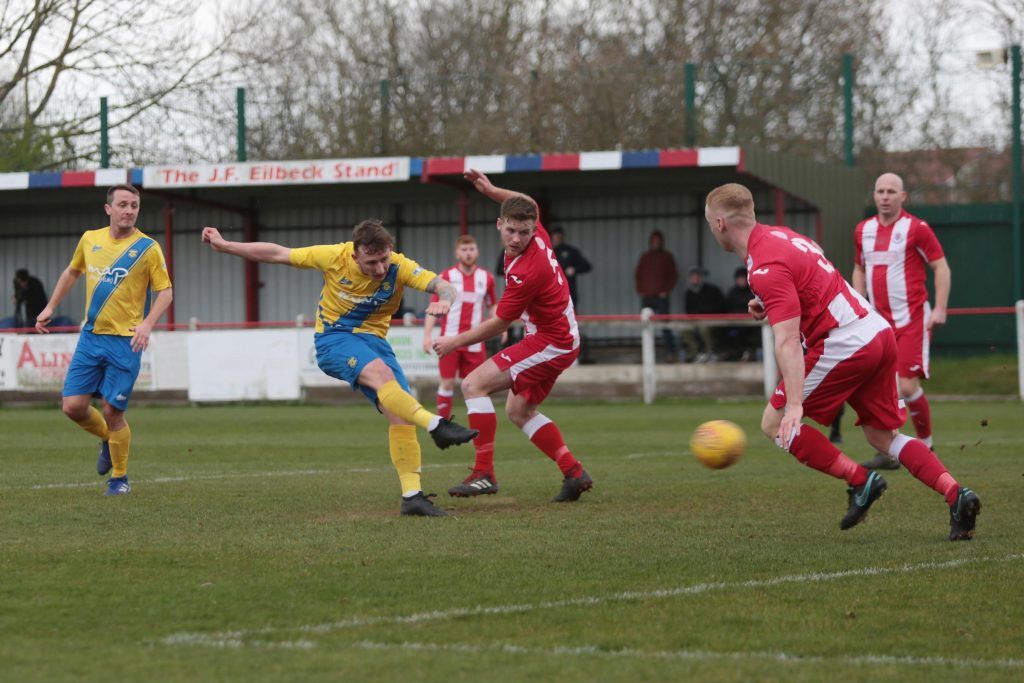 Mikey Roberts had no luck today despite several efforts on goal

There was a feeling that the Anchors would rue those chances and that would be proved correct, Red Star issued a warning just before half time as Stockton took their foot off a little and Hailes was allowed far too much room to fire a cross field ball to the unmarked Gardiner and his pullback was steered wide by Chilton. It was veteran striker Chilton who brought a good save from Arthur just a minute later as Stockton seemed to be having a breather. There was still time for one more excellent stop from Bannon who diving full length tipped round the post a bottom corner bound 25 yard drive from Max Craggs right on half time (HT 0-1)

The threat Red Star had showed in the closing minutes of the first half was real and just over a minute into the second half Marc Lancaster was allowed to carry the ball a long way down the line without a challenge and he passed it into Dan WILSON, the imposing striker held off Coulthard and turned into the box firing in a shot which Arthur could only get a hand to as it found the net 1-1.

The Anchors didn’t panic and they were still creating opportunities. On 51 minutes Mikey Roberts latched onto a ball and with Bannon out of position he could only find the man on the line who blocked it for a corner.

The Anchors lead was restored on 58mins. Peter Bulmer made a good incisive run and as he turned inside the full back he found the willing WOODHOUSE who transferred the ball onto his left foot and curled one low into the bottom corner. Bannon with no answer this time. 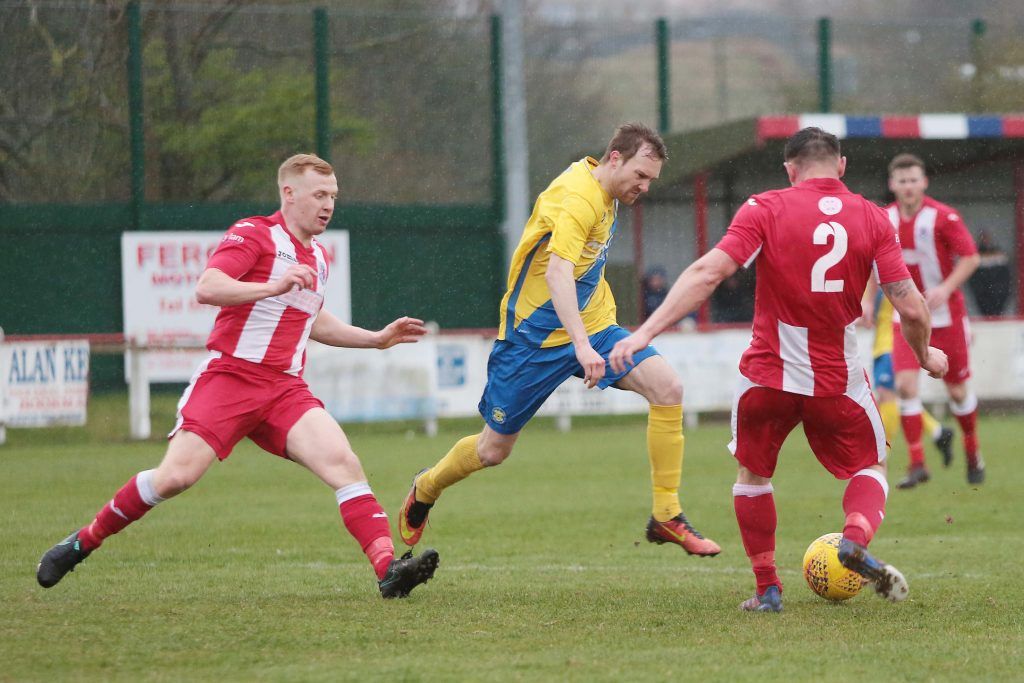 Stockton survived a scare a minute late after Arthur slipped on the now greasy surface as he was about to clear a back pass and the ball went straight to Wilson. But the Anchors stopper managed to save Wilson’s effort and redeem himself. 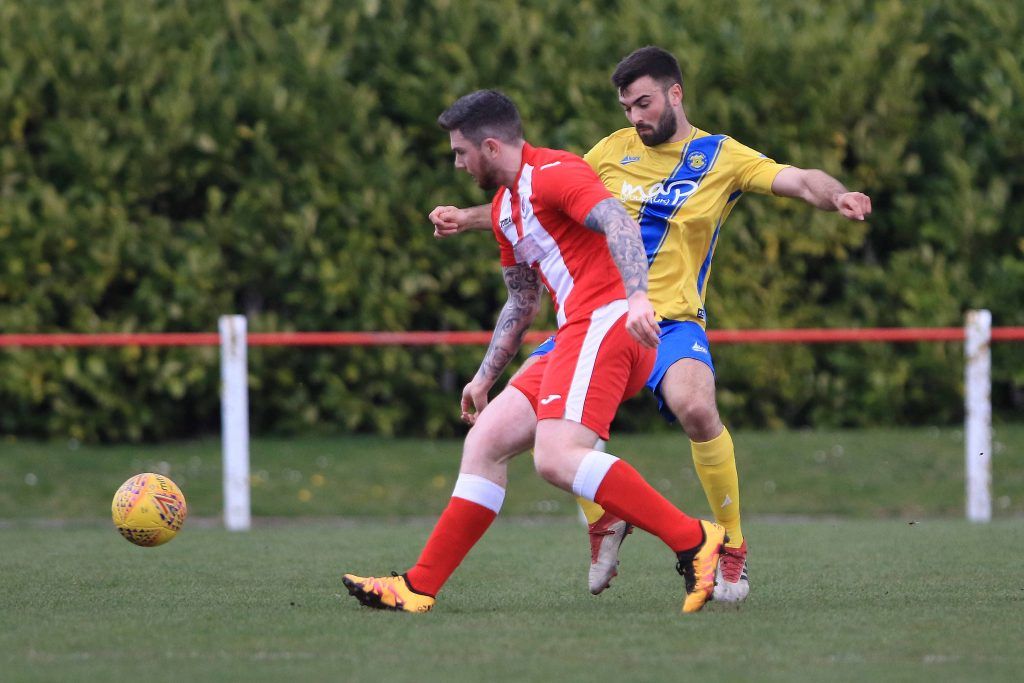 Dan Wilson was a real handful for Stocktons defenders today

Kev Hayes missed a great opportunity to give the Anchors some breathing space on 61 minutes. Risbrough linked well with Roberts who worked his way into the box past defenders, as Bannon came out to head him off Roberts touched the ball past him, the keepers challenge floored Roberts but the ref played an advantage as the ball fell to the Stockton winger, he took aim but curled it past the post with just a couple of Red Star defenders on the line to beat.

Red Star seemed to get some belief from that and they almost levelled it straight afterwards but Gardiner strike was wide from Chiltons cross. 3 minutes later they were level and it was the strong play of striker Dan Wilson again, drawing the foul from Coulthard as he took him on in the box, seemingly going wide the Anchors defender made what looked like minimal contact to knock over a guy of that size but the Ref pointed to the spot and Michael CHILTON sent Arthur the wrong way. 2-2 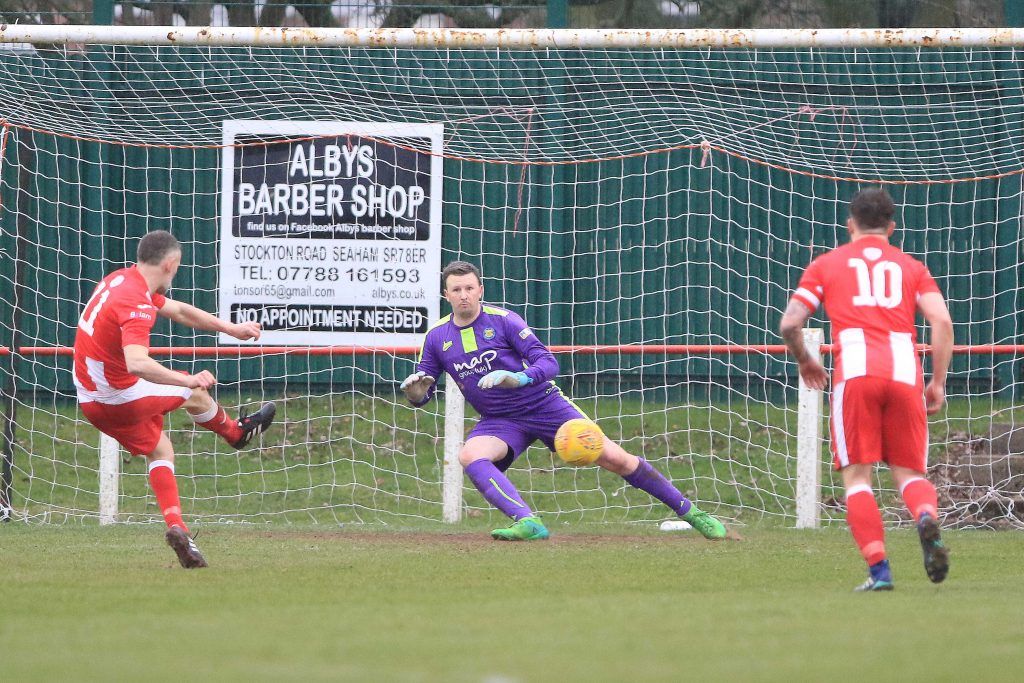 It was now anyones game as the rain became heavier and made the hard surface treacherous for anyone trying to take more than one touch.

James Risbrough latched onto a ball at the far post and his volleyed effort was headed off the line, again. Red Star smelled blood and Wilson again caused problems with his strength turned and struck a great effort which was tipped over by Arthur. Luckily the Ref didn’t fall for Wilsons less convincing dive on 87 minutes but as it looked like a point each, Red Star broke from a Craggs corner which went straight to Bannon and with a few Stockton players failing to see the urgency of getting back they found themselves outnumbered in the box, firstly Greenwood fired in a low shot which Arthur parried well and as the defence turned round full back Lancaster popped up in the box and crashed a shot goalwards Arthur made a superb save but it looped up to Luke GILLESPHEY 10 yards out and unmarked to head it back into the unguarded net on 90. FT 3-2

Three (3-2) defeats in 7 days is extremely disappointing, but unlike the other two, this was a game the Anchors should have had won by half time, similar to Ryhope a few weeks ago they failed to put the opposition to bed and that encouraged them to keep going. It must be a little exasperating for all concerned especially seeing 17 points dropped this season to the bottom 6. The Manager hasn’t got a lot of choice in the squad to change things much but you could say that it was just bad luck and good goalkeeping. Theres two very difficult games left to complete the season which is in danger of unravelling, and that might suit the Anchors more and concentrate their minds.