Stockton travelled to Penrith this afternoon and took a healthy following with them, but unfortunately it couldnt inspire them to take the 3 points and it ended disappointingly with Penrith deservedly taking the victory.Penrith are a much different proposition than our previous meeting and their direct aggressive style on a tight pitch is the exact one that causes the Anchors most problems, it was no different today.

Jordan Robinson was unavailable today so Tom Coulthard moved across to centre half and James Risbrough was back in the starting 11 with Sonni Coleman replacing Mikey Roberts.

The scrappy start suited Penrith and set the tone as they won the 50/50 balls and put the Anchors back four under pressure as the Stockton players tried to take touches on the bobbly surface. Moynan in midfield was snapping into challenges and it was the bonnyblues who had the first real effort when Clarke got the better of Ward and cut inside his left foot shot just curled wide of the far post. Just two minutes later captain Davidson rose unmarked at the far post to a corner but headed wide.

Sonni Coleman latched on to a mistake in the Penrith defence but his attempt to nick the ball past the onrushing Dixon got caught up in the Keepers legs and he collected it.

It was Stocktons keeper Moody who was next in action as he had to get down quickly to his right to superbly save a shot from Coleman from just inside the box after good work from Main and Hebson.

The Anchors best move of the half on 30 minutes saw Kev Hayes jink inside of two Penrith defenders and roll it to Bulmer who as he rolled it out of his feet to shoot appeared to be tripped, the Ref only a couple of yards away disagreed unfortunately even though it looked nailed on.

The Anchors took an unlikely lead on 40 minutes when Max CRAGGS curled a lovely 20 yard free kick into the top right hand corner giving Dixon no chance and it looked like they would get away with a lack lustre First Half performance but almost immediately Penrith levelled it when a clearance was charged down and once again the Anchors defence was stretched and fullback Eleftheriadis run into the free space on the right and with plenty of time delivered a pinpoint cross which found Coleman stealing in between defenders to head home neatly. HT 1-1 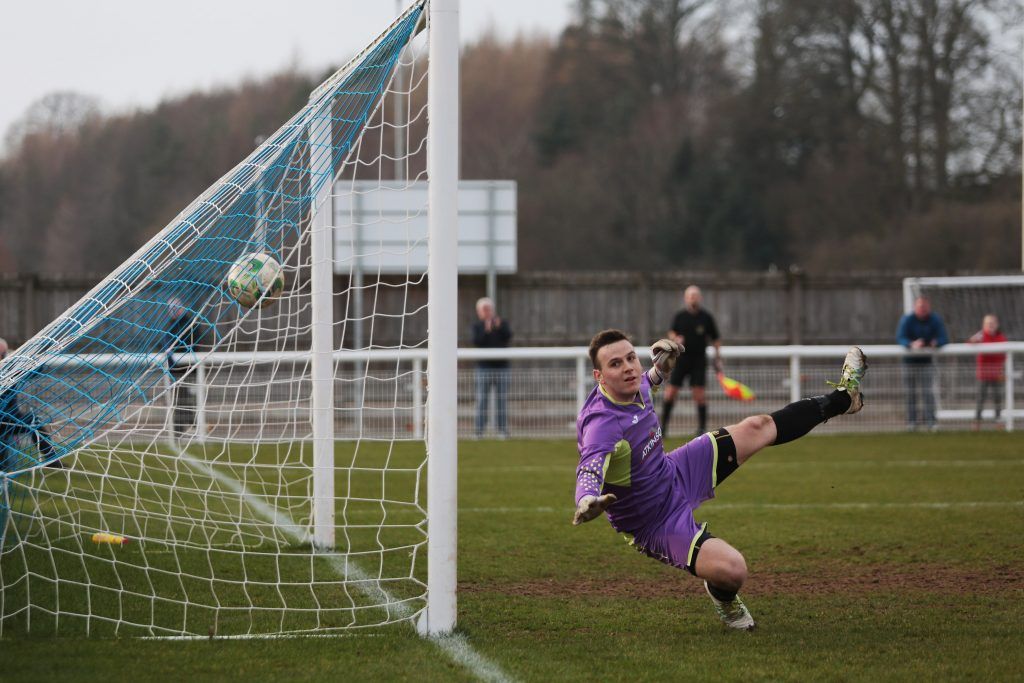 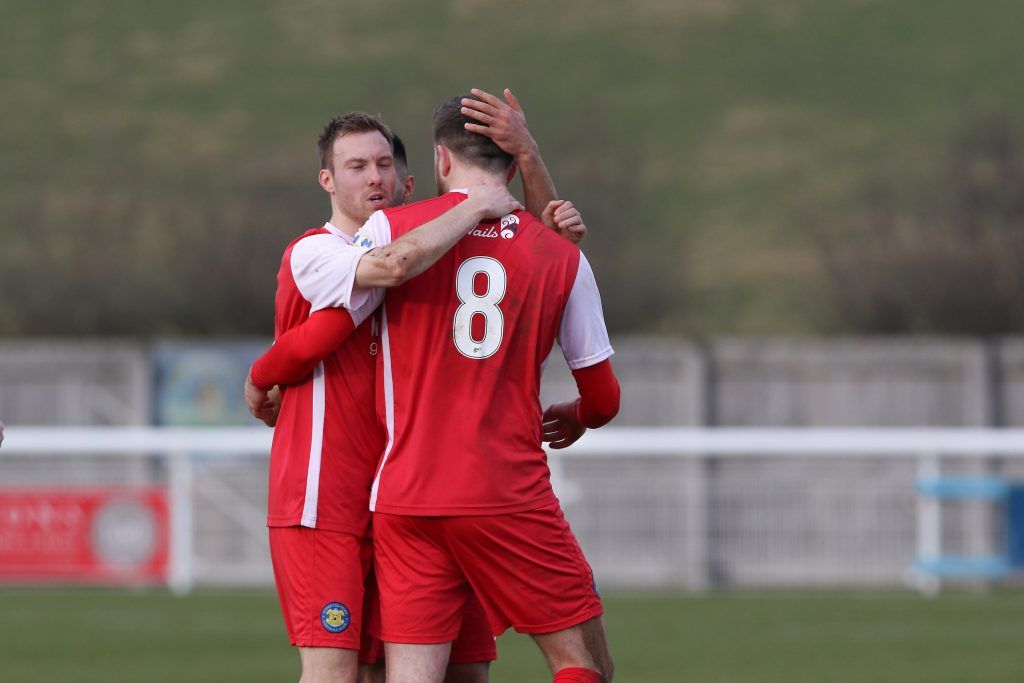 Max Craggs is congratulated by Peter Bulmer after scoring.

Coleman almost gave Penrith the lead in the first minute of the second half, allowed to turn and shoot from a tight angle Josh Moody instinctively thrust his hand at a shot he didn’t expect to see and the ball ricocheted off the bar to safety.They didn’t have long to wait though and again with time to get his head up full back Eleftheriadis delivered a long ball that got through to Max BROWN who turned Bulmer and slotted home on 53 minutes.

Stockton made some changes and eventually started to push Penrith back but with something to hang onto they defended for their lives. Craggs free kick was charged down and the looping ball in saw Mulligan head goalwards, Dixon back peddled and managed to tip it onto the bar and over. As the Penrith foul count mounted, Craggs with yet another free kick fired just over again from 25 yards. 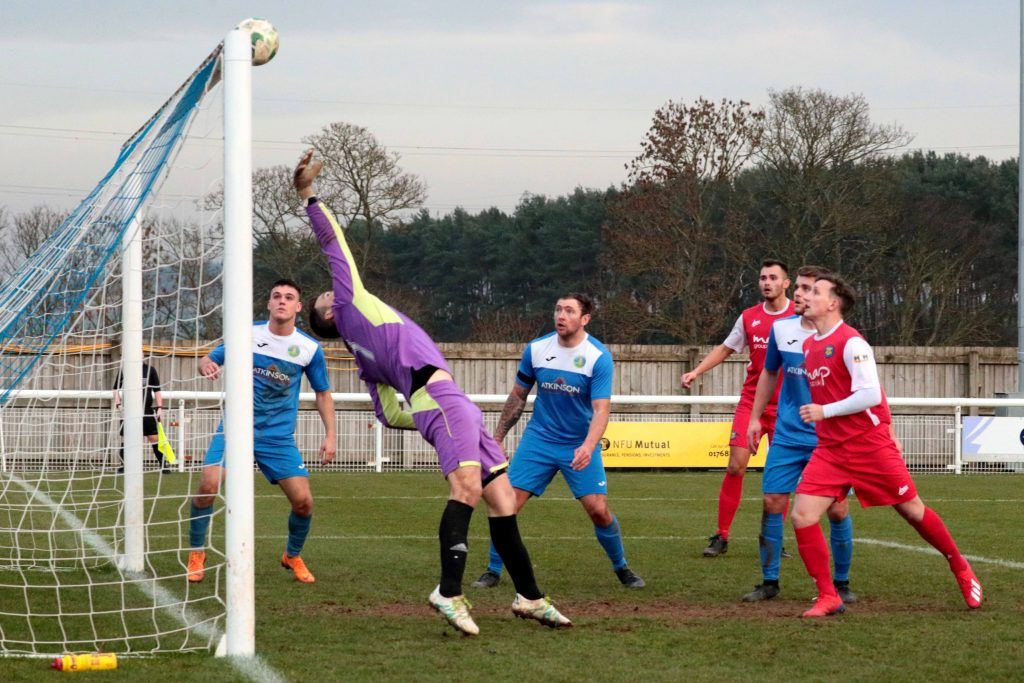 Sub Chris Stockton shrugged off a challenge and his right foot shot was rising just too much to find the net, and when Craggs latched onto a clearance from his own corner and fired it back in Penriths defender Clarke stuck out a leg and somehow the deflection from a few yards out flew over the bar. Obviously it wasn’t going to be the Anchors day….. 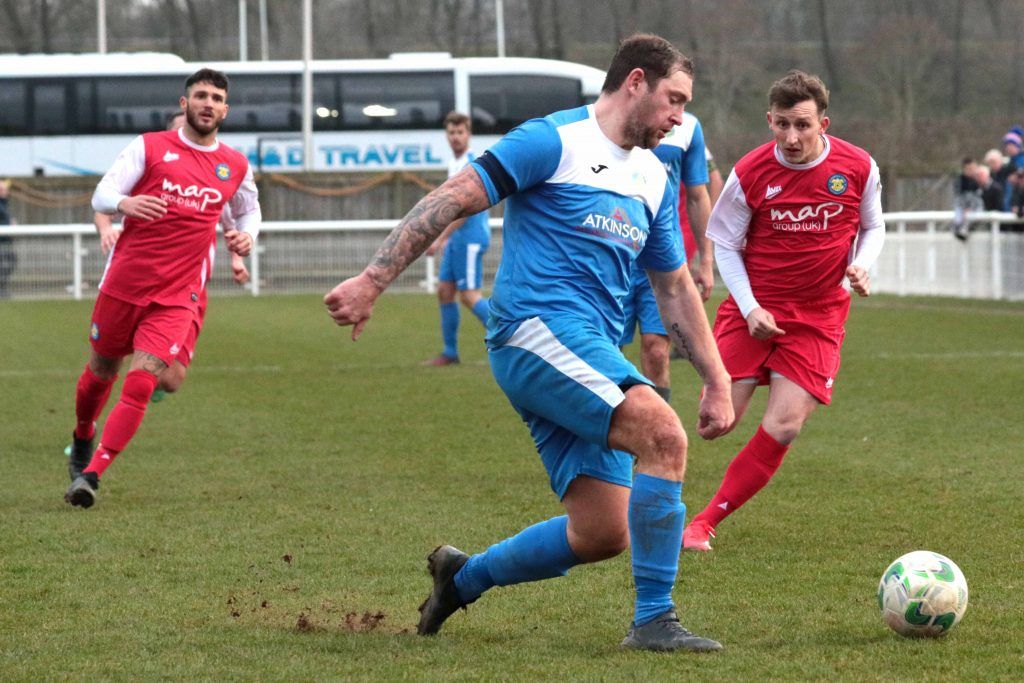 Penrith skipper Grant Davidson was immense at the heart of their defence.

That was confirmed on 83 minutes when sub Shaun GARDENER, with his first touch, latched onto hesitation by Bulmer who was over ran again and slotted home neatly. That took the wind out of the Anchors sails and despite 6 minutes of injury time they couldn’t find a goal.
FT 3-1

Very disappointing for the manager and players and I’m sure the large Stockton following. Not the first time recently the team has struggled against a physical team who were determined not to let you play football on your terms the surface that wasn’t perfect but Penrith aren’t as bad as their record shows. This was only their second victory of the season and we need to be more convincing in this type of match, out fought, out muscled and out manoeuvred unfortunately.