Anchors slip up at home to a determined Red Star

A disappointing end to the winning run as an unusually lethargic looking Anchors, after leading 3-2 for most of the second half, conceded two late goals. Red Star just about deserved the 3 points for their second half performance that belied their lowly league position.

Michael Dunwell selected the same starting 11 today with Liam Jordan keeping his place between the posts. There was a two minute silence before kick off, Impeccably observed.

The opening 10 minutes were of little note tbh and this seemed to set the tone for the Anchors all afternoon. With 14 minutes on the clock, Pete Bulmer was fouled not for the last time and from an awkward position Max Craggs produced a great ball for Skipper Adam Nicholson to head back across goal to give Fred WOODHOUSE the simplest of tap ins. The flurry of exciment continued two minutes later as for the second week running the Anchors seemed to stand and watch as a Seaham corner taken by Weirs was headed home by Dan WILSON from 6 yards out to make it 1-1. The Anchors midfield seemed to struggle to get to grips with Seahams formation and Red Star were getting into situations around the box where they outnumbered Stocktons defenders. Gillesphey was allowed to carry the ball from inside his own half and let go a powerful shot from 30 yards which Liam Jordan saved well low down to his right. The game was now more open, most of the quality was coming from the Anchors but Seaham’s physical direct approach was unsettling them. Risbroughs cross was deflected out for a corner which keeper Wilson had to punch clear from under his bar. Next Mulligan slid in Woodhouse down the channel and his pullback was somehow turned over the bar from Roberts under challenge from Myers. But it was Red Star who went in front on 35 minutes when an attack which seemed to have petered out sparked back to life as when the ball rolled across the box Jordan and Garbutt misjudged it between them and allowed Wilson to turn and find CHILTON who finished easily. The Anchors responded well and a forward ball from Nicholson put Roberts in on goal but the ball wouldn’t come down quickly enough for the striker as he raced into the box but he managed to squeeze an effort underneath the Red Star keeper only to see it hit the post and roll to safety. Right on the stroke of half time the Anchors drew level as Pete Bulmer latched onto some sloppy defending and got to the byline, his low cross was turned into the empty net by Chris STOCKTON 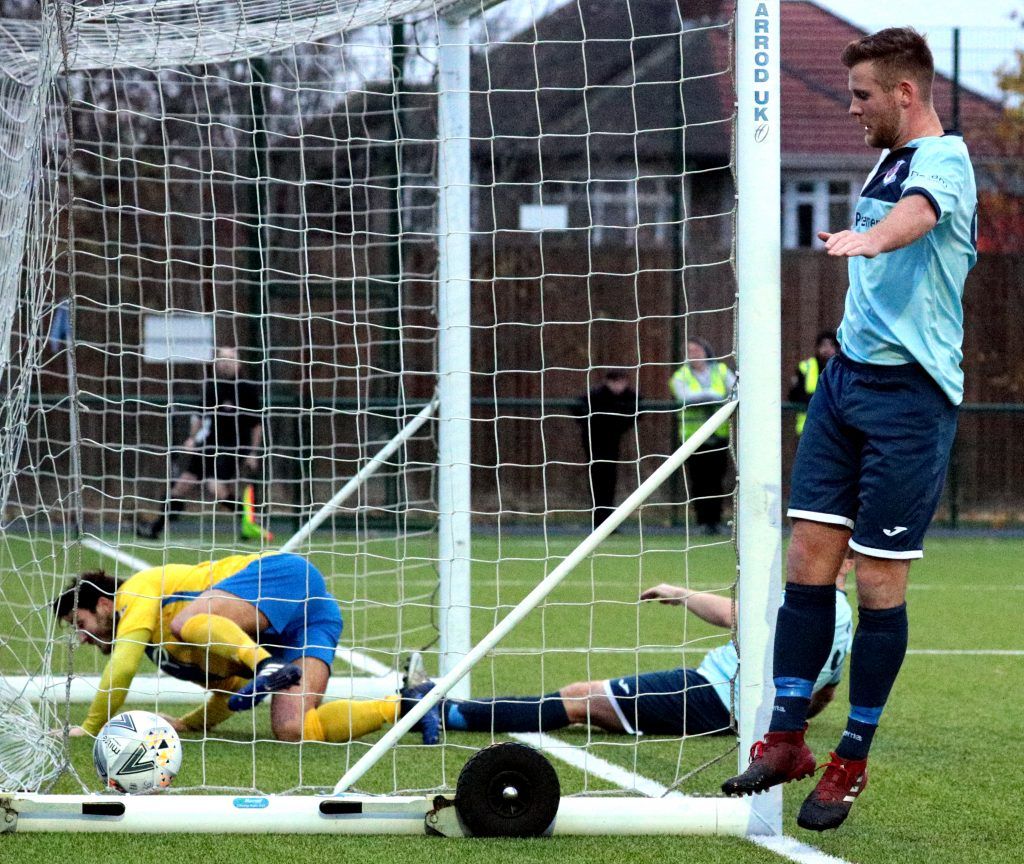 Stockton regained their lead 3 minutes into the second half when another foul on Roberts resulted in a similar setup to the first goal with a Craggs free kick headed down by Nicholson to Roberts whose shot from 16 yards was blocked by the arms of Myers and the Referee pointed to the spot, Nathan MULLIGAN sending Wilson the wrong way with a powerful effort.

Red Star worked even harder to get back in the game forcing a succession of corners and free kicks, eventually their pressing paid off when after Tom Coulthards last ditch tackle conceded a free kick 20 yards out CHILTON confidently curled it up and over the wall into the right hand top corner giving Jordan no chance. If anyone expected Seaham to be satisfied with a point they were mistaken as they could smell the win, they continued to impose themselves on a lacklustre Anchors who just couldn’t get any control on the game. Red Star’s winner came in the 82nd minute as from yet another corner Liam GILLESPHEY rose highest at the far post to head home. Town pushed hard to salvage a point but it was to no avail as Red Star stood firm and saw it out.

Red Stars physical edge and direct style unsettled the Anchors at times and they never got anything consistent flowing today, for a team in the bottom 3 Seaham had a good spirit and worked very hard, many teams would perhaps have given up after going down 3-2 so huge credit to them for a deserved victory, they certainly didn’t look like a side who belonged in the position they occupy at the moment.

A bit of a setback considering the form of the last month and definitely not ideal preparation for the Anchors visit to the unbeaten Dunston next week, but hopefully a wake up call for everyone as to how tough this League is and how the level of performance needs to be maintained at all times, work to do this week on the training pitch.