ANCHORS THROW IT AWAY

The game started at a nice quick pace and there was plenty of action in the early stages. Nathan Mulligan latched onto a poor clearance but didn’t quite catch his volley and although on target Pickford collected it comfortably. Next Mikey Roberts found himself free in the box but his strike was again straight down the throat of the keeper.

A minute later it was Aycliffe with a good chance to open the scoring. Costello won the aerial battle from a free kick lofted in and Kurt Matthews left foot volley was a clean strike but flashed over the bar.

Still inside the first 10 minute Max Craggs fired in a terrific dipping powerful free kick but Aycliffe keeper Pickford made an excellent save high to his right tipping it for a corner with one hand. 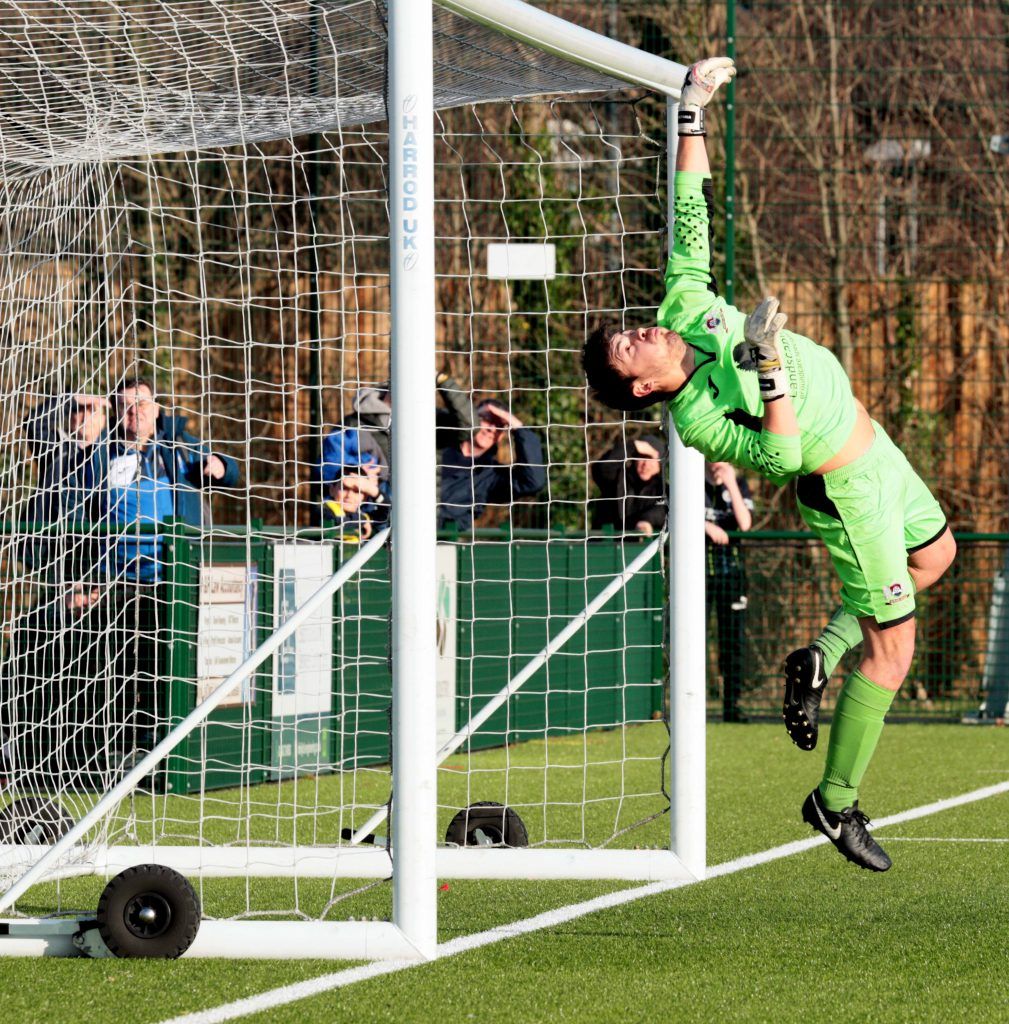 Aycliffe looked lively but Stockton were controlling the ball better and working it around. A nice move across the pitch saw first Roberts then Hayes have shots charged down and the ball fell to Jimmy Ward who suddenly appeared on the right hand side of the box but he couldn’t get any real power behind his effort and Pickford saved again easily.

Nathan Mulligan was linking the play nicely and he found Bulmer on the left who took on the full back and sent in the cross toward Mikey Roberts who’s run to the near post got him in front of the defender but his flicked header scraped past the far post.

It was fitting that the best move of the half led to the opening goal, it had been coming for the Anchors and it was neat play down the right saw Hayes pick the ball up and reverse a pass down the line to Roberts who pulled it back to Nathan MULLIGAN running into the box to finish low down to the keepers right on 42 minutes. 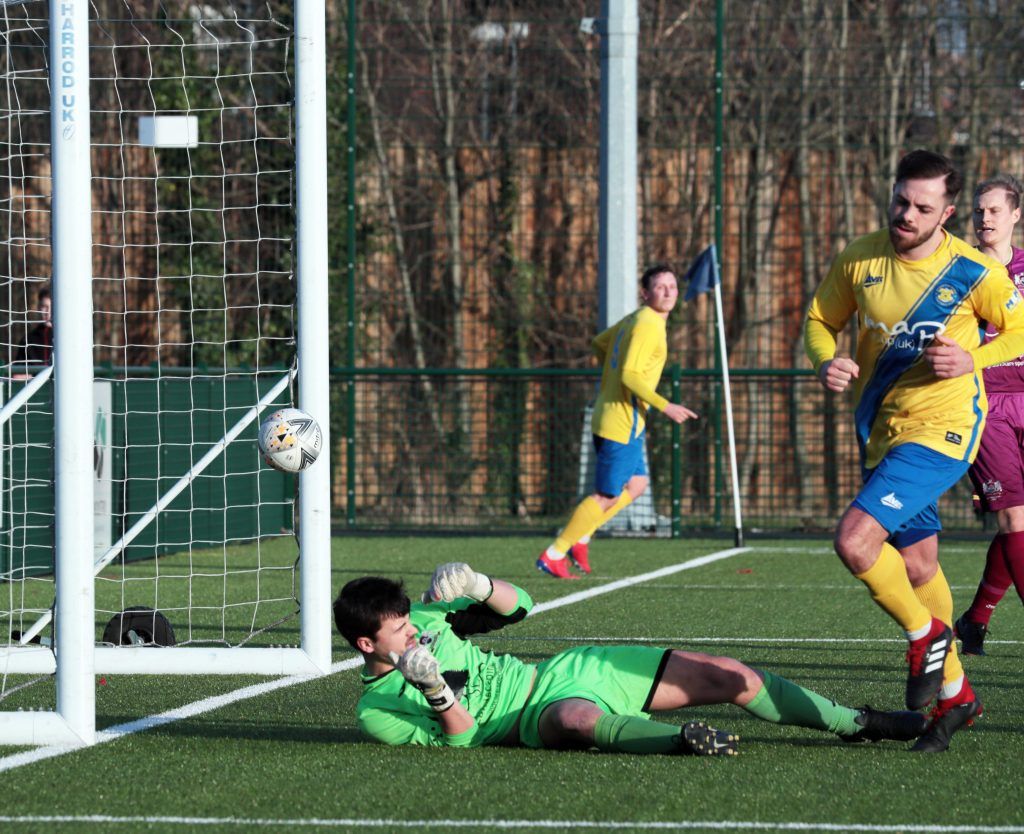 [Nathan Mulligan wheels away after opening the scoring.]
Shortly after that with the Anchors now well on top Max Craggs with his back to goal rolled it to his left and Mikey Roberts blazed it over the bar from 8 yards out when it seemed easier to score.
HT 1-0

The second half started with a nasty injury to Aycliffe’s Marc Costello who took a volley from Max Craggs full in the face which knocked him unconscious. After some treatment he was stretchered off and was looking a lot better but sent off to A and E as a precaution. Post match information is that he’s fine and on the mend now.

Aycliffe striker Richardson hit the bar with a looping header to show they still meant business but the Anchors still looked the most likely. After missing what looked like a more simple chance from 10 yards out Adam NICHOLSON made amends and looked to have secured the points for Stockton with a header at the far post from Craggs corner on 66 mins. 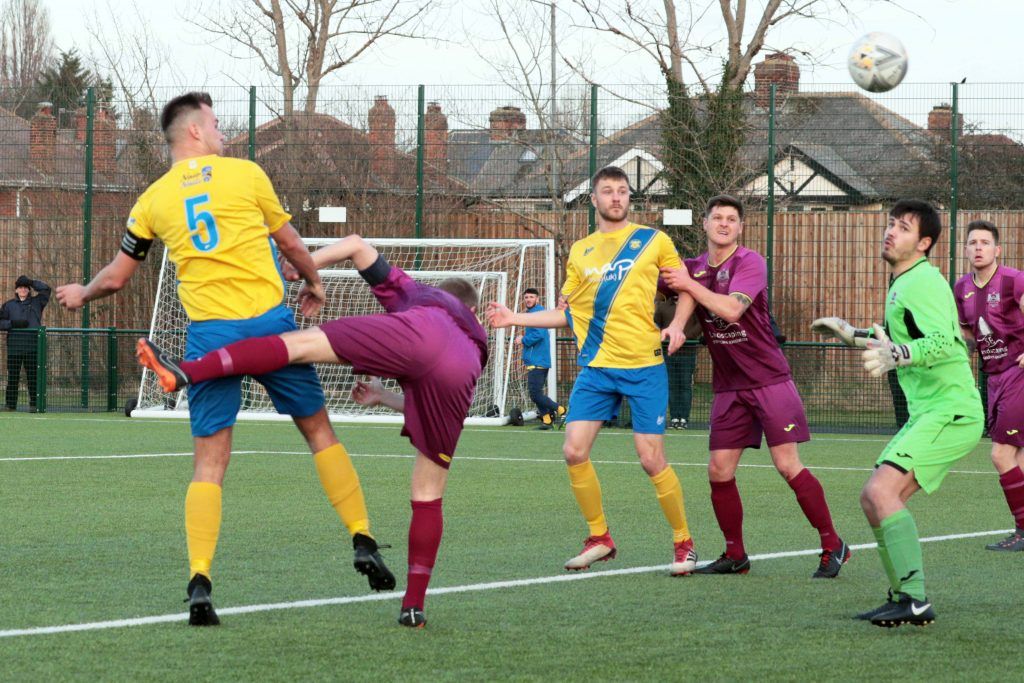 Aycliffe had other ideas and took advantage of some sloppy defending on 73 minutes when Kurt MATTHEWS scrambled the ball home after it seemed the danger had been snuffed out, the ball was allowed to come back into the box.
Stockton lost their way and the momentum shifted. Aycliffe started to push and the Anchors defenders were being asked questions. An equaliser looked on the cards and when Josh Moody made a superb one handed save low down the resulting corner was cleared and the ball back in was headed home by Aaron BROWN and it had been coming. Aycliffe almost snatched it in extra time but the shot was blocked by Robinson.
Final Score 2-2

Very disappointing result to end the winning run. Although Aycliffe were always a threat in the game the points looked to be in the bag until Aycliffe capitalised on some lack lustre play. The Anchors went to sleep after the second goal and then couldn’t wake up, they just didn’t compete in vital areas in the last 20 minutes, huge credit to Aycliffe who kept going and got their rewards.

Hayes and Bulmer caused problems for Aycliffe with their running and trickery, Mohammed marshalled the midfield well and Coulthard and Robinson were good again. The sponsor’s man of the match award will be small consolation for skipper Nicholson though.
Time to start another run of 6 victories …..