Manager Michael Dunwell fielded the same 16 as in Saturdays draw at Shildon in this first home game of the season at the newly named Coverall Stadium and they repaid that faith with all 3 points but maybe it should have been more comfortable and the last 10 minutes would have been a little less anxious for the fans. Still a massively positive start to the season. 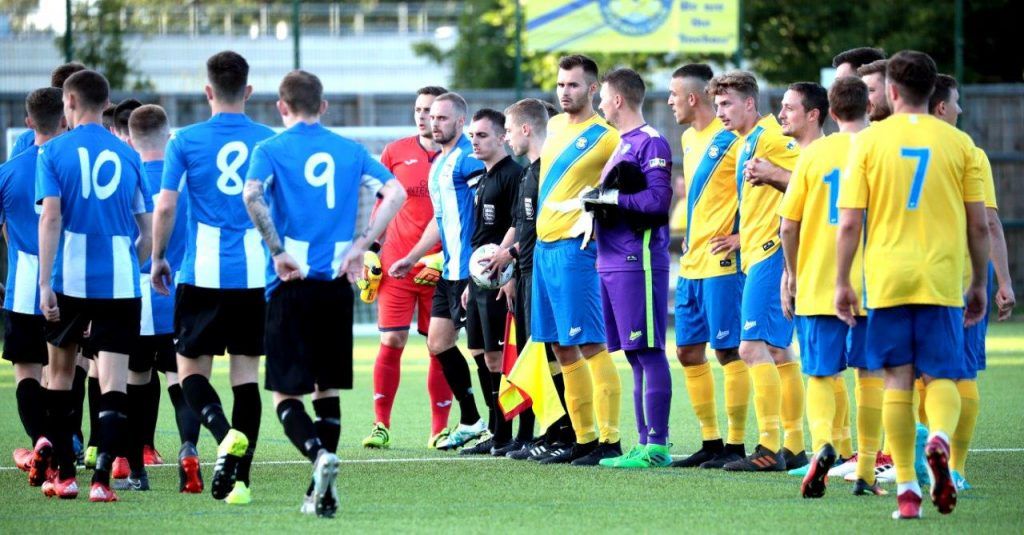 Stockton started the brighter of the two sides and were unlucky not to take the lead in the sixth minute. Anchors skipper Adam Nicholson, who it seemed got on the end of every corner and free kick last night, rose above everyone to head powerfully towards the goal, Bay keeper Flynn acrobatically tipped it over the bar to deny him the opener.

The Anchors continued to push Bay back and 5 minutes later Jake Petitjean won the ball well and fed Coleman but he couldn't get a shot away on the edge of the box. Stockton were playing some decent stuff now but couldn't find the right final ball or get in a decent strike on goal. A good passing move on 25 minutes saw James Risbrough in space behind Whitley Bay's defence but his cross-shot wasn't met by a yellow shirt and with Roberts waiting for a pull back on the edge of the box the chance was lost.

It seemed inevitable Stockton would score during this period and when Mikey Roberts chased down another ball a slight hesitation in the Whitley Bay defence saw him with a chance the exact copy of the goal he scored on Saturday but this time he could only lift it over the bar.

As the Anchors started to get frustrated and run out of ideas Whitley Bay's pacey and mobile forwards were getting into the game. Luke Salmon sent over an inviting cross from the left which looked like it was sailing to safety only for Jack Foalle to steal in at the far post and he should have worked Arthur but instead sent it over the bar. Soon after, a lovely slick move between midfielders Ryan Redford and Kevin Carr released Oliver Martin through on goal but the forward dragged his right footed effort wide of Michael Arthur’s right hand post.

Just as it looked like the the half would finish 0-0 Stockton grabbed the lead in the 42nd minute after Jake Petitjean was tripped by Jack Cooper in the box as he tried to pick up a loose ball and the referee awarded a penalty. Nathan MULLIGAN stepped up and nervelessly sent keeper Flynn the wrong way to make it 1-0 to the Anchors at half time.

Stockton started the second half as they had the first, on the attack, but this time it was Pete Bulmer causing problems down the Stockton right with his pace and quick feet. He drew the full back and played in Roberts behind the Whitley Bay back four. The forward looked to square to strike partner Coleman but his cross was agonisingly out of reach.

Coleman returned the favour soon after and pulled back to Roberts on the edge of the area but his strike was deflected into the side netting.

A second goal was surely on the cards and when Adam Nicholson again rose highest in between the two Bay centre halves to head down into the corner past Flynn it seemed the game was over and the Anchors would cruise to victory, but the referee had already blown for a foul on Taylor, which only he saw and none of the Bay players appealed for.

So the pattern of the first half was repeated, Stockton on top missing a few opportunities then Whitley Bay working their way back into the game. Striker Oliver Martin had their best chance to pull level but missed the target when he had time and space 12 yards out and despite more good work from Bulmer and Risbrough down the flanks the game started to get a little edgy as Bay pushed on. Stocktons three centre backs Mulligan, Coulthard and Nicholson were solid in defence though.
The Anchors almost released the tension in the ground when sub Max Craggs corner was met by skipper Nicholson soaring above the Bay centre backs again to crash a powerful header against Flynns bar with the keeper rooted to the spot. He laid on the floor for a few seconds wondering how come he hadn't scored this evening.

Inevitably Stockton began to sit deeper to keep what they had and Whitley Bay did move the ball well but they didn't really create any clear cut chances in the last ten minutes and the Anchors saw it out for victory they deceived on the whole balance of play.

An efficient if not exciting victory but the omens look good for Michael Dunwells squad, they're solid in defence and look a threat down the flanks. Everyone is contributing and theres still 2/3 players to come back into the reckoning shortly. Good performances from Jake Petijean who seemed to be everywhere, the centre backs looked in sync and solid and Adam Nicholson back to his best in both boxes, but Peter Bulmer got the Oscars Gin Bar and George Grill Man Of the Match for a great attacking display at wing back especially in the second half.

Disappointing they couldn't finish off the Bay when they had their chances and I'm sure that will be worked on. Massive improvement on last years start, but still just a start, four more very difficult League games against probably top 6 sides to come in August but before that, the Anchors are in Cup action this Saturday with a trip to Newcastle Benfield in the FA Cup.