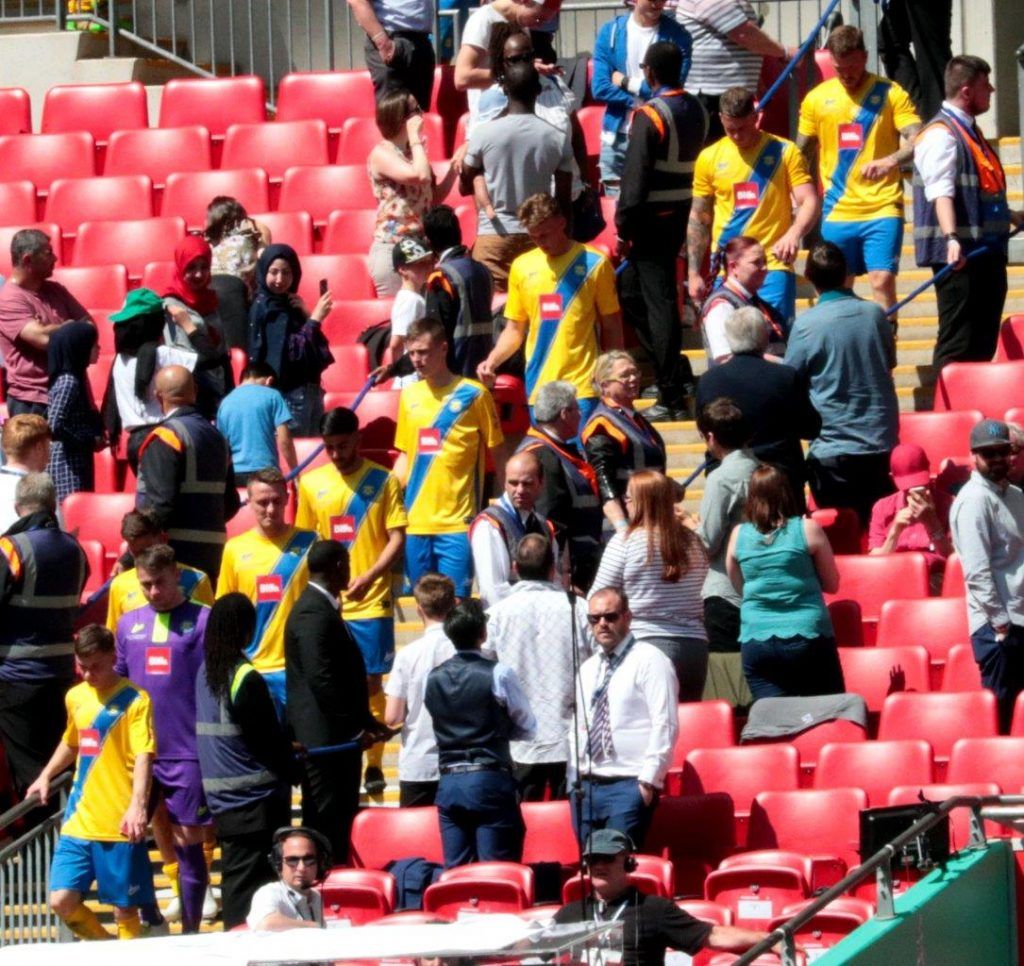 Wembley is ‘the home of football’. It is the most iconic stadium in the world, I’m sure the Maracana, San Siro et al would put up a reasonable argument but its unquestionable, to an Englishman anyway.
Unbelievably there we all were, little old Stockton Town, on a beautiful warm, sunny May Sunday afternoon, stood on the lush green grass which less than 24 hours earlier had seen Chelsea and Manchester Uniteds expensive talented players bore the pants off everyone. Today the ground was filled with thousands of Teessiders, singing underneath the national stadium’s arch ironically manufactured a few miles down the road in Darlington incidentally, a dream come true indeed.
Michael Dunwell fielded the team everyone expected, based on recent events, the unfortunate Max Craggs missing from the squad with a serious knee injury meant Jimmy Ward was moved into centre midfield and James Risbrough went to left back with Chris Stockton taking up his usual wide left attacking role.
The players walked out, on their greatest ever day in football, into the bright sunshine and intense heat to fanfares and pyrotechnics, Michael Dunwell proudly holding the hand of his young son, what a moment for him and all of the players families. The national anthem was sang with gusto by the crowd and as the kick off approached the thousands of Stockton fans made themselves heard and the goosebumps arrived as the dream became a reality…… 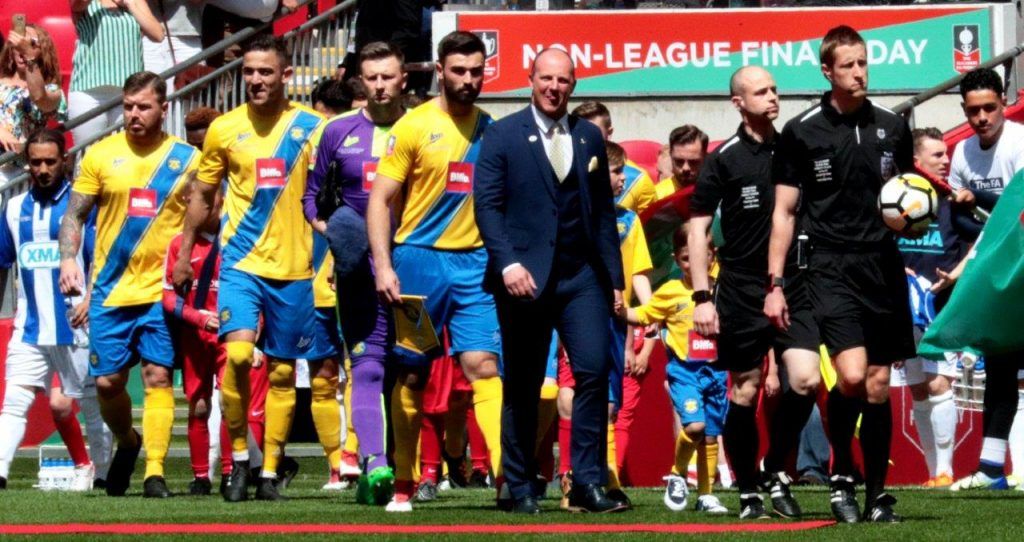 As expected it was a cagey opening period but although looking nervy, the Anchors actually settled the better with everyone getting a touch and a little more composure could have led to better things. However it was 20 minutes before the first real opportunity and it was Joe Carter’s long ball into the path of Fred Woodhouse racing through behind the static Thatcham defence, but it wouldn’t come down quick enough and he couldn’t generate enough power on the effort as he lifted it over the onrushing Thatcham keeper Chris Rackley, Chris Stockton raced in to try and finish it but brilliant brave defending by the eventual man of the match Baboucarr Jarra just got his head to the ball first and cleared the danger.

From that clearance Thacham went ahead and the match changed, the ball went down Stocktons left and Risbroughs foul led to an attack, Ward cleared the ball but it struck Chris Stockton and bounced back into the path of Jordan Brown who sprinted into the box and cleverly stepped across Wards challenge to draw the foul, referee John Brooks pointed to the spot for what looks now like a contentious decision.
Thatchams 60 goal striker Shane Cooper-Clark stepped up to take the penalty and he blasted it straight down the middle, the unfortunate Michael Arthur got good contact on it with his left arm but it deflected off and bounced into the net to make it 0-1.

Thatcham settled into the game after that and worse still The Anchors pretty much lost their way and did well to take it to half time still only one behind, efforts by Gavin James and Elliot for Thatcham were cleared and after a poor free kick into the wall by Cooper-Clark he expertly struck the rebound on the volley from 22 yards and stretched Arthur who grabbed it at the second attempt.

It seemed the Anchors got more than just a drink of water off the Management team at half time as they came out and played with more purpose and had two good chances to draw level. Chris Stockton was found by Owens free on the left side of the box, his shot wasn’t perfect but was on target only for Moran to block it before it reached the goal and Stockton was unable to sort his feet out on the rebound and the chance was gone, just moments later Jamie Owens did well to create space in the area but dragged a shot just wide of the post.

Thatcham then had 3 good chances to finish the game off, just before the hour mark, Elliot burst into the area and crossed low to Gavin James but his flick was held by Arthur. Cooper-Clark then fired straight at the keeper, who did well not to spill the ball to the oncoming Gavin James, from inside the area. Then on 65 minutes Elliot again crossed the ball for Gavin James who inexplicably hit the bar from 6 yards out, the ball bounced back down on the line before it was cleared away and ‘goal line technology’ on BT showed it was inches away from being a decisive second goal.

Michael Dunwell had to play his cards now and all 3 substitutes had a positive effect on the game and Stockton dominated possession although without creating any real clear cut chances, Kevin Hayes finally got on the ball and Thatcham dropped deeper and deeper into their box.

Sonni Coleman crossed and Owens just couldn’t get a toe to it. Makeshift striker Adam Nicholson was causing problems in the air for Thatcham and he kept a cross alive which dropped to Dale Mulligan who had time to control it and he produced a nice volleyed strike which beat the keeper but was scraped off the line by Jarra again for what seemed like the hundredth corner in no time as the pressure was ramped up. The best chance came when Dale Mulligan got free to get on the end of his brothers corner only to lift it over the bar from 10 yards. Thatcham had 9 men camped in their own box now and Stockton just couldn’t break them down, in the final throes, a clumsy challenge on Mulligan inside the box looked like a foul but the Ref seemed distracted by the resulting head injury for what was a late and reckless challenge by Jarra. Thatcham then had a break away from a Stockton free kick and with Arthur still up the pitch, Elliot had a golden opportunity to score, Garbutt was racing back to cover the goal and Elliot shot too early allowing Garbutt to clear brilliantly. The final whistle came not long after and the scenes from the two teams couldn’t have been more contrasting.

Stockton fell just short on their big day, tbh they never really got their normal flowing attacking game going and I suppose some credit to Thatcham for that with perhaps Wembley nerves playing their part too. So although a little disappointing that we couldn’t show our true selves the players gave it right ‘good go’ in the second half and there’s immense pride in the way the team conducted themselves and gave everything to bring the Vase home not to mention the remarkable level of fitness shown by them on a baking hot day and a huge pitch.
Its important we don’t allow this defeat to be a negative in what was another massive season of progress along with the added bonus of this Vase Final. The fans were simply magnificent, they brought their colours and sang their hearts out and made the day even more special for the squad. The after match party showed why this club has gone so far, everyone together side by side supporting one another through good times and bad and enjoying the ride, lots of smiles, hugging and handshaking but mainly respect for everyone’s efforts. It was a fabulous magical weekend that will forever tie everyone involved together, it was tinged with regret about the result but that will go in time and the pride of the achievement will take its place. Preparations already under way for next season, apparently we wouldn’t mind another crack at Wembley….. Up The Anchors