Micky Dunwell made one enforced change for this FA Vase Semi Final Second Leg bringing in Skipper Adam Nicholson for the holidaying Tom Coulthard.
Games don’t come any bigger than this at our level of football, the prize of playing at Wembley outweighs any financial rewards and even perhaps the silver trophy you can win at the end of it, as its every footballers dream and that had to be the driving force for both sides as Stockton looked to defend their 2 goal lead. The weather had certainly realised the importance of it and couldn’t have been any more of a contrast from the 1st Leg for this record crowd of 1800.

Within 30 seconds of the start Fred Woodhouse was presented with the opportunity he had dreamed about the previous night when a mistake by Marskes Carling allowed him to nip in and with time to pick his spot he gave the keeper a chance with his effort and Dean made the save and averted a match defining goal. An 8th minute free kick flicked on by Wheatley on the edge of the box dropped to full back Liam O’SULLIVAN stood on his own 8 yards out and he slipped it past Arthur and it was game on. Both teams were going toe to toe, Marskes controlled possession football was nice to watch but Anchors defence was holding strong and Arthur tidied up the crosses and shots that came his way. Stockton had more of the game than the first leg when the 2 goal lead had encouraged them to let Marske play but they knew they couldn’t do that today and they played their part in a thrilling game. Risbroughs fizzing cross was almost turned in by Owens and then 5 minutes before half time the Anchors got the goal to give them a boost and some more breathing space, Kev Hayes who was a constant thorn for Marske played a short corner to Woodhouse received it back and as he jinked past Curtis Round he was tripped in the box, for an awful moment it looked like the Referee wasn’t interested but he was merely asking for confirmation from his assistant it was inside the box and the roar when he pointed to the spot from the huge Stockton support was only bettered by the roar when the coolest man in the BRW ground Nathan MULLIGAN, smashed it past Dean into the corner for a deserved equaliser.

The second half started quietly as both teams and the crowd caught their breath but that didnt last long as on 53 minutes, Gott was allowed to play the ball out far too easily from the edge of his own box and it went wide to James FAIRLEY who set off at unbelievable pace from just inside Stockton’s half, skipping past defenders and lunging challenges to poke the ball under Arthur from close range for a stunning effort to put the tie back on a knife edge. What followed this is hard to describe and taking notes was even harder for someone with so much involvement, needless to say it was a breathtaking, gut wrenching, nervous half hour of brilliant entertainment. Marske had to commit more and more men forward and they did. Fairley almost picked his way through again only for Arthur to deny him. They were then denied a penalty by the referee when Fairley went down under a Craggs challenge following a neat one two with Danny Earl and the whole of Stockton held its breath until the Ref waved play on. Then a dangerous Gott free kick was met with his head by Nathan Mulligan and when the ball was picked up and worked forward Jamie Owens ran onto the pass in space and lobbed onrushing keeper Dean only to see it bounce agonisingly inches wide. Dale Mulligan and Adam Nicholson were throwing themselves at headers as towering crosses came into the box, but on 67 minutes it was Michael Arthur again providing a defining moment producing a stunning right handed save to stop a powerful Round header which seemed destined for the top corner, Dale Mulligan was first on the scene again to mop it up and Marske started to look like they knew it wouldn’t be their day.

We learnt something new as well, when Nathan Mulligans pass back after an injury stoppage flew over Robert Deans head into the net, the ref applied the new law to disallow the ‘goal’. Marske had a disallowed goal too on 89 minutes when Josh Rowbotham smashed a shot from the edge of the box and a deflection took it past Arthur but the referee had blown his whistle before the ball left his boot though for a foul by Wheatly on Craggs. Hayes was set free by sub Coleman and he chose to take it round Dean as nerves played their part and Dean was lucky not to be penalised for what looked as much a penalty as Fairleys earlier. The final action amongst all the chaos came in the 5th minute of injury time when a Gott free kick was cleared by the massed yellow ranks and Risbrough sent a 40 yard pass to Coleman who closed in on a goal with no keeper and only Gott to try and marshal 3 Stockton players. Inexplicably he missed the target from a few yards as the pressure of the occasion scrambled his brains. It meant nothing as from the resulting goal kick the final whistle brought to an end a classic cup tie and the relief exhaled by the Stockton fans almost caused a change in the atmosphere. Hundreds of fans spilled onto the pitch with scenes of raw emotion (guilty as charged), players hoisted onto the shoulders of fans and friends and that song echoed around Grangefield, Wemberlee….. Wemberlee……. it continued long into the evening and early morning too. 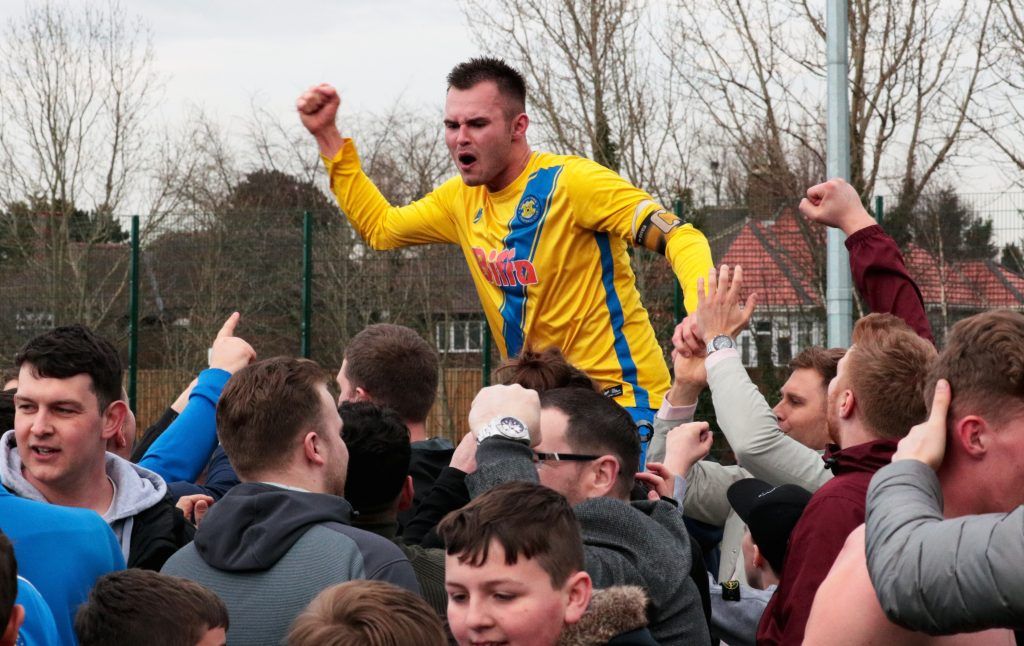 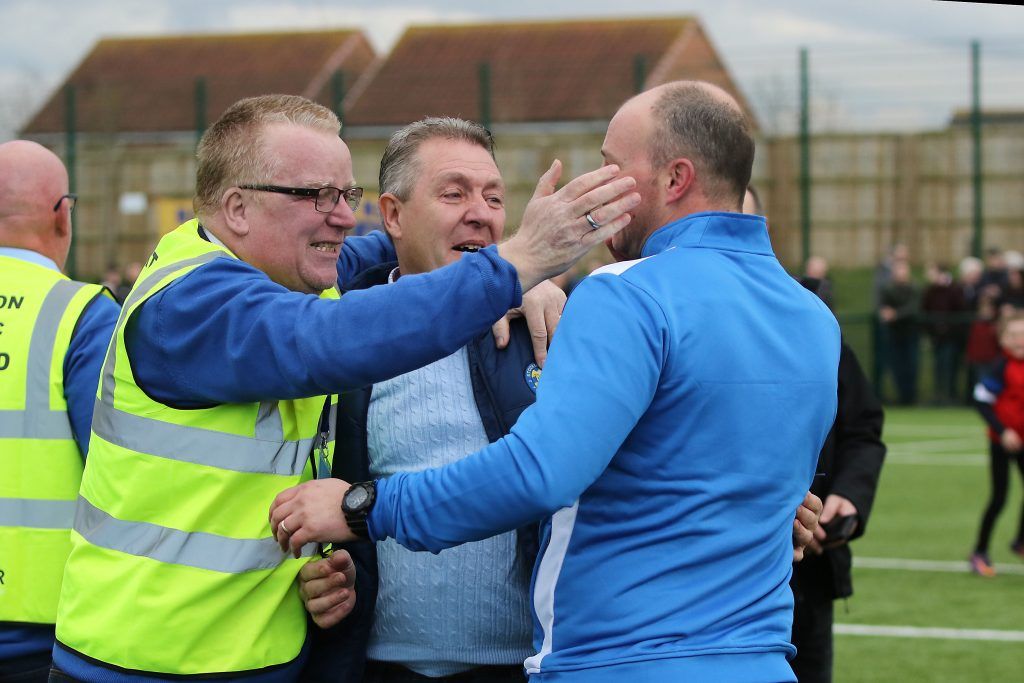 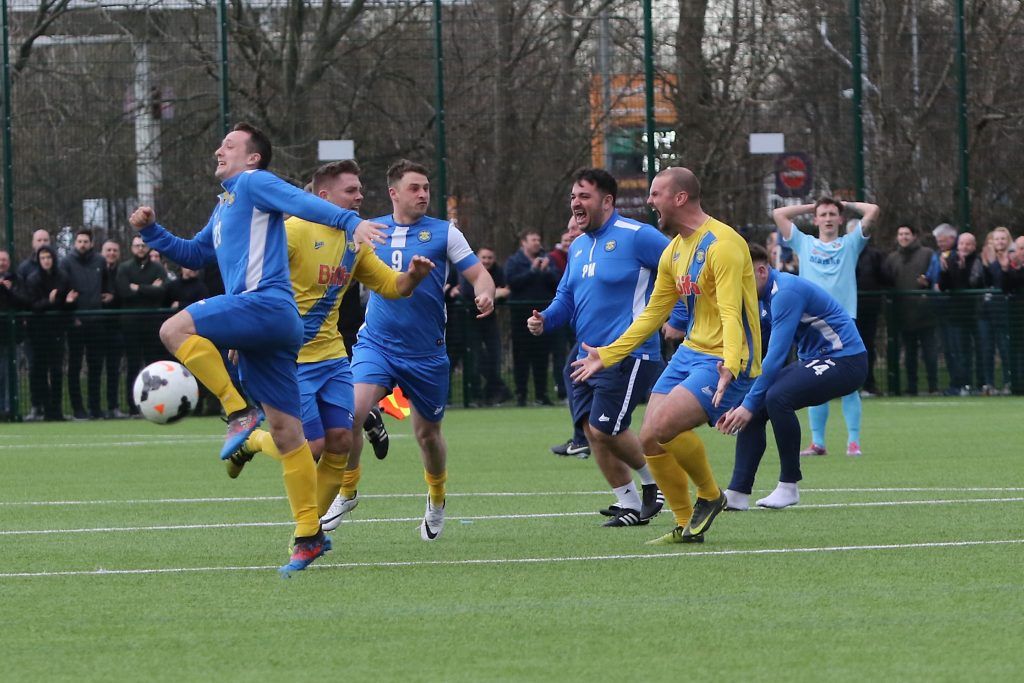 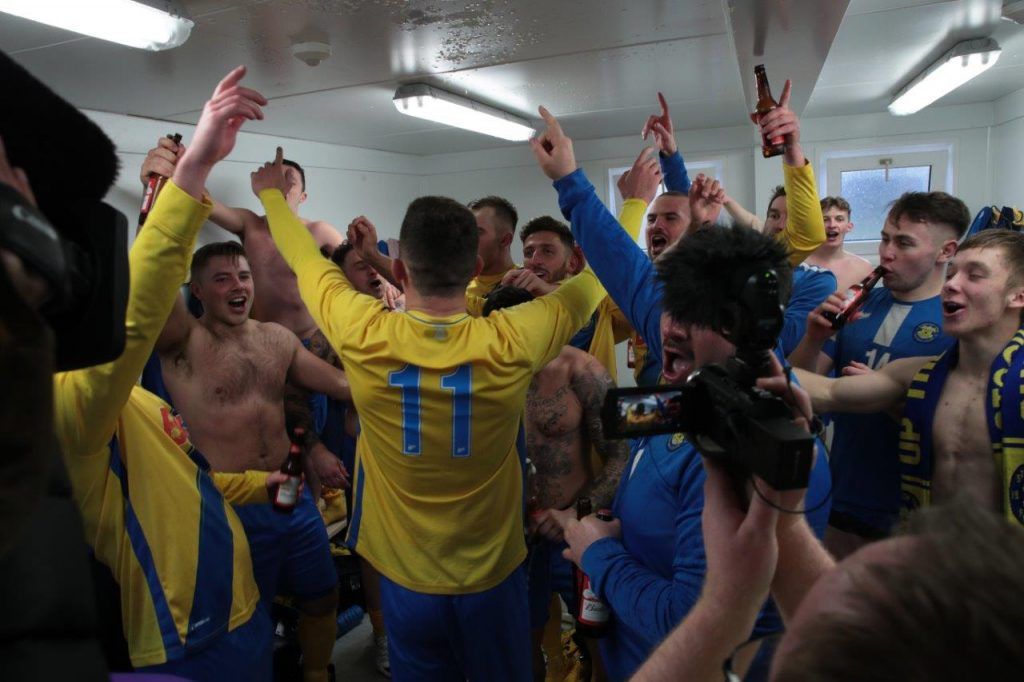 Stockton and Marske had given everything, players were cramping up and some fell to the floor at the final whistle shedding tears of joy and despair what an advert for local football why would anyone want to go anywhere else?.

What a day, what a team, what a club, people can have an opinion on us we cant change that, but we were playing in the Wearside League 2 years ago and now we’re on the way to Wembley. Astonishing. Massive performances from everyone, but Owens, Ward, Mulligan’s N and D, skipper Nicholson back to his best despite cramping up late on, were all immense when it counted. My man of the match and the whole Semi Final was Michael Arthur. Imperious, unorthodox and the victim of some unnecessary crowd abuse got his revenge in the best way by simply being brilliant. I haven’t counted up how many times it was said in the post-match interviews maybe 50 at a guess, but there is no doubt that it is UNBELIVABLE…. UTA