With Marskes pitch unplayable, this FA Vase Semi Final First Leg was switched to Bishopton Road West, which was just as well based on the weather we were presented with on the day. Michael Dunwell brought Joe Carter and Dale Mulligan back into the starting 11 and Max Craggs and Nathan Mulligan both reported fit again for this huge occasion

The game kicked off amid intermittent blizzards and strong winds and Marske could have taken the lead inside the first minute when a static Stockton defence allowed Earl to sneak in but he could only manage a tame shot and Arthur collected. The ‘home’ team were neat and tidy and gave everyone a touch, Stockton were happy to sit off and let them play. The Anchors took the lead on 11 minutes after what was the first of several cynical fouls on Kev Hayes was penalised and Max Craggs fired a great dangerous free kick into the box from the right and Marske full back Josh ROWBOTHAM striving to get there before Owens could only head the ball into his own net. 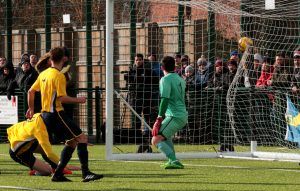 Michael Arthur had to get down sharply to his left to save Liddles long range effort 5 minutes later and Coulthard had to hack the rebound away for a corner as Marske tried to turn possession into chances. The horrific weather having an effect as very strong gusts of wind brought blizzard conditions on several occasions and caused the odd mistake and mishit pass. Marske came closest to an equaliser in the 25th minute when first Earl then Gott had shots blocked by the Anchors centre backs and the final looping effort from Gott clattered the post as Arthur scrambled across the goal to try and keep it out. Chay Liddle was the stand out in the first half for Marske and he made a great run beyond the Anchors defence but couldn’t get any power into his shot as the Seasiders continued to dominate possession. Carter and Hayes pace was a problem for Marske down the right and these two linked up well with Hayes jinking inside O’Sullivan and rolling it to Craggs, his low shot was turned in by Fred WOODHOUSE in the 42nd minute as he made a clever run in front of Wheatly. 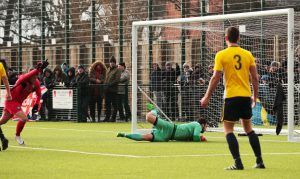 Craig Gott missed a glorious chance to get Marske back into the game on the stroke of halftime when he missed the target from 12 yards and the Seasiders went in frustrated.

The second half was a little more open. Marske continued to press and dominate the ball but superb defending from the Anchors restricted the opposition to just a few chances and long shots. Full Back Liam O’Sullivan found himself free inside the box on 52 minutes but didn’t connect properly with his attempt to volley in Stephensons cross from 6 yards and Arthur grabbed it easily. 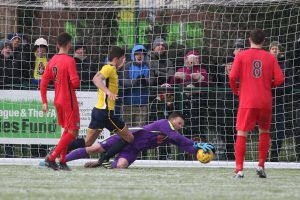 Danny Earl then broke through the ranks of Stockton defenders on 62 but hesitated when one on one with Arthur and the keeper saved his attempt with his foot. Strangely that seemed to knock a little stuffing out of Marske and although they pushed right to the final whistle the Anchors defence coped comfortably with what was thrown at them. Stockton had more of the ball this half and Kev Hayes, despite being upended several times without any cards being brandished, was a constant thorn to Marske. With 15 minutes left the Anchors spurned an opportunity to put the tie almost beyond Marske when Fred Woodhouse burst forward and Stockton had a man advantage in the attack but his pass to Owens was probably the wrong option as he had 2 spare men to his right and it came to nought.

Stockton take a tricky 2 goal lead in the next leg in 7 days time, but its a million times better than a 2 goal deficit. A massive occasion brings an unbelievably hard game especially as Marske will be hurt by this result and desperate to get into the game quickly. But the Anchors showed great resilience and that has to continue next week in spades.

Michael Arthur sneaks in as my MoM for a flawless display, although Tom Coulthard and Dale Mulligan were immense when it counted along with Carter and Ward in defence. Everyone did their job and the fight and spirit was evident. Jamie Owens led the line and was as good as I’ve seen him without scoring. One more push…..