Manager Michael Dunwell restored Dale Mulligan to the defence in place of Adam Nicholson, Joe Carter is away working still and Chris Stockton will be unavailable for a few weeks with a fractured collar bone. Michael Arthur retained his place between the sticks for this history making FA Vase Quarter Final at Bishopton Road West

An enormous crowd of 1213 crammed into the ground and most went home satisfied with what they’d seen however lots of them were still making their way in when after 2 minutes Woodhouse’s neat ball inside full back Smith set Ward free and his cross found its way to Max Craggs 10 yards out who controlled it really well but dragged his left foot effort wide with the goal at his mercy. Craggs was in the action again 5 minutes later when his fizzing free kick into the box found Owens who headed wide as the Anchors looked to make a positive start. The game was pretty much end to end at this stage and Windsor were creating their own opportunities and on 10 minutes a flicked header found Gould and his low cross beat Arthur as it flew across the 6 yard box and just as it appeared Matty Woods was going to open the scoring for Windsor Matty Garbutt brilliantly blocked his shot almost on the line and Stockton cleared. 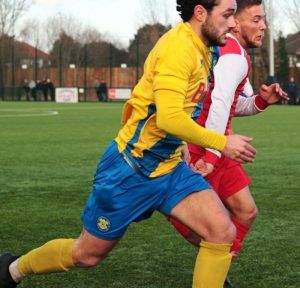 Craggs was again involved in the game this time on 15mins heading down Mulligans free kick to Owens who dragged it wide of the far post from 10 yards out on a tight angle. As the Anchors pressed more Woodhouse rose unmarked to a Craggs ball only to head it over the bar and it was only a matter of time when the Anchors would take the lead, it came from a short corner on 28 minutes set up from Hayes and curled in perfectly again by Craggs, the ball  went to Dale Mulligan at the far post and he hooked it back across goal to his defensive partner Tom COULTHARD who poked it home from close range to the delight of the home fans. 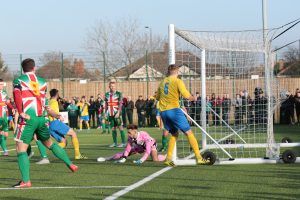 The Anchors second goal after 41 minutes was a great move. The energetic Fred Woodhouse, who appeared to be everywhere on Saturday, picked up the ball centrally and turned away finding Nathan Mulligan he rolled the ball into the path of the advancing Jimmy Ward and with so much time he delivered the perfect cross for the prolific Jamie OWENS to head home into the narrow gap between post and keeper for  his 35th goal of the season and give the Anchors a comfortable half time lead.

Chances were scarce in the second half as Windsor cranked up their tempo, but Coulthard and Mulligan were human Anchors in defence and dealt with pretty much everything thrown at them. With Garbutt and Ward having good games defensively too and Mulligan (N) sweeping up in front it all looked solid.

Stockton caught the Royalists short at the back on 65 minutes, Owens collecting the ball and as Risbrough steamed past him he lobbed it over the advancing defender, Risbrough was about to pull the trigger on the edge of the box when Ingram seemed to play the man and barge him over, the Referee waved away the Penalty claims.

Ex Boro Scholar Matty Wilson made his debut for the club as he replaced a tiring Kev Hayes after 74 minutes. He came so close to scoring with his first touch as his delicate dink over the onrushing keeper from Owens incisive pass just cleared the bar. Stockton’s only real scare came when Gould’s ball in was met by skipper Knight who should have hit the target, his header deflected off Dale Mulligan but straight into Arthurs assured hands. Stockton saw the game out safely.

Amazing result, Amazing Crowd, Amazing day…….. Can it really happen? ? Wembley??    We might just give it a good old go…..

The team weren’t at their breath taking best but they were efficient today, in fact as solid as we’ve been all year. They always looked like they had too much for Windsor, Kev Hayes as usual got a lot of attention from the opposition and had to work hard to get into the game but that meant Fred Woodhouse found more space and he was excellent, Max Craggs dead balls were what strikers dream of all game and he was heavily involved. Tom Coulthard was immense as usual and Dale Mulligan not far behind. But Jamie Owens took the sponsors Man of the Match and he was at his very best and the Windsor centre halves who were backing off him very quickly will be aware they’ve ‘been in a game’, add to that his technical levels were also top notch today. Semi Finals here we come, Up the Anchors.