Manager Michael Dunwell had a full squad available, except for Joe Carter who picked up a knock on Wednesday, for this important 4th Round FA Vase tie against a star studded West Auckland team who only sit above the Anchors on Goal Difference in ENL Div 1. Max Craggs and Jamie Owens returned to the starting line-up. Another record crowd crammed into Bishopton Road West, supplemented by Marske and Hinckley fans after their game was postponed and Boro fans who raced across from the Riverside to get a glimpse of the best team on Teesside.

The Anchors started the game better and Fred Woodhouse had a header just wide and Kev Hayes saw a snapshot held by Adam McHugh before a towering header from Dale Mulligan from a Craggs Corner was cleared off the line. With 16 mins gone the Anchors continued to dominate and Max Craggs lined up a free kick from a position we’ve seen him score some great goals this season, this attempt went low and McHugh parried only for the two onrushing Stockton forwards to leave it for each other and the chance to convert into an empty net had gone. West responded well and found their feet, Wearmouth and Morris linked well down the right and Morris’s cross flashed across the 6 yard box just evading Fishers lunge. Then on 32 minutes West took the lead when a poor clearance was played back into Stocktons 18 yard box and Wood rolled a back heeled pass to BELL who fired home from 10 yards at the near post. The goal was a little against the run of play but it spurred them on and they controlled the remainder of the half and Wearmouth and Fisher both went close, Liam Jordan making a good save with his legs from the increasingly dangerous Fisher.

Second half saw an early opportunity for the Anchors as Owens got the ball and created room just near the penalty spot but he couldn’t find the corner of the goal and McHugh made a good save. Chris Stockton replaced Ward and Risbrough moved to full back to deal with the dangerous Wearmouth. This sparked Stockton and Owens was getting closer as he crashed a 25 yard shot which McHugh somehow tipped over acrobatically on 65 minutes and then latched onto a Stockton near post cross which was deflected out for a corner. At the other end West continued to make their own chances and Jordan was on hand to save low down from Wood as he bore down on goal. The Anchors got the equaliser they deserved on 72 minutes when a corner played into N Mulligan was headed down and OWENS was the quickest to react to fire home from 8 yards. West rallied and the Anchors defence made last ditch blocks from Fisher and Bell in quick succession and another top class save with his legs by Jordan to deny Fisher in what was now a pulsating cup tie filled with everything good about Cup football.

Just before the final whistle took us into extra time there was a little light hearted entertainment, although painful for the Referee concerned, when the man in the middle appeared to be doing his karate kid or Flamingo impression and then collapsed with what appeared a calf strain or cramp. The crowd loved it just like when the Pantomime Villain gets his comeuppance. The 4th Official was called to arms and he saw the final seconds out with no dramas

Extra time saw Jordan make good saves from Purewal and Fisher again and one superb save from a header which looked in all the way, McHugh earned his corn too as he palmed away a Hayes shot which looked great in the air, he could only watch as the increasingly influential Hayes cut in and cracked a shot just inches over his bar, dipping just a fraction too late.

With just 5 minutes remaining the Anchors took a decisive lead, they’re making a habit of scoring late goals, especially in Vase games and this one was fairly simple but none the less valuable, Hayes and Garbutt who’s link ups had caused West trouble in the latter stages of the game caused confusion and a deflected clearance fell to Garbutt in space, he raced towards Wests box and curled a low ball into OWENS path and the striker smashed it home to spark wild celebrations amongst the fans and the bench. 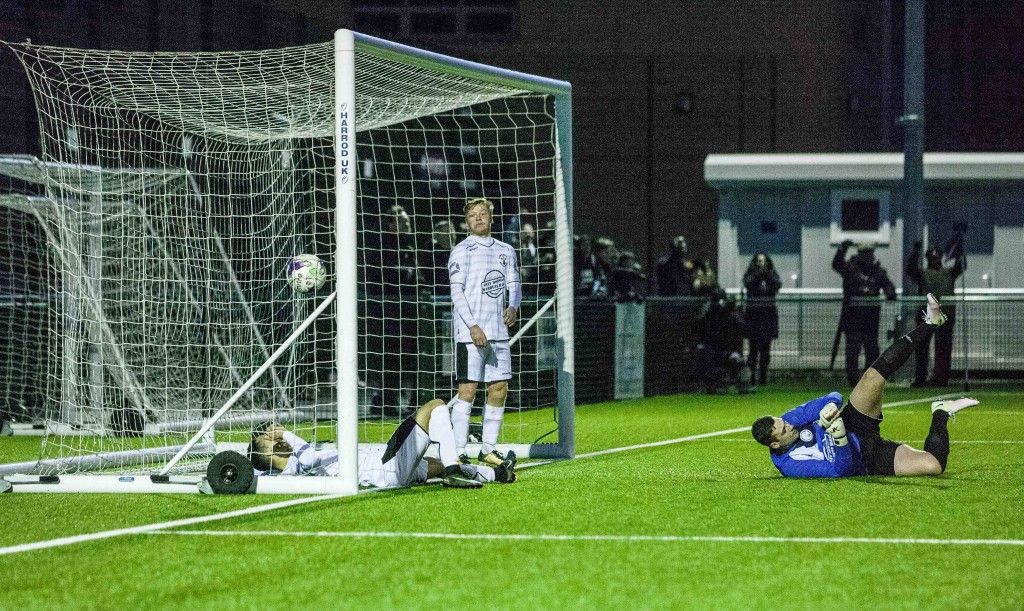 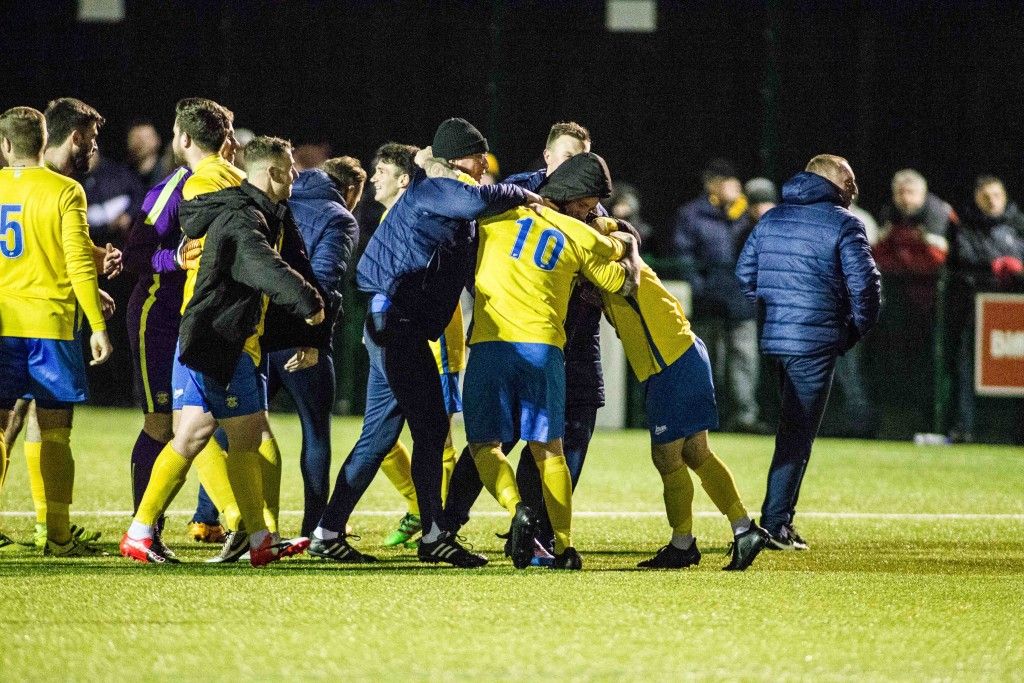 It would be remiss of me to ignore the ‘incident’ at the end of the game as much as I would like to, as it was sickening to see. Suffice to say, with less than a minute left a brawl ensued when Stockton players came to the aid of their team mate who was attacked by a spectator who invaded the pitch. After the final bell, the Referee dished out Red cards to N Mulligan, K Hayes and West’s goal scorer Anthony Bell. Just a short time later the final whistle came and later in the evening fuelled by refreshments, dreams of Wembley and how close it is now.

There is a famous line from the Gladiator film, just after Russell Crowe slaughters the opposition in the amphitheatre and he looks in disgust at the crowd and says…. “ Are you not entertained”… It just comes to mind watching home games at Bishopton Road West this season, especially in the FA Vase, win lose draw, its undeniably entertaining and its no wonder the fan base is increasing by the week, spectators can’t fail to think its value for money.

Credit to both sides for the quality of football and the pace the game was played at. Very hard to pick a man of the match for the Anchors as the whole is greater than the sum of the parts with this team. Nathan Mulligan was excellent, Liam Jordan made half a dozen crucial saves, Jamie Owens had his best game of the season, Hayes and Stockton caused all sorts of problems for the last half n hour and extra time… Sponsors Stockton Decorators selected the immense Tom Coulthard as man of the match, no one can argue, no one was that bothered who got it tbh, this a team and that team were in the hat… UTA