Vase fever has taken over in Stockton-on-Tees and it would be understandable for the players to take their eye off the ball after seeing people queuing up before the game to purchase their tickets for the semi final second leg but its not going to happen on Michael Dunwell’s watch….. Captain Adam Nicholson replaced Tom Coulthard who is away working as is Joe Carter and Chris Stockton is on the mend from his collarbone injury but not considered.

Bishops started like a team on a mission and their game plan was all about pace, closing down quickly breaking quickly and getting the ball out to right winger Poundry quickly who had a great first 20mins. It was Poundry who worked the ball into the penalty area on 5 minutes and it fell to Ryder on the edge of the box who was denied a shot on goal by a good challenge from Garbutt. Just a minute later a dangerous Free Kick by Ryder stretched Anchors keeper Arthur and his parry looked likely to bring the first goal as Sullivan closed in but he bravely smothered the rebound shot. Stockton were finding it hard to deal with the intensity of Bishops but they looked dangerous on the ball and Jimmy Ward stepped forward and brilliantly played in Fred Woodhouse to finish well only to see the linesmans flag up. It was Wards pass again on 25 minutes which saw Owens work a shooting chance which was well tipped over at full stretch by McHugh. Ward might have had a hard time from Poundry early on but he was now creating all sorts of problems for Bishops in their half, his quick free kick found the unusually quiet Kev HAYES in the centre of the pitch one on one, he latched onto it jinked round Hogans and the despairing keeper McHugh to slot home on 35 minutes. 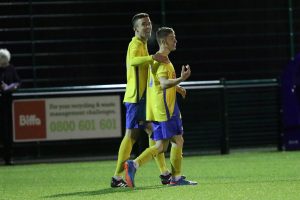 Bishops were still energetically chasing down everything but Stockton were now picking them off and a minute after the goal, Risbrough was put through by Craggs only for last man Tobin to cynically bring him down 30 yards from goal and use up all his luck when receiving just a yellow card.

Second half started as the first finished, Bishops energy wasn’t as high and Stockton were finding more freedom to play in, Owens went close with an effort and then on 49 minutes Owens again chased the ball to the corner flag and powered his way towards goal firing the ball across the 6 yard box to Kev Hayes who will have woken up in a cold sweat during the night wondering how he missed the target from just a few yards out with the keeper nowhere to be seen. Captain Adam NICHOLSON spared Hayes blushes in the 57th minute when while drifting back to his position after a corner he received the ball from Craggs on the edge of the centre circle and wandered forward into the space, one look and he delivered a lovely chip from 30 yards which was more about control and accuracy than power and found Bishop keeper McHugh too far off his line to deal with it. A rare bird for the centre back a goal outside of the box and not with his head but never the less a stunning effort. 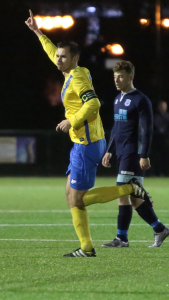 The Anchors saw it out comfortably after that almost increasing their advantage with a lovely fluid move involving Risbrough, Ward and Woodhouse to find Owens who’s powerful effort was well saved by McHugh and Sonni Coleman nearly capped a lovely cameo performance full of effort and skill with a goal right on 90 minutes running onto a through ball from Garbutt only for McHugh to smother his effort just inside the box. Arthur had only one save of note second half and that was in the 3rd minute of stoppage time when Ryder drilled a low shot which was comfortably taken at full stretch by the Anchors goal minder.

Once the Anchors got used to the pace of Bishops play there only looked like one winner. Good performances again from Craggs and Mulligan in midfield, Garbutt was solid and Jimmy Ward at left back was probably the Anchors most creative player and would have got Man of the Match save for Adam Nicholson’s stunning goal combined with also looking like the Adi of old for the first time since he returned from injury, solid in the air and tidy on the floor it was a Captains performance. Downside is a couple of injuries to key players Craggs and Nathan Mulligan, Michael Dunwell will be anxiously awaiting the Physio’s verdicts on those. But on the plus side that’s 50 points gained in the last 24 games which would be promotion form if not for the unfortunate start to the camapign, long may it continue.