Michael Dunwell had to shuffle the pack because of injuries. Max Craggs and Nathan Mulligan weren’t fit enough to be included and Alan Cossavella and Sonni Coleman replaced them but Joe Carter returned from foreign climes and along with Chris Stockton was available for the bench after 3 weeks out. Tom Coulthard was included with Dale Mulligan rested.

The game started very quickly with both teams going for it from the off. Sonni Coleman chose to take on the near post shot and nearly sneaked it past keeper Winter after a neat one two with Risbrough on the edge of the box had freed him up in the 2nd minute. An Aycliffe attack just a minute later had everyone surprised to see the Ref blow for a free kick. Recent signing Thiabault CHARMEY expertly fired the free kick home from 20 yards into the far side netting with Arthur having no chance.The chances kept on coming though and on 7 minutes Hayes jinked in field past 3 players and fired a left foot shot which saw Winter make the first of several top class saves. A corner on 10 minutes brought an equaliser for the Anchors, skipper Nicholson rising highest at far post to head Woodhouse’s cross back across goal for Sonni COLEMAN to head home from close range 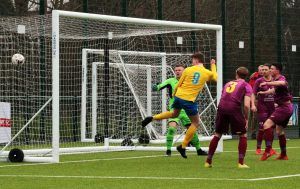 The Anchors had the bit between their teeth now and Fred Woodhouse powered past the static Aycliffe defence and stood a lovely ball up to the far post but Hayes missed the target with his header under pressure and on 22 minutes a Hayes corner almost brought a replica goal when Nicholsons header back across the box was headed just over by Woodhouse. Aycliffe were dangerous on the break and Banks was finding space to link up the play the lively Hutchinson brought a good save from Arthur after a scramble in the box, but Stocktons best move of the game involving Ward, Owens and Woodhouse ended up at Colemans feet and from 14 yards out he opened up his body for what looks like a certain goal but curled his shot high and wide. All the pressure came to nothing and slack marking by the Anchors defence allowed Banks to drift in and pick out Ben TROTTER on the edge of the box and he slotted it neatly right into the corner of the net to give Aycliffe a lead and something to hang onto. 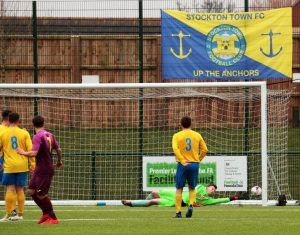 Second half followed much the same pattern but Aycliffe who with Costello, Mitton and Grant-Sousby impressing, were well organised and managed to make Stockton work very hard for the few chances and those that did appear were handled brilliantly by Aycliffes man of the match James Winter. Aycliffe almost sealed it in the 65th minute but a brilliant point blank save from Arthur denied Banks when through on goal. Aycliffe stopper Winter could only watch a Jamie Owens free kick flash past his post but made a superb reaction save from Coleman’s header after he’d pushed away Hayes cross and when Risbrough left Aycliffe defenders for dead in the 82nd minute, his cross was met by Hayes 12 yards out but disappointingly for him he blazed it over and the game ended in defat for the Anchors despite a frantic last 5 or 6 minutes. 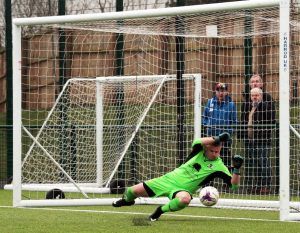 Anchors probably deserved at least a point but they’ve got to take it on the chin and prepare for a massive game next Saturday. No real stand out performances tbh, lots of players did well in spells though. Joe Carter got a run out and looked like he’d never been away and Stocko got rid of some rust. Sonni coleman gets the MoM vote for another typical performance all energy and 100% effort and on another day would have had a hat trick.