Stockton snatched a point from a game they could have won but a draw was probably a fair result after a series of defensive lapses. Manager Michael Dunwell had Joe Carter unavailable and restored Matty Garbutt to right back with Adam Nicholson getting a run out to continue his rehabilitation, Dale Mulligan was on the bench.

Ashington were organised and disciplined and allowed Stockton to work the ball around but without creating many problems. The Colliers took advantage of a poor defensive header by Garbutt straight to Bowey on the edge of the box who slipped it to STEVENS to finish past Jordan on 14 minutes. The Anchors responded well and Risbrough crossed to Craggs who’s downward header was struck on the half volley by Owens but blocked bravely by Christensen. Stockton looked dangerous now and with Ashington sitting deep skipper Adam Nicholson stepped forward with the ball into space, played a one two with Woodhouse and slotted the ball inside the full back for Chris STOCKTON to hammer into the roof of the net on 23 minutes. 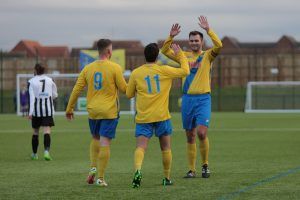 Kev Hayes popped up on the left jinked past McAndrew and clipped a lovely cross which Grant just tipped away from Owens left foot at the vital second as The Anchors ramped up the pressure. But just when it looked like they were in control a misunderstanding between Nicholson and Jordan saw STEVENS nip in and chip the ball over the keeper to make it 2-1 on the stroke of halftime.

It didnt take long for Stockton to get themselves level again in the second half, Garbutt redeeming himself with an exquisite run and cross to find OWENS who headed firmly into the bottom corner from 10 yards out on 51 minutes. 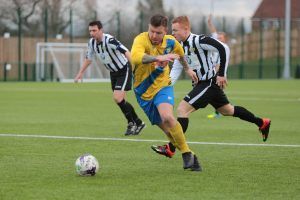 Ashington came back into the game after this but neither side really threatened, Kev Hayes went close with his trademark left foot curler, Nathan Mulligan crashed a 30 yarder just wide and an Ashington Free kick scraped the bar at the other end. Sonni Coleman came on for Owens and his energy spurred the Anchors on, him Woodhouse and Stockton all causing problems with their pace and movement,  but they fell behind again on 81 when PEARSON was allowed far too easily to run down the left wing and set himself up, his cross to no one in the box was misjudged by Jordan and it floated over him into the far side netting to the delight of the Colliers team. Stockton huffed and puffed and just when it looked all lost a nice flowing quick move on 89 minutes saw Hayes find Stockton in the box and as the Ashington defenders pounced he rolled it back to MULLIGAN 16 yards out and he lashed it into the top corner to earn the Anchors a point.

Hard to say if its a point gained or 2 points dropped, when you score 3 you expect more, but at this standard you cant afford to be careless like Stockton were. Ashington managed to stem the flow to Hayes and blunt that part of the attack and were efficient and organised. Nathan Mulligan gets man of the match mainly for the quality of the finish for the equaliser and his usual hard working display.