Michael Dunwell made several changes for this first ever meeting with Penrith. Liam Jordan and Joe Carter were away, Dale Mulligan has ankle ligament damage and Kev Hayes was rested, although not for long as it turned out. In came Michael Arthur in goal and Jimmy Ward resumed left back duties.
Penrith with two huge strikers tried to play to their strengths, getting the ball forward early and hoping they could hold it up and win flick ons.
The Anchors used their pace and width but opportunities were few against a resilient and physical Penrith defence. A very lenient Ref didn’t help. Hayes replaced Stockton after a ‘robust’ challenge had seen him crash into the fencing and damage his shoulder.

James RISBROUGH, playing in an attacking role this week, opened the scoring on 29 mins when he tapped home after Penrith keeper Dixon had excellently saved Owens goal bound flicked header after a great driving run by Fred Woodhouse and a lovely curling cross by Max Craggs. 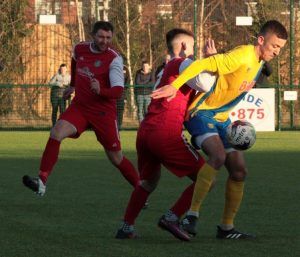 Second half saw Penrith have a couple of early chances but the Anchors stretched their lead in the 50th minute when Jamie OWENS headed home his 34th goal of the season, at the far post, from Risbrough’s cross. 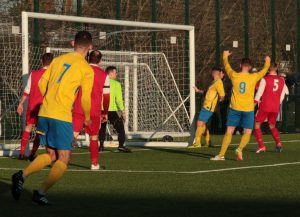 Owens was also involved in the 3rd goal on 58 mins when he neatly flicked Craggs pass round the corner to Woodhouse and he found RISBROUGH on the edge of the box who shot home with his ‘un-favoured’ right foot into the near bottom corner. Game over or so everyone thought. The manager made a couple of changes, replacing the lively Woodhouse and Owens with Coleman and U18s debutant Jack Lambert  and almost sat back. Unfortunately skipper Adam Nicholson’s pass back and Arthur’s call to indicate any danger didn’t have the same idea and Murray JONES nipped in to round the keeper and although he nearly messed it up he did manage to get it over the line. Penrith found a new lease and suddenly Stockton looked nervous as the Cumbrians forced the ssiue and caused a couple of moments of concern in the home sides box. Nathan MULLIGAN showed his class and a terrific amount of skill though to pounce on a loose ball 20 yards out flick it up and volley it sweetly into the far corner to restore the 3 goal lead on 76 mins. 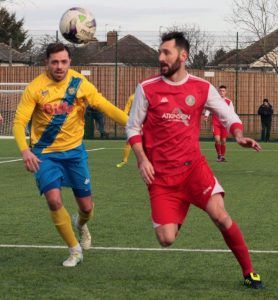 That lasted exactly one minute as Penrith attacked down the right and after failing to clear properly the ball fell to Martin COLEMAN and he wrong footed Arthur to slip the ball home at the near post, ensuring the last 13 minutes were more anxious than they should have been. The Anchors saw it out and got back into winning ways in the League.

Disappointing to concede 2 more sloppy goals and losing Chris Stockton to a shoulder injury is a worry for next weeks biggest game in Stocktons short history, but the pace and movement was so good to watch again at times. Owens, Woodhouse and Hayes all causing confusion in Penrith backline. James ‘Munchie’ Risbrough gets man of the match for two nice goals and an assist. At the moment our philosophy of we’re scoring more goals than you is working. U18 star Jack Lambert made his debut and did ok after a nervy 5 minutes, contributing a couple of times in the latter stages, one for the future definitely. VASE mania begins now……..