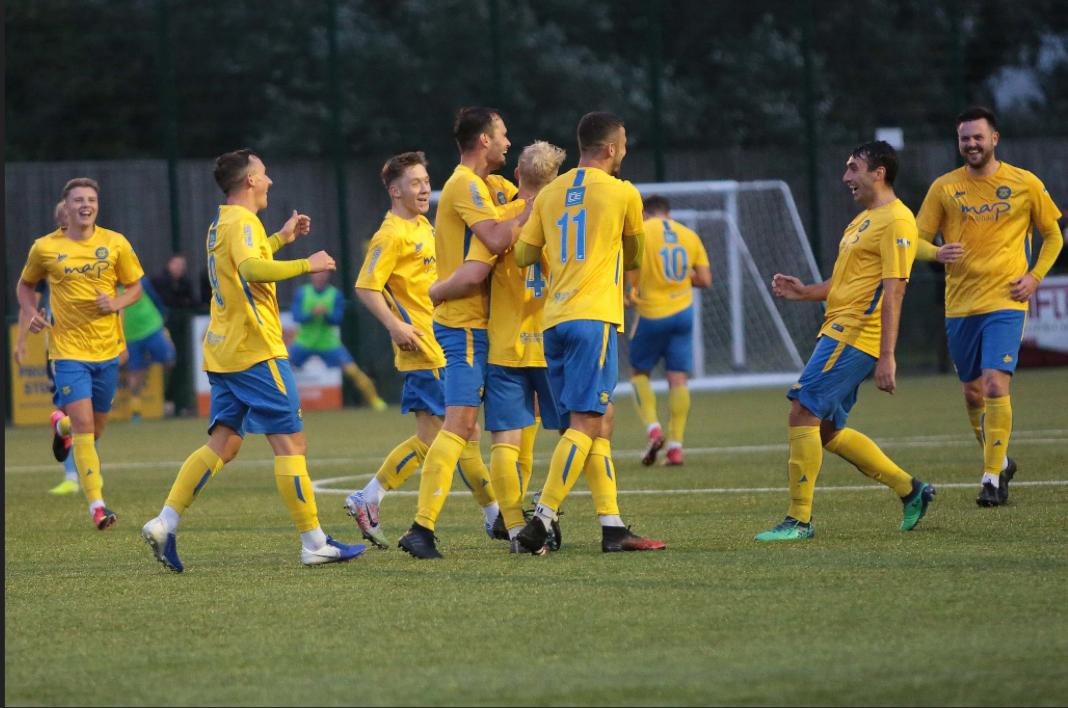 Stockton Town came from behind to seal an exhilarating 4-1 win over South Shields.

The Anchors fell behind when Robert Briggs headed in Alex Kempster’s corner.

However a scintillating three minutes at the end of the first half saw Stockton turn it round through a Nathan Mulligan brace and a piece of magic from Tom Portas.

Things got worse for the Mariners when Nathan Lowe saw red.

Gloss was added to the scoreline in stoppage time when substitute Jamie Owens scored from the penalty spot.

The Anchors came into the game on the back of Saturday’s 2-1 defeat to Liversedge, while South Shields beat West Auckland 3-1.

South Shields saw much of the ball early on but it was Stockton who had the first shot on goal when Kevin Hayes cut in from the right and fired wide.

In the 18th minute, Shields had an effort when Josh Gillies freekick fell to Jason Gilchrist who struck over while leaning back.

The visitors were in again but were denied by a last ditch block. From the resulting corner, the Mariners had the lead when Briggs was free to head in Kempster’s delivery.

Confidence was brimming from Shields and it led to speculative effort from Briggs that sailed wide.

South Shields raced to another opportunity as Gillies got in behind before striking the bar with his effort.

Stockton squandered a chance to strike back when Hayes blazed Risbrough’s ball over after the winger had found space.

They then took their chance when Nathan Mulligan was released and finished emphatically.

The Anchors then found themselves in front when a piece of artistry saw Tom Portas elegantly lob Myles Boney.

The frantic moments continued as South Shields almost levelled through Kempster who was foiled by goalkeeper Callum Roberts in a scramble. On the ensuring clearance Stockton extended their lead when Mulligan found his way through and tucked the ball home.

It was breathless football which saw Stockton heading to the break with an impressive lead.

Ten minutes into the second half, Stockton nearly had a fourth when Mikey Roberts rounded the goalkeeper. Luckily for South Shields, Dillon Morse was there to slide the ball off the goal line.

Any hopes South Shields had of getting back into game appeared to fade moments later when Lowe saw red.

They certainly did fade when they wasted a decent opportunity as youngster Sam Hodgson was unable to turn in Kempster’s cross.

Substitute Owens seemed keen to add himself to the scoresheet with two efforts fired over the bar. He did get is chance to make the win emphatic when Stockton were awarded a penalty for handball by Blair Adams. Owens made no mistake by sending the goalkeeper the wrong way to seal the win.

Stockton’s win marks their first since lockdown, next up is a trip to Whitby on Saturday for our final pre-season friendly.