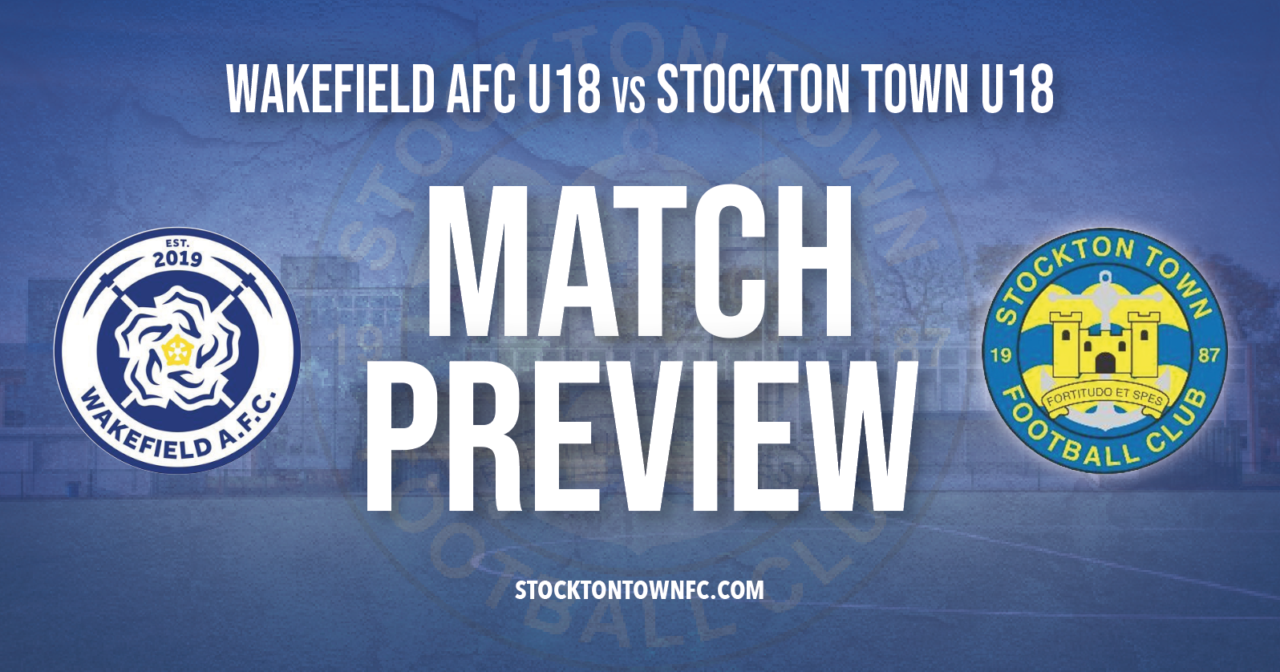 Wakefield AFC U18 vs Stockton Town U18

Stockton Town Under-18 travel to Wakefield AFC Under-18 on Saturday for their first competitive fixture since December 2020 in the Junior Premier League.

The Anchors are currently top of the North East & Yorkshire regional league after five wins and one draw from their six games, including a 9-0 thrashing of Emley AFC in September 2020.

Liam Cox’s side face four away trips in their final half dozen league fixtures, starting with a visit to West Yorkshire on Saturday, and the Anchors U18 manager is looking forward to returning to action.

“I’m just looking forward to game of football,” he said. “It’s been too long since we’ve kicked a football, we just want to get back onto the pitch and it should be good just to get everyone together.

“I’ve spoken to Wakefield’s manager to discuss kick-off times and we think the game could be on the Moon and we would be there, nothing is going to stop up turning up for a game of football.

“We [myself and the team] spoke last night and everyone is just raring to go to get on the pitch.”

In line with U.K. Government guidelines, the return to outdoor training is now permitted and Cox revealed it has been good to get back on the training field.

Cox added: “It’s been good, although there’s been a lot of rust, we’ve got a strong group of lads on the pitch and socially too.

“We’ve had a couple of friendlies this week too just to get some match fitness back and knock some of the rust off.

“It’s been a really good environment, getting everyone back in, everybody has looked after themselves physically with them being young lads.

“From a football perspective, it only took a couple of sessions to look somewhere near where they were pre-lockdown, so we’re in good shape.”

Ahead of the game, Cox said he hopes for a “strong performance” from the players as the Anchors look to return to action with a positive result.

“We’re hoping for a strong performance”, the U18 manager said. “We want to get the lads on the ball as much as we can as we are ball dominant team at our level.”

“We’d like to think we will fit back into our system well, we’ve got a lot of good individual footballers so we want them to show up and demonstrate what they can do.”

“At that age it is about the lads development rather than the team so we are hoping for strong individual performances within the group.”

Stockton Town beat Wakefield 2-1, with a last minute penalty from Gary Mitchell, on the opening day of the season and Cox describes Wakefield as a “strong side”.

Cox said: “They were strong, they looked like they had more first year Under-18’s, they were a young side.

“Like more teams in our division, they were very well organised and had a couple of really strong players.

“Since the first game of the season against us, they’ve gone unbeaten in the league so it’s going to be a very tough game.

“We needed a last minute penalty from Gary Mitchell to win the opening game, they were one of the toughest sides we’ve played this year, it’s going to be a good game between two strong, organised sides.”

First Team manager Michael Dunwell has named several members of the Under-18 team in his matchday squads this season and has given minutes to Gary Mitchell and Keelan Wright in the Northern League.

Liam Cox believes the opportunity provided in the first team has made the Under-18 side stronger as a group.

“It’s massive for them”, Cox said. “We’ve got five lads training regularly with the first team squad, Keelan and Gary have both got on the pitch in the league.

“What’s it done for them is made them more confident, they’re all stronger with their belief in themselves. We have a confident group anyway but it’s kicked them on to another level

“The standards they now demand of each other just through being in the first team environment has translated into what we do, it’s made them stronger.”

Liam Cox explained the next step for the Anchors, should they finish top of the Junior Premier League North East & Yorkshire.

“Things have been changed a little bit with Covid-19, the plan was to play all of the teams in our region and the teams in the North-West as well,” he said.

“That’s now different, if we finish top of the regional league, which we hope to do and we will try to, we will play the strongest side from the North West division.”

“If we win that, we then go to play the strongest sides from the Southern divisions.”