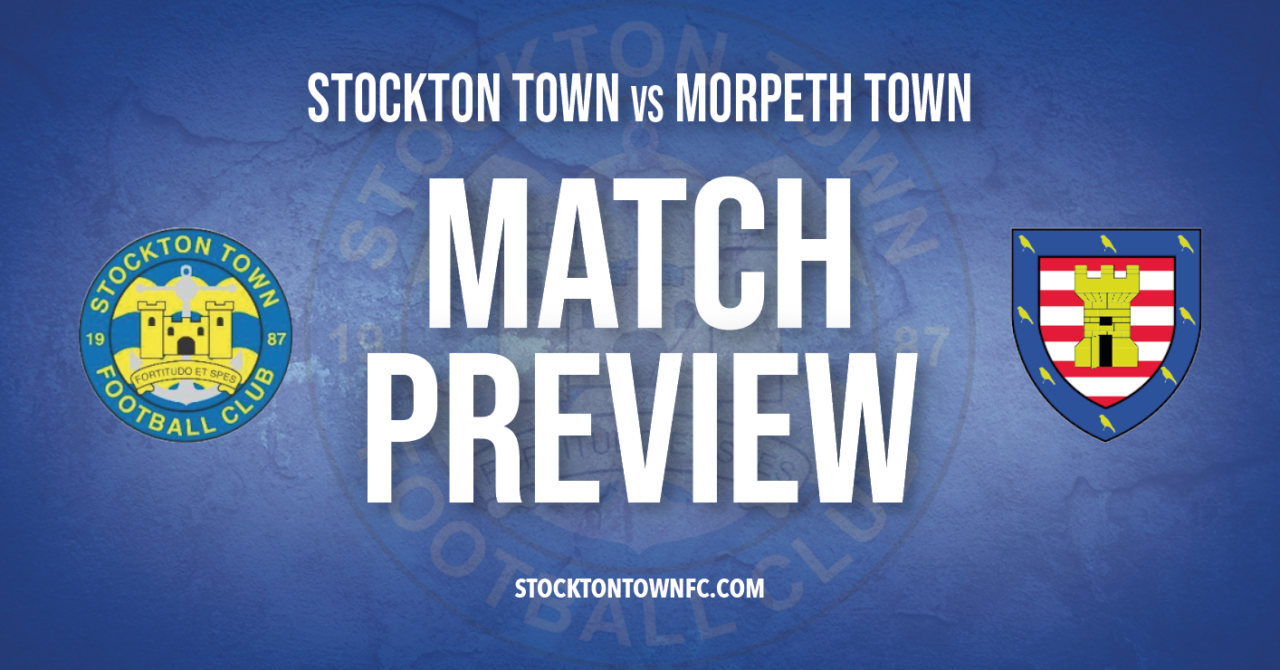 Stockton Town welcome Morpeth Town to the MAP Group UK Stadium for their first pre-season match ahead of the 2020/21 season.

The Anchors were top of the table and looked certain to be promoted when the 2019/20 campaign was declared null and void due to the COVID-19 pandemic.

Michael Dunwell has added to his pack ahead of the upcoming campaign, signing Shane Henry from Spennymoor Town as well as bringing Dale Mulligan back to the club from Shildon.

Henry has experience at National League level and brings that to the club, adding to the quality already at Dunwell’s disposal, as the club look to achieve what was denied last season.

The Anchors have no additional injury worries ahead of the Morpeth clash, with Nathan Steel the only absentee as he recovers from a serious knee injury sustained last winter.

Stockton have played Morpeth three times before, with the Highwaymen completing the double over the Anchors en route to promotion from the Northern League during the 2017-18 campaign. Stockton then won a classic League Cup Quarter-Final tie 3-2 at Craik Park in April 2018.

Morpeth Town currently reside in the Northern Premier League Premier Division, having finished ninth in their debut campaign, just five points from the play-off spots when the season was brought to a halt.

The Highwaymen won the FA Vase back in 2016 after beating Hereford 4-1 at Wembley, and two years later finished runners-up to Marske United as they secured promotion to the Northern Premier League Division One.

Morpeth have added to their squad over the summer, signing Connor Oliver from Gateshead and Andrew Johnson from Spennymoor. Oliver brings Football League experience to Morpeth from his time at Blackpool and Morecambe.

Michael Dunwell has commended the attitude of his squad after they reported back to pre-season fitter than ever. He said: “They’ve all come back really sharp, we gave them a six-week training plan and they’ve come back a lot fitter than last season, which was really hard to do.”

“They’ve all got a really good attitude and they try to be as professional as possible.”

Dunwell also praised the positive impacts Shane Henry and Dale Mulligan have had on the dressing room: “Shane is an experienced player who has played at a higher level for seven or eight years now. He adds leadership and a will to win, you can see in training he lifts the level of the players around him.”

”Dale was straight back into the mix [after returning], he’s a leader and great in the dressing room, he gets the lads going.“

“He’s competitive in all aspects, whether it be training or in matches, he’s a great addition to the squad.”

Speaking about the aims for the season ahead, Dunwell hopes to be at the top end of table again: ”Our aims are the same as last season and that’s to gain promotion and hopefully win the league.”

”It’s going to be tougher [this season], other teams have strengthened, made some good signings but we’ve had an extra year together.”

”We’ve also got another crack at the [FA] Vase, which we didn’t expect, we had a good run in the FA Cup last year, let’s see what can happen in those competitions as well.”