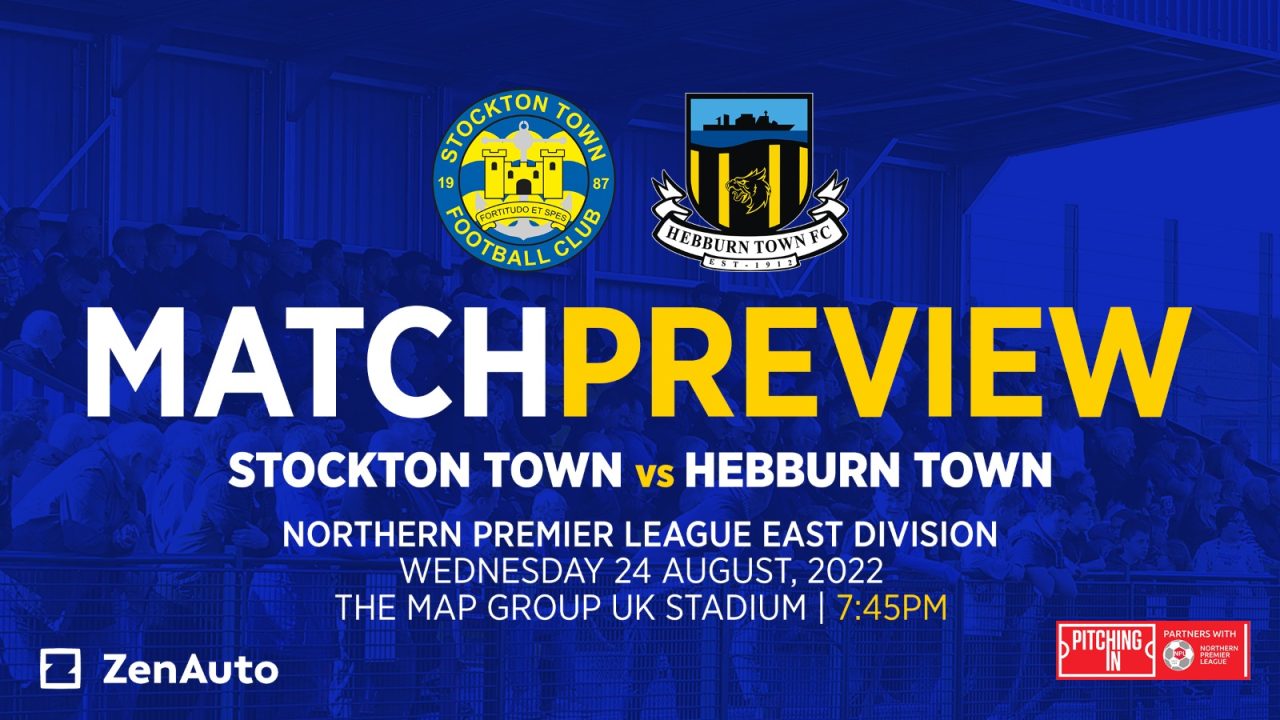 Stockton Town welcome Hebburn Town to the MAP Group UK Stadium for the first North East derby of the 2022/23 campaign.

In their last game, the Anchors were knocked out of the Emirates FA Cup at the Preliminary Round on Saturday after a 3-2 defeat at home to Pontefract Collieries.

Michael Dunwell has bolstered his squad in the last few days with the addition of former Middlesbrough and Scunthorpe United striker Tyrone O’Neill, who was an unused substitute on Saturday afternoon.

O’Neill could be line to make his senior Anchors debut, having featured for Stockton Town in the junior set up before making the step up to Middlesbrough.

Nathan Mulligan continued his fine start to the season with his third goal of the campaign against Pontefract, adding an assist with his cross to Adam Nicholson for the Anchors second goal of the game.

Stockton and Hebburn have met nine times in all competitions, with Anchors winning six of those meetings. Here are the results from the last five fixtures between the two clubs:

The Hornets came from behind on the opening day to record a 3-1 victory at Brighouse Town, before conceding late to settle for a point at Pontefract.

Whilst the Anchors were in FA Cup action, Hebburn narrowly claimed all three points at newly promoted Grimsby Borough to move to the summit of the table.

They have also strengthened on the field with the arrivals of Shaun Newbrook and Will McCamley from Shildon, Wayne Phillips, Joe Walton and Liam Henderson from Morpeth Town and Sean Reid from Blyth Spartans.

The Hornets have also added young winger James Harrison from Championship side Blackpool.

Hebburn boss Daniel Moore previewed the game for the club’s website, here is what he had to say:

“I’d say Stockton are favourites to win the league.

“Everyone will be expecting them to win, so hopefully we can upset the apple cart and give a good account of ourselves.

“It’ll be a good game – they’re a good footballing team and should be there or thereabouts come the end of the season, they’ve got very good players.

“We’re going to have to be at the top of our game to get something but our mentality is to go unbeaten all season – if we can’t win, we don’t get beat.”

Manager Michael Dunwell previewed the fixture after the Anchors defeat to Pontefract Collieries in the FA Cup.

He said: “It hurts to lose any game. You want to go on a run in the FA Cup.

“We’ll be back in on Monday before the Hebburn game to see how people are, it looks like Dan McWilliams has broken his ribs which we’ll have to address.

“We dust ourselves down and go again on Wednesday.