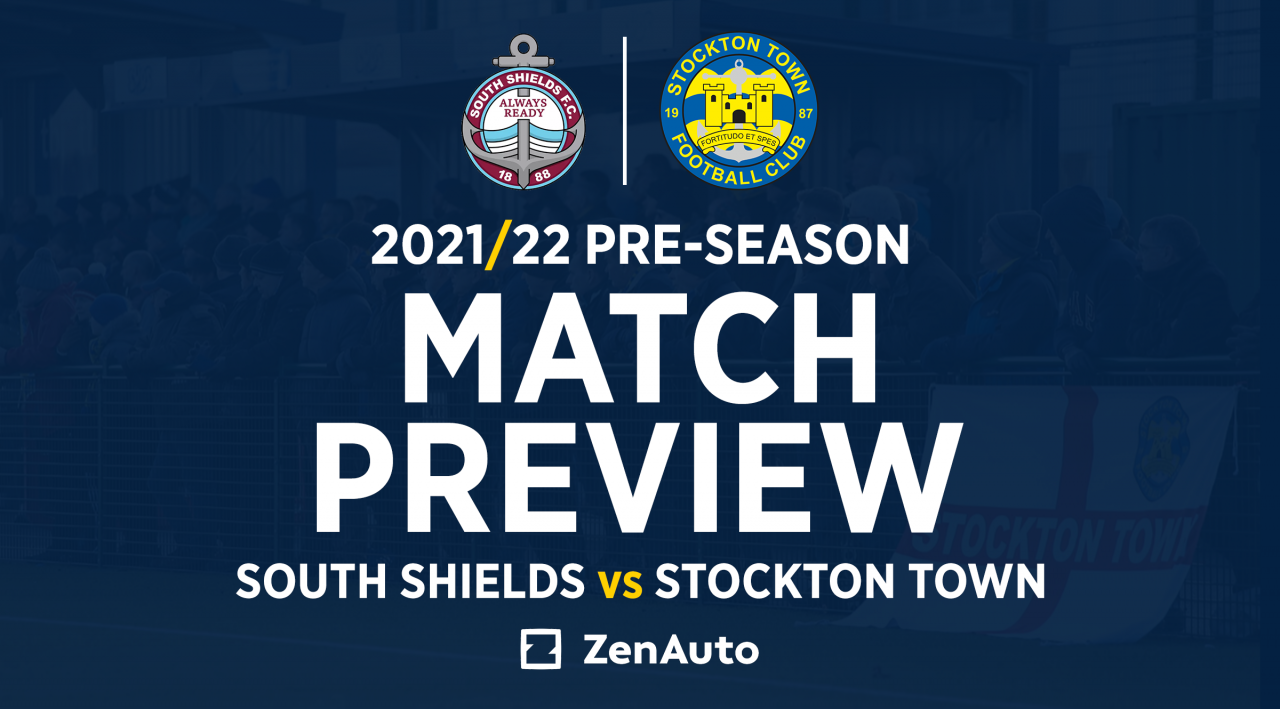 Stockton Town continue their preparations for the 2021/22 season with a trip to Northern Premier League Premier Division side South Shields on Saturday afternoon.

The Anchors have played two games so far in pre-season, which began last weekend with a dominant 3-0 victory at home to Guisborough Town – thanks to goals from Jamie Owens, Gary Mitchell and Nathan Mulligan.

Michael Dunwell’s side were back in action four days later and fired five goals past Billingham Synthonia, with Kev Hayes scoring a first-half brace.

Stockton and South Shields have only ever faced each other in a competitive fixture once before, with the Anchors coming from behind in the Durham Challenge Cup to record a 2-1 win on the road.

Saturday’s game will provide a stern test for the Anchors ahead of a historic first season at step four, with the Mariners set to challenge on all fronts for the Northern Premier League Premier Division title.

The Anchors have faced the Mariners just twice in history, once in a competitive fixture the Durham Challenge Cup in the 2019/20 season and then in a pre-season friendly – which took place last summer.

After their promotion from the Northern League in 2017, South Shields went on to make it back-to-back title successes after winning the Northern Premier League Division One North the following season.

This will be the fourth season the Mariners will be competing at step three, and with the club turning into a full-time outfit this summer, they are poised to make a title-run this coming campaign.

Striker Ntumba Massanka and former Doncaster Rovers Will McGowan have been brought in to bolster Graham Fenton’s side, while the big news for the Mariners this summer was captain Jon Shaw extended his contract.

There has been one departure at the 1st Cloud Arena as midfielder Luke Daly exited this summer.

As for their pre-season, the Mariners have had one game, where they comes through a test against Northern League Division One side Newton Aycliffe with a 1-0 win.

The turnstiles at 1st Cloud Arena will open at 12.30pm and purchasing a ticket in advance is strongly recommended, as the capacity of the ground has been set at 975 for this game because of coronavirus restrictions. A decision on whether a cash turnstile will be opened will be communicated on the morning of the match.

Supporters are advised that, because of the ongoing restrictions, food and drink will not be available for purchase from the outdoor kiosks at the 1st Cloud Arena. Drinks will be served indoors on a strictly table service only and the balcony will be closed on this occasion.

Turnstile 1 and 2 will be ticket-only and turnstiles 3 and 4 will also be in operation, as will turnstiles 5 and 6, which are situated beside the underpass next to the 3G pitch. Seats in the existing main stand will be available on a first-come, first-served basis.

“They’re on a pathway that is similar to ours, just a few years further on. We’ve thought that for the last five or six years.

“We’ve always done ourselves proud against South Shields. They’re a top club and a top team, and it’s always great to test yourself against teams higher up in the pyramid – that is what pre-season is all about.

“It’s going to be a real test. We don’t want to be chasing things because you leave yourselves open to be picked off, but it’ll be a different test than the first two friendlies.”