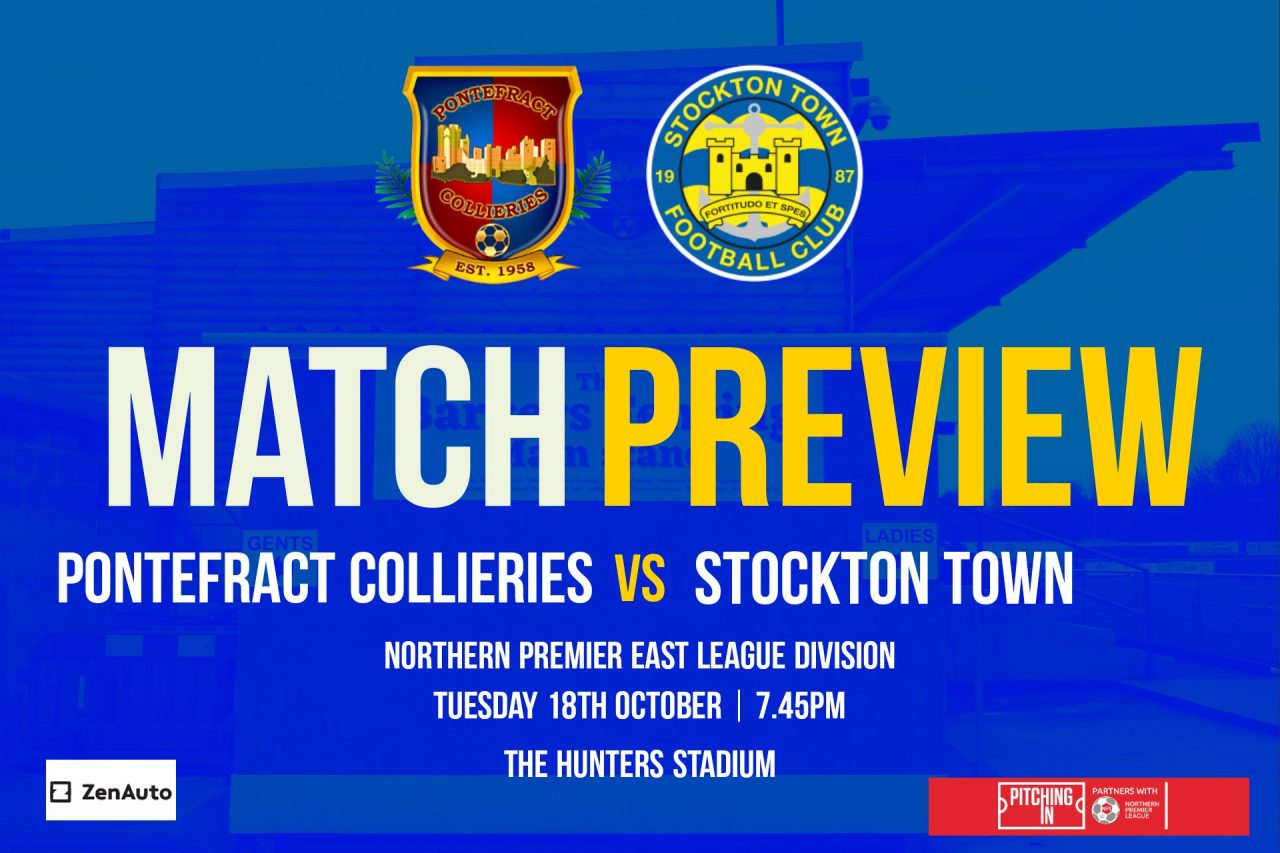 Stockton Town make the midweek trip to Pontefract looking to return to winning ways and extend their lead at the top of the table.

The Anchors lost their first league game of the season when they conceded a stoppage time goal to Dunston UTS.

Dunston led through a wonderful goal from Will Jenkins before Elliott Beddow levelled for Stockton with nine minutes remaining.

Stockton were unable to see the game out as Jon Shaw headed in a game-winner for the visitors.

This is the Anchors fifth away game in the league this season. On their travels so far, they have picked up an impressive 3-0 win at Ossett United, dramatic late wins at Stocksbridge Park Steels and Lincoln United and a respectable point with a 1-1 draw at Grantham Town.

The two sides have three times, all in this calendar year.

Pontefract Collieries come into the game on the back of perhaps their most impressive victory this season. The Colls stunned Cleethorpes Town with an emphatic 4-1 win at the Linden Club.

Ex-Gibraltar international Adam Priestley netted a brace with the other goals coming from Jack Shepherd and Gavin Allott.

That moved Pontefract into the play-off places where they are a point ahead of sixth place Consett.

On home soil, Ponte have had a decent record this season having lost only once in their six home games so far.

That came in their last home game when they lost out 2-0 to North Shields.

In other home games they easily dispatched Shildon 3-0, Ossett United 3-1 and Grimsby Borough 4-0.

This is the second meeting with Stockton this season after they triumphed 3-2 in the FA Cup Preliminary Round at the MAP Group UK Stadium in August.

The aforementioned Priestley was on the scoresheet that day as he bagged the late winner to send Ponte through to the First Qualifying Round.

Since that game he has went on to take his season tally to seven which makes him the club’s joint top scorer along with Allott.

“They are a really good side. Obviously, we have played them once this season and it was a game that could have gone either way. You know it was 2-2 with five minutes to go and the game was swinging end to end. Thankfully that day we nicked it.”

Rouse added; “It’s going to be a tough game, and, in my opinion, they are best side in the league at this minute in time and the league table reflects that.

“We have got to be on our game, and we have to turn up like we did today and if we do that, we give ourselves a hell of a chance.”

“Pontefract is tough. It was tough last year going there, and they have already beaten us once here in the FA Cup earlier on in the season. So, it will be good to get back out on the pitch straightaway rather than wait a full week to play again.

“I am sure we will be looking to put it right on Tuesday and the lads know today was disappointing but let’s not be too down on one defeat in the league after ten games. There’s a lot of positivity in the squad this season and we will take that into Tuesday.”