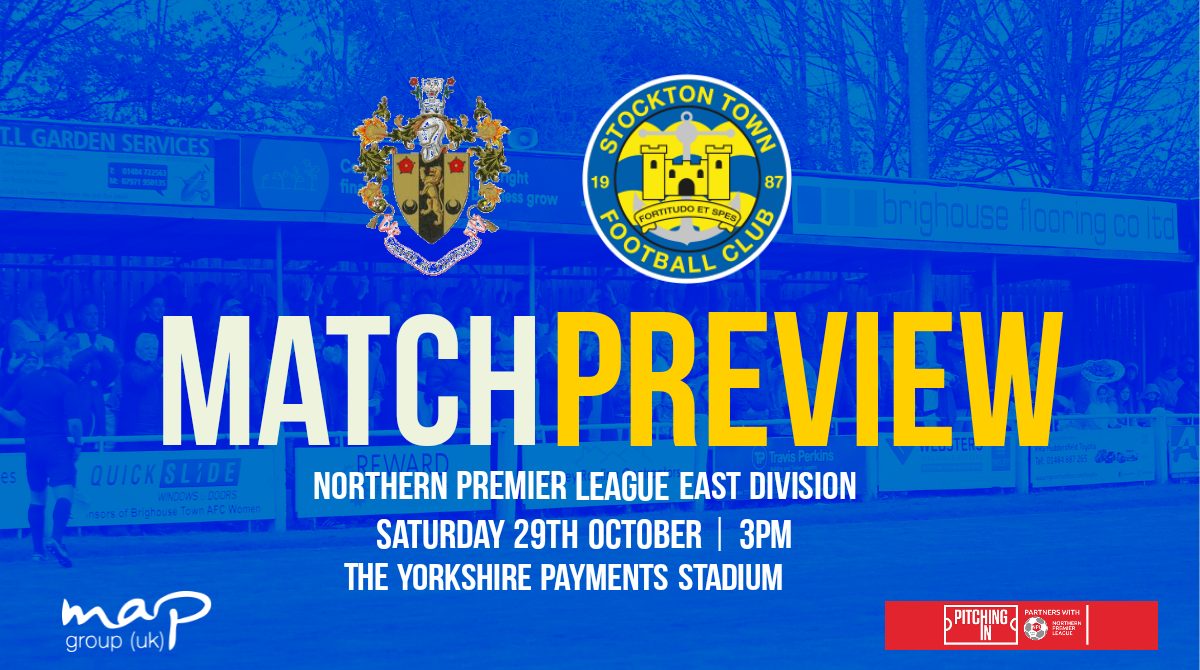 The Anchors remain at the top of the Northern Premier League East Division following a 4-0 win over Bridlington Town last Saturday.

A brace from Mikey Roberts in addition to a sublime free-kick from Nathan Mulligan and a second-half goal from Stephen Thompson sealed the points for Stockton.

It was a much needed three points following a small blip which saw Stockton lost two games in a row. First at home to Dunston UTS and then at Pontefract Collieries.

Both were dispiriting defeats as Stockton conceded a late goal in both games.

Manager Michael Dunwell has bolstered his midfield options with signing of Glen Butterworth from Marske United.

The midfielder has regularly been a top player on the Teesside non-league scene for a number of seasons and is a real coup for the club.

This is the third meeting between the two clubs. Last season Stockton Town won both meetings.

Brighouse Town are 12th in the Northern Premier League East Division after taking 14 points from their first 11 games.

They have struggled throughout October losing all but one of their games. Last time out they were well-beaten by Dunston UTS 4-0.

They have had a real issue in front of goal with just one goal to show for October. They have badly missed star striker Laurence Sorhaindo who bagged 26 goals last season. He is still two weeks away from recovering from a knee injury.

In defence there has been change, Harrison Beeden has left the club to join Whitby Town and he has been replaced by Josh Dacre from Goole AFC.

“We have just to keep fighting, as I say we have got to be better than today if we play anything like we did today it will be a difficult afternoon because they are flying.

“From our point of view, we have to dust ourselves and work hard this week, the boys know that, and we’ll get ourselves ready for Saturday.”

“Like we say, in this league every away game is a tough game, and Brighouse will be the same.

“They have had an okay start to the season, they started the season really well and I think they have had indifferent results of late, but it will be tough as all away games are.

“I think today’s win (4-0 over Bridlington) has got those losses out the way and we need to kick on now because we know that other teams are kicking on as well.”