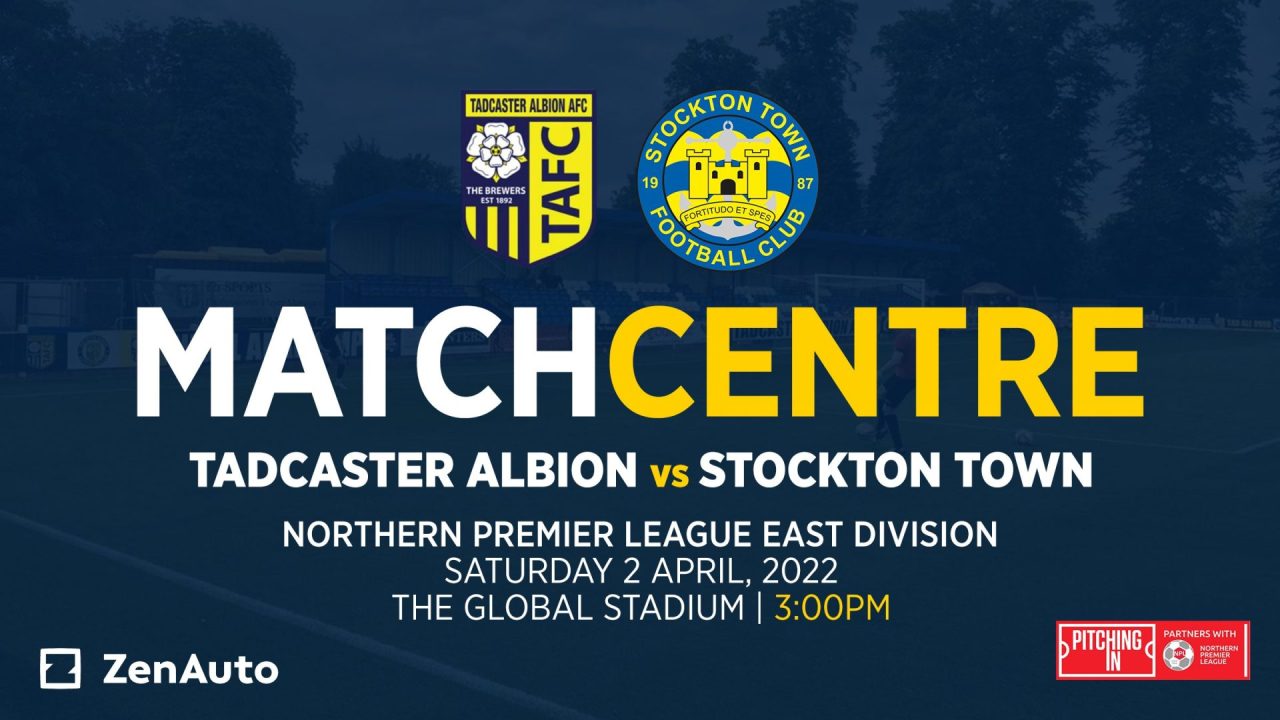 Stockton Town will look to move a step closer to securing play-off football when they make the trip to Tadcaster Albion.

The month of March saw the Anchors return to form as they remained unbeaten and capped off the month by winning back-to-back games.

Mercurial winger Kevin Hayes proved instrumental with a pivotal brace to turn the game in Stockton’s favour. He demonstrated his immense skill with his first goal – a stunning curling effort into the top corner from the edge of the right penalty area.

After getting the job done in back-to-back home games, Stockton are looking to win away from home for the first time since early February when they beat Yorkshire Amateur 5-2.

A win against Tadcaster, and results elsewhere going in the favour of the Anchors could mean that a point from their final four games would secure a place in the play-offs in their first season at Step 4.

The reverse fixture earlier in the season was the first time the two sides had met. Stockton Town ran out comfortable 4-0 winners with goals from Alfie Conway, Mikey Roberts, Dan McWilliams and Adam Nicholson.

Tadcaster Albion are 15th in the table and are three points ahead of 17th-place Sheffield FC, who occupy the relegation play-off spot.

They have struggled for form in 2022 with just three wins since the start of the year. All three of those victories have come away from home and against sides in the bottom half in Bridlington Town, Lincoln United and Hebburn Town.

Their last win at home came all the way back in October when they beat Bridlington Town 2-1.

Last time out they did take the lead when they hosted Brighouse Town through a Mark Ferguson penalty, but goals from Javelle Clarke and Laurence Sorhaindo – either side of half-time – turned the game around.

Striker Ferguson is one to watch for the Brewers. The 26-year-old signed from North Counties East League club Campion in January and has scored five goals since his arrival.

Attacking midfielder Donald Chimalilo also poses a threat. He made his return to Tadcaster this season and has scored seven goals so far this campaign.

Speaking after Tuesday’s 2-1 defeat to Brighouse Town, Tadcaster Albion manager John Deacey said: “They have got get their heads up and we have to go again.

“We have got five games to go and we have to make sure we get the points on the board.”

Speaking after last Saturday’s 3-1 win over Pontefract Collieries, manager Michael Dunwell said: “We have got two tough games coming up. Tadcaster away, they are at the other end of the table to stay in the league.

“Every game is tough, just like today was. Pontefract gave us a really good game first half. Yes we were not at the races but credit to them.

“We have got five tough games and till we are over the line into the play-offs that is our first target and then we will start looking to see if we can nick that third spot.”