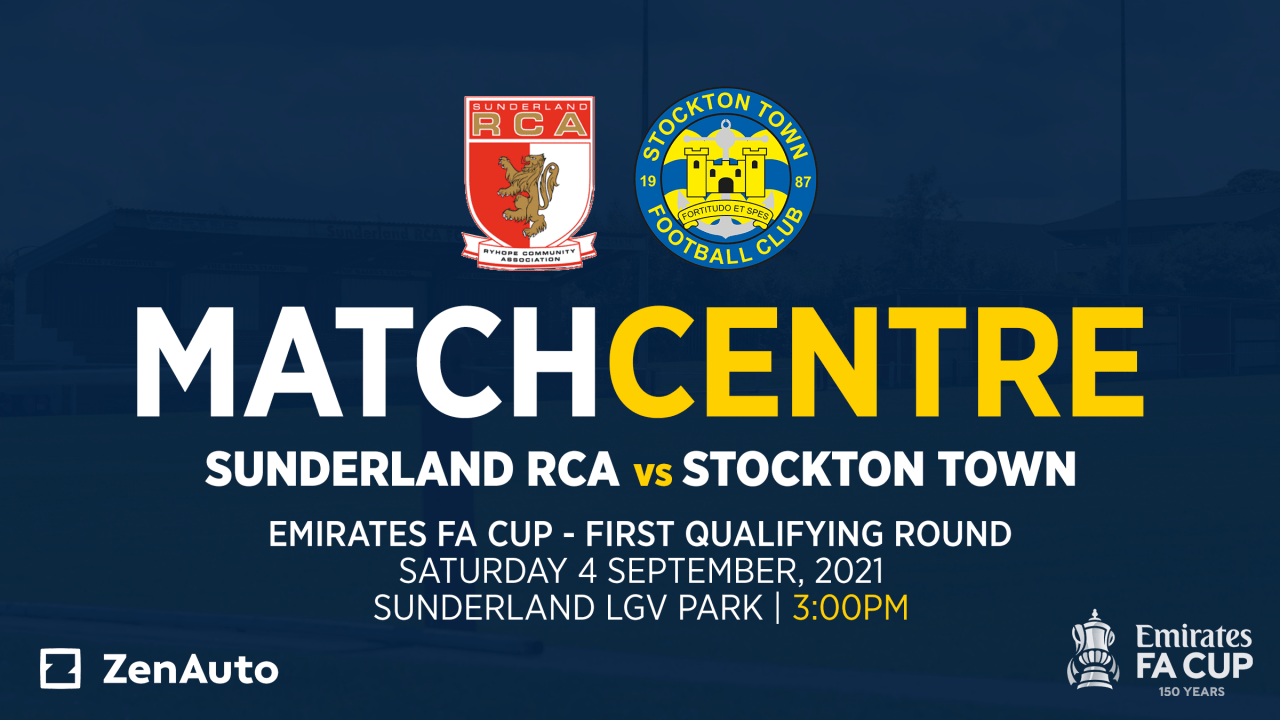 Stockton Town resume their Emirates FA Cup campaign when they travel to Sunderland LGV Park to take on Sunderland RCA in the First Qualifying Round.

The Anchors progressed to this stage after Jamie Owens’ second-half strike fired the side past Ossett United at home in the Preliminary Round.

This is the third occasion Michael Dunwell’s men have competed in the First Qualifying Round. Last season, they went out at this stage when they lost 1-0 at Consett – the previous season they won a hard fought encounter 2-0 at Liversedge.

Stockton head into this game following a tough Bank Holiday weekend. On Saturday, they lost narrowly 1-0 to Worksop Town and on Monday they battled hard with ten-men to end Shildon’s perfect start with a goalless draw.

Should Saturday’s match end level after 90 minutes, there will be a replay at The Map Group UK Stadium on Wednesday evening.

There have been ten meetings between Stockton Town and Sunderland RCA in total. Last time the two sides played, RCA ran out 1-0 winners – Stockton’s last away defeat in league competition.

The previous five meetings were:

The summer saw a big change at Sunderland RCA as long-serving manager Martin Swales stepped down after seven years at the helm.

Swales established RCA as a top half Northern League Division One club and steered to them to their best-ever performance in the FA Vase with a fourth-round exit.

Former Bishop Auckland manager Steve Riley was brought in to replace him. RCA have played six league games so far, winning two, drawing two and losing two – which has them sitting 14th in the Northern League Division One table.

The FA Cup has been where they have been most impressive. In the Extra Preliminary Round, they made light work of Bishop Auckland with a 5-1 demolition at LGV Park.

The Preliminary Round saw them record one of the more notable results with a 3-0 triumph at Frickley Athletic. Frickley have made a good start to their Northern Premier League East Division season, which makes the result all the more stirring.

Striker Mark Davison is the one to watch for RCA. Nicknamed ‘Sparky’, Davison has been among the best goalscorers in the Northern League for a number of years now, and has only continued that into this season.

Davison netted four times in the win over Bishop Auckland and helped himself to a goal in the away victory at Frickley.

“The draw was on Monday, and we received Stockton Town, who we know will be a very difficult opponent, but hopefully the home advantage will help and we can get another positive result.”

Speaking after Monday’s goalless draw at Shildon, Manager Michael Dunwell said: “I think the squad is full of confidence.

“Saturday’s defeat (vs Worksop) we’ll take it on the chin because we finished that game stronger and we had chances there but we’ve got to put them away.

“We go to RCA looking to get through to the next round of the FA Cup and if we do we’ll equal our best-ever run. Hopefully we can go there, put a performance in and get the result we require.”

“RCA have caused us problems in the past and you know what you’re going to get when you go to their place, it’s going to be a tough game.” Franks told Anchors TV.

“We’ve got to go there and earn the right to play. Just because we’re the league above doesn’t mean we’re automatically thinking we should win this. You have got to earn the right whatever game you play.

“So, we’ll go there and hopefully we can come away with the win and progress.”